Isn't it amazing that there are people up there drifting around the earth in a massive lump of metal. I was doing stuff on the computer this morning and the International Space Station popped up on the side bar. The astronauts were about to go out on a space walk and do some repairs. Everything is in slow motion, there is a detailed commentary describing what is happening, and they show different shots from different cameras. At last someone came out. Amazing. 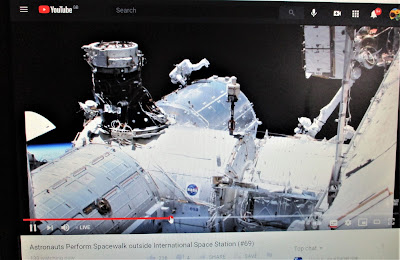 It's general waste bin collection day today. I only have one bag so it's not worth me dragging my bin up to the front for that. I put my neighbours bin out because he is always busy, and popped my bag in there.
It's been like the first day of spring today. Not a whisper of a breeze, very mild, and the sun came out mid afternoon. I went a walk around the village. There is a new cinder track around the perimeter of the playing field, so I included that. A small group of lads were playing footie, and a boy was climbing a tree while his day looked on. As I was heading towards home there was a lovely small of fish and chips. The mobile chippy van was on the way to his usual spot on the playing fields car park. It seems very popular, always has people waiting when I have been past while they were serving. I did ask once what they cooked their chips in. They use animal fat, so that was a no thanks from me then.

When I got back there was still a bit of daylight left so I spent half an hour on my hands and knees pulling weeds up.

I have just finished the last portion of stew, I'll make another one tomorrow.

Thanks for popping in. Catch up soon. Toodle pip.   ilona