There is a saying, look after the pennies and the pounds will look after themselves. A common sense way to manage finances which has served me well throughout my life. Save a few pennies here and there and you can't go wrong. Prioritise spending and the pennies turn into a lot of pounds over the course of a year. 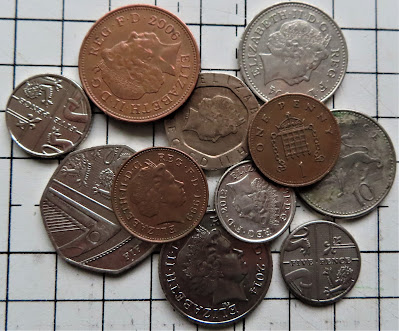 I was talking to a friend yesterday . She has recently been to the Audiology department of the local hospital to get a new hearing aid. The old one gave up the ghost a long time ago and she is just getting round to replacing it.

It seems the system they follow now regarding replacing batteries is a lot different from when I had my first hearing aid in 1999. They gave me a little booklet to fill out, to keep a record of when I collected a new pack of six small batteries. The booklet is looking  a bit battered now, but I have followed their instructions to the letter. At first they only gave me one pack, but a few years ago they increased that to two packs so I wouldn't have to go so often. I get them from the nearby surgery so it is no hardship to walk across the road to pick them up. 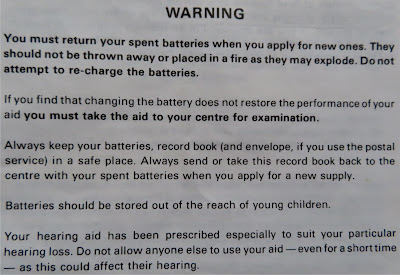 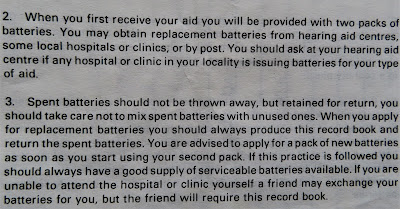 I was recently been thinking about not wearing my hearing aid around the house when I didn't need to. That would save a few pennies by making my two packs last a bit longer.

However, the conversation with my friend yesterday shocked me a little bit. They gave her a new hearing aid, with instructions that she had to wear it every day, all day. She has to change the battery every seven days. That seems a bit crazy to me, not to let the batteries run down to completely empty before discarding them.

My friend asked for some extra batteries, knowing that she was going to need them over the next few months. The receptionist said, just help yourself, take as many as you want, they are on that table over there. There were several baskets piled high with battery packs. My friend took a handful. She told me I could just walk in and take as many as I wanted and no one would question me. I won't though because that would meant a trip to the hospital in town, and I would rather not go there. I will continue to get my two packs from the surgery here in the village, and present my little booklet to keep the record straight.

I thought the NHS was strapped for cash. When you think of the millions of £'s they must be spending on batteries, and giving them away, it is mind boggling. Mind you, didn't they spend mega millions on PPE, with a lot of it now being surplus to requirements. There doesn't seem to be any attempts by them to budget their finances. What are they paying their managers for? Spend and be damned is their policy.

Their mismanagement is costing thousands of lives. The people who can't get to see a doctor, can't get tests done, can't get a diagnosis, and can't get treatment. But you can  get as many free batteries as you want for your hearing aid.

I will be back later with some pics of Leyburn. Toodle pip.   ilona