Lessons from my mum.

I was just thinking the other day, that those of us in our fifties now, who were children in the 1950's, are probably one step ahead of most people in this so called credit crunch. Our parents had to work through hard times after the war, things were in short supply so there was a lot of make do and mend going on. Mum taught me how to crochet, knit, and sew.
I can picture my mother now on her old treadle sewing machine, she made all the soft furnishings, curtains, cushions etc, and most of her own dresses. When I was old enough to use the machine I followed her example and made my own clothes. I remember I had a good line in mini skirts going, I would get a piece of fabric off the market and knock one up in a couple of hours, then I sold them to my mates.
My mum was an expert at making tasty meals out of not very much at all, another talent I have inherited from her. We always went picking elderberries together and came back with masses of them. It was our job to strip all the berries off the stalks using a fork, then they would go in a big pot and simmer on the stove. They were strained through cotton fabric several times and the juice bottled up. This was our Ribena, we thought it was lovely, much better than the shop bought juice which we couldn't afford.

March 20th is the aniversary of my mum's death, she died 27 years ago aged 64, she would have been 91 on March 4th. This is a picture of her first son, my elder brother Ingo. She made all his clothes, here he is wearing a knitted jumper and trousers, with matching socks. Isn't he a lovely little fella? He lives in Bremen, Germany. 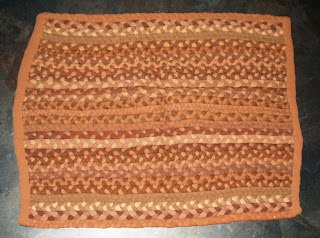 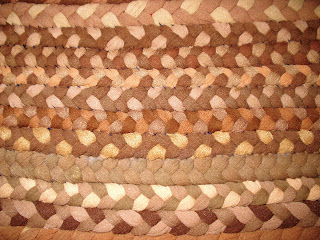 I can't part with this door mat that mum made out of plaited tights. It's never been used, and I keep it in the sideboard that I inherited from her. Isn't she clever making this, just one example of her many ideas.

I found this photo of her, proudly holding the prize she won for the best Easter bonnet, her friend and next door neighbour, Mitti, is on the left. She had a creative flair for anything and could make amazing things with a few scraps of fabric and a needle and cotton. 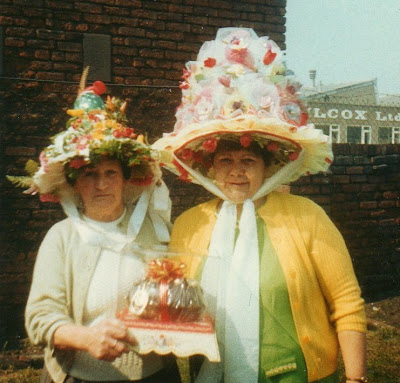 It's a shame that younger people don't have role models like this any more, I have got a lot to be thankful for, my mum taught me everything I know about looking after myself, thanks Martha Elizabeth Helen, my mum.
Daily spend - nothing