Shopping this morning, Carol needed to get some last minute things to finish off the buffet she was preparing for her 60th birthday party tonight. While she was doing her thing in Tesco I did my usual hunt the bargain game. Not a lot to be found we were a bit too early for the reductions, however I did get a big bag of spuds, carrots, and parsnips, reduced to £1.40, that will make six meals for me next week. I also got a bottle of wine so we could start celebrating as soon as we got back.

Later, Carol spent a couple of hours in the kitchen, but I am more an outdoor person so I left her to it and did some weeding and hedge trimming for her. I had given her three small bushes that I had grown from cuttings so she showed me where to plant them. Then we took all the food to the club in readiness for tonight.
That left one more task to do, get ready for the party. Carol is a member of a social club and helps organise some of the events, all the members were invited, and as is the custom, everyone makes a contribution to the food, there was loads of it. The party was great, lots of dancing, eating, and drinking. We were planning on walking home but some kind soul offered us a lift which was a good job because we ended up with lots of presents to carry. This is Carol and her cake. 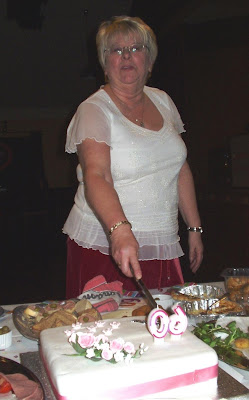