A walk with a bonus

It was a bright sunny morning, this morning, so as soon as I had my breakfast I was out the door for a walk. The footpath behind our church leads onto what we call the Hills, a series of mini ups and downs along a wide grassy area. It runs high above the River Trent as it joins the River Ouse. I have walked this path many times before, but each time I get a thrill as I marvel at the spectacular views, I never tire of it. It takes one hour to walk to Alkborough, and this is what you find when you arrive. Julians Bower, a maze cut into the turf. This was first recorded in 1697, it stands high up on a plateau. In 2007 it was closed for three months for restoration. 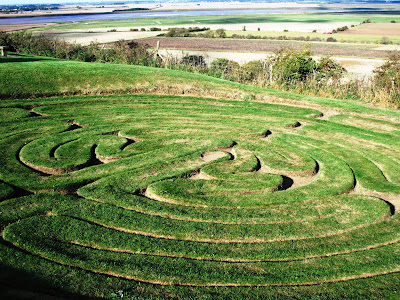 I walked down the steep hill to the Alkborough Flats. It has been developed as part of the Environment Agency’s flood risk management strategy. In September 2006 a 20m wide breach was cut into the flood defence bank allowing up to170ha to flood during the highest tides of the year. The site is designed to act as a flood storage area in times of extreme weather, primarily during tidal surges which will reduce impacts of flooding along the Trent, Ouse and Humber.

Just as I reached the bottom of the hill I saw a hovercraft about to leave, there was no time to take a photograph, with a loud roar of the engine it was gone. I wondered how long it would be away for, so I had a walk round and waited for it to come back. About two hours later it appeared and guess what, I was in the wrong place to get a good photo :-(
This is the best I could do. 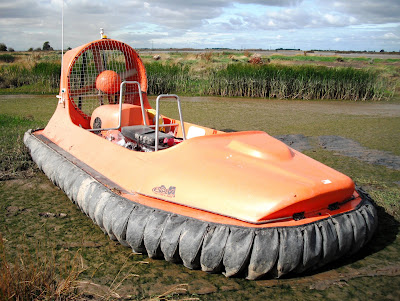 I had a chat with the two people that had been using it. The young lady was working for Hull University and they had hired the craft from a company a few miles up the river in Barrow on Humber. The reason why they were away so long was because she has to take hundreds of samples from the mud, so there is a lot of stopping and starting. After their lunch break they were going to go out again, but I didn't wait around, it was getting a bit chilly. I took a few photo's of the flora and fauna. 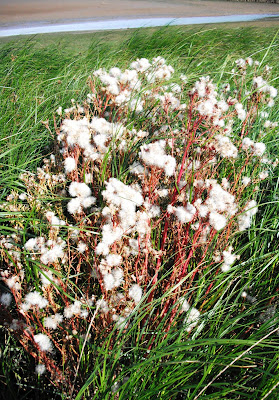 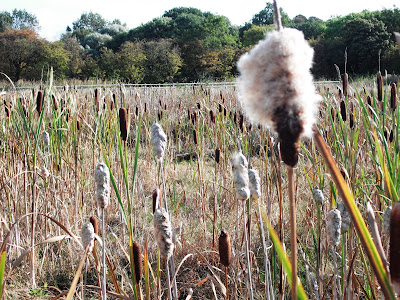 On the way back I stopped to chat to a couple who were sitting on the bench at the maze. They were on holiday at the caravan site, so I was able to suggest places for them to visit. Then half way back I came across five men who were sitting on their fold up chairs, flying their radio controlled model aircraft over the edge of the steep bank. They were very friendly answering all my questions, no one would let me have a go though. Boys and their toys, ha ha.
What an interesting walk, you never know what you are going to find, it was a bonus to see the hovercraft. I was out for six hours, completely missed lunch.
Posted by Meanqueen at 20:34