The hovercraft is back

I was a bit more successful with the hovercraft photo's this morning. When I saw them on Wednesday they said they would be launching further along the river bank today, just down the hill in Burton upon Stather. I didn't know what time but I took a chance and went to have a look for them. Sure enough the orange blob was highly visible from a distance. 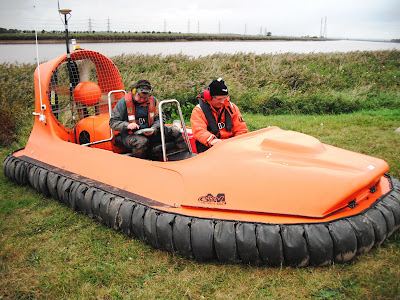 They were almost ready to launch, and in place of the young lady from Hull University, the passenger this time was a man who was going out to measure the contours of the waters edge. The pilot cut the engine for a few minutes to chat to me, and I cheekily asked if I could have a ride, not expecting a yes, but if you don't ask.......He said the regulations don't allow for passengers that are not part of the official business, all kinds of permits have to be applied for before any craft can go on the river. I discovered that the pilot is also the owner of the hovercraft, Dr James Thurlow, he gave me his card. The company is called intertidal, here is the website if you want to learn more.
http://www.intertidal.net/ 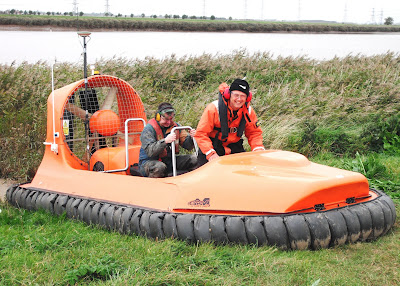 I would love to be able to go on one of these, and even learn how to pilot one, but I feel my age is against me, I have missed the boat :-( I remember how excited I was when I learnt to drive a lorry, got my first job, and several years later worked for Leicester Heavy Haulage transporting abnormal loads, the buzz was fantastic. My work often involved massive cranes, something else I would have loved to learn. But there was three things against me, my age, I should have started lorry driving earlier, the fact that I was born female, not a problem for me but it was for other people, and the cost of the training. Never mind, I'm going to put my cosmic order in for another life, there's a lot more to do, and I'm going to need another go at it :-) 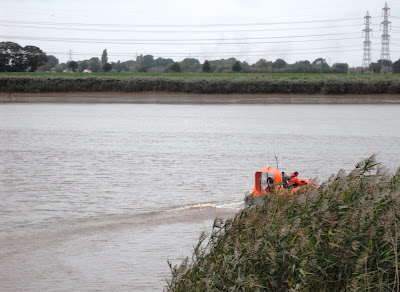