Brrrrrr it's cold outside

We've had some heavy snowfalls over the last couple of days, looks pretty but not nice to drive in. I got my car back from the bodyshop yesterday, the paint job looks ok, but it will have to go back because I can't open the rear passenger door from the outside. Seems they took the door handle off and didn't but it back on correctly.

I went to the Scrapstore this afternoon for a natter and a coffee. They are closing now untill the new year. My friend Sue rang me while I was out, she thinks someone has found Bigpuss, so I went and picked her up. We went to a womans house with a cat basket but there was no one in. According to the description the woman gave her on the phone it sounds like it could be the lost cat. Now we are waiting for a phone call to go and collect it, as Sue has an empty chalet, and we can keep it there while we get some posters up around the village. The plan is to get it back to it's owner, but we are wondering if the owner actually wants it. If I lost a cat I would have posters up all over the place and leafleting, within hours of it going missing.
My brother who lives in India emailed me yesterday to ask if I have Skype, so we can talk to each other. Well I haven't, but I bought a webcam while I was in town, so now I have to download the programme from the site and get it set up. I'm not sure how it works but I'll give it a try. My sister is also going to get set up with it, I'll let you know how it goes.
I was rather hoping to go out tomorrow, but with the roads being icy it would be madness to set off on a two hour journey if you don't really have to. I wanted to go to the Dickensian Christmas Market at Grassington in North Yorkshire, the photo's of last years event look fabulous. Such a disappointment, but it's not worth the risk. The journey could take a lot longer if there are hold ups because of accidents.
It looks like I shall have a lodger next week, I have offered to have Ben while his owner goes down to London. She could have taken him with her but it would be a lot of hassle staying in a hotel with a small child as well. I am not doing anything in particular so he might as well share Christmas with me and the cats. I've got to get them all their pressies yet, some chicken and tasty treats might go down well. I thought I would put this spring picture in here to remind us of warmer times, and to cheer us up a bit. He is gorgeous. 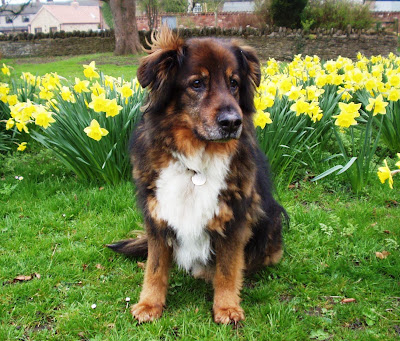 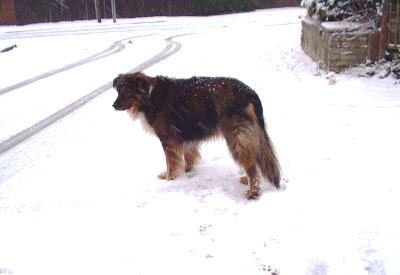