Let's lighten up a bit, are you getting into the Christmas spirit? This made me smile, my friend emailed it to me, cute kittys, all say Aaaarrrrhhhhhhh. 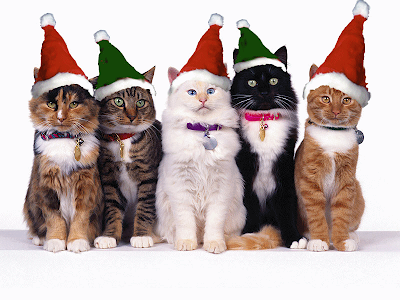 Talking of cats, there is a lovely big ginger cat with a massive bushy tail around here, when it sees me it meeows like crazy and follows me. I was talking to my friend Sue about it who fosters cats, she has seen it as it hangs around the medical centre where she works. We are not sure where it lives or even if it has a home.

I used to see it a few months ago, always in the garden of the house on the corner opposite the medical centre, but then it vanished. Now it is back. I think it has been in my house and stolen some food from my cats dishes. I was at the top of the stairs and caught a glimpse of a bushy tail disappearing out of the back door, I always leave it open so my boys can come and go as they please. At first I wondered if it was a fox, but I reckon it was big puss.

It followed me last night and I picked it up, it seemed keen to stay with me. The fur underneath it and round it's back legs is a bit dirty and matted, but it wasn't skinny, as far as I could tell. I put it down and it followed me again. I was going to bring it home and ask around if it belongs to anybody. Not that I really want another cat though, but Sue would find a home for it if it is homeless. Anyway, big puss jumped up a six foot high fence and down the other side into a garden. I went back later to look for it but the paddock was awash with people carol singing around the tree, so I suppose puss was keeping out of the way.

I spoke to Sue later on the phone and we couldn't decide if it belonged to anyone, so we thought we would ask around first before we catnap it. Sometimes people go out and leave their cats to walk the streets all day and night, which I think is terrible. I got my Lilly because his previous owners didn't care about him, he lives a life of luxury here with me now, compared to the dog kennel at the bottom of the garden he had before. That reminds me I must send them a Christmas card, from Lilly, or Smartie as they used to call him. They will probably be surprised he is still alive.

I'm going out in a bit to walk Ben, my friends dog, so I'll take the camera and see if I can get a snap of big puss, and knock on a few doors in that area. By the way, the cat's faces are supposed to nod in the picture above, but it hasn't worked. :-(
Posted by Meanqueen at 11:46