Up at the crack of dawn today, well not quite, 7am to be exact, Henry wasn't going to let me lie in bed any longer. After a swift cup of coffee we were out by half past, and onto the hills . I took my litter picker stick and a bag with me because I noticed that the wood was looking a bit raggedy the other day, with lots of cans, bottles and fast food cartons lying about. I felt much better knowing I have beaten the litter louts, they chuck it and I will clear it up. I will not tolerate such a mess in our lovely village.

Back home for breakfast, then an attempt to do some craft work. Henry was having none of it and pestered me for a game with his ball. Then I went upstairs and put the computer on. Five minutes later I heard a lot of barking and went to see what was going on. Henry wanted to go into the living room but Bugsy cat was sprawled out in the hall, having come out of the window because he was too hot in the sun. Poor Henry dare not try and get past him, and Bugsy was enjoying being top cat. It's funny to see such a big dog scared of a fat old pussy cat. They have never come to blows yet, but I think Henry knows his place.

By 11.30 I could see Henry was getting bored and the easiest thing to do to entertain him is go for another walk. The sun is lovely again with a slight breeze. We went through the woods on the other side of the village, and along the edges of the fields. Henry stopped to nibble on some lush grass so I lay down next to him. I just love lying on the ground looking up at the sky, I am so attracted to mother earth. I lie down with the cats in my garden sometimes. It was an opportunity to get close to Henry and take a few snaps. 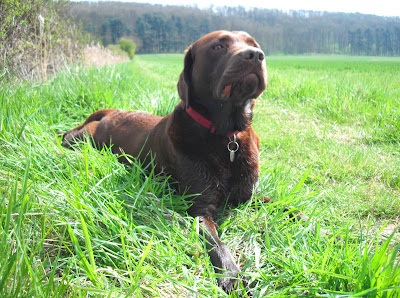 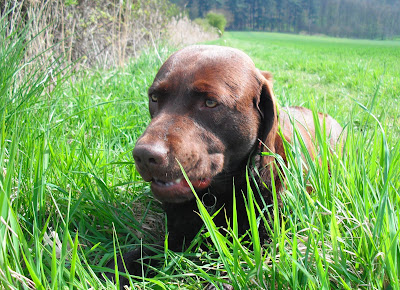 This is what Henry likes doing best. He runs around frantically to find any drop of water he can, then dives into it. You just can't stop him. 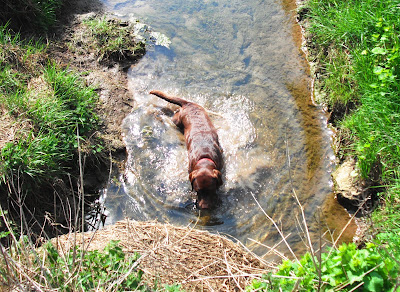 On the way back we met a man with a young German Shepherd called Ziva, and we walked together for a while. The two dogs were having great fun. I like to see dogs getting on with each other, it is vital to get them to socialise from a very young age, then there are less problems later on.
Yesterday we met a man with a snappy spaniel type dog, who didn't like Henry very much at all. The man grabbed it by the collar and shouted at it, saying 'stupid dog'. I didn't say anything but I wanted to, I can't always think quick enough. It was the man who was stupid not the dog, for not having trained it properly.
I've just had a phone call from Helen, she will be here in an hour to pick Henry up. He's snoozing on the bed right now, but you can be sure as soon as the door opens he will be leaping about all over the place with excitement. I'd better get his bag packed.
Posted by Meanqueen at 14:11