These four pictures are of the space between two warehouses which has been covered to create a courtyard joining them. There are modern stairs and a lift supported by an iron frame with a canopy to give full protection from the weather. A huge totem pole is lurking just inside the door to give you a fright as you walk in. 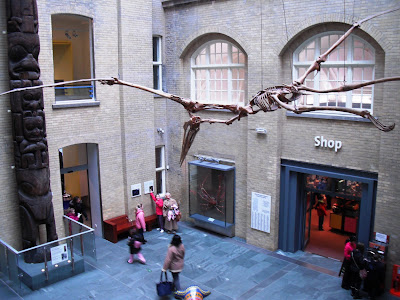 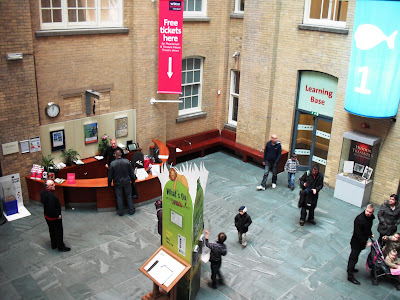 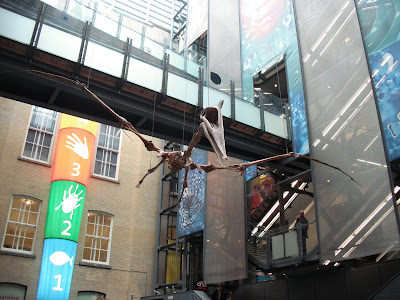 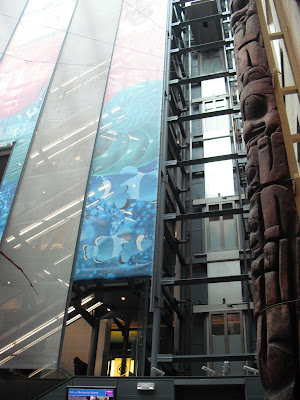 This is deceiving, I bet you think it is a church, well it was. It was built in 1831 and was bombed in May 1941, and never repaired. Here you see an empty shell. 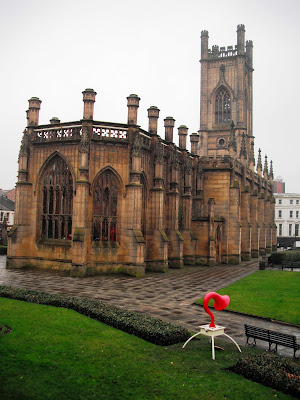 I particularly like the way Mother Nature is slowly reclaiming her territory with the ivy creeping up the walls and over the broken windows. It's like she is smothering it in love to protect it, like a mother would hold a child that is broken. 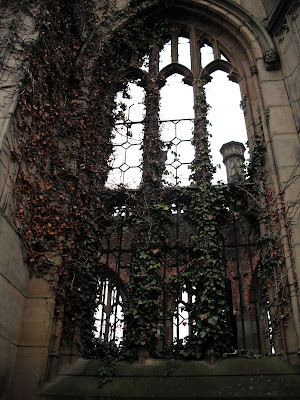 Here is a splash of colour to brighten a dull and cloudy day. The entrance to Chinatown on Cornwallis Street. If you look through the arch you can see Mr Wong's shop. 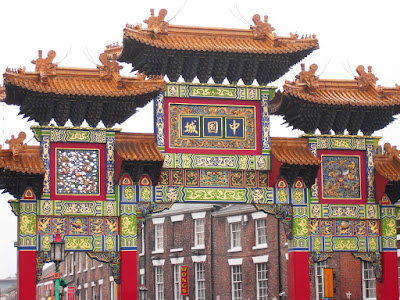 An electronic billboard and the radio tower. 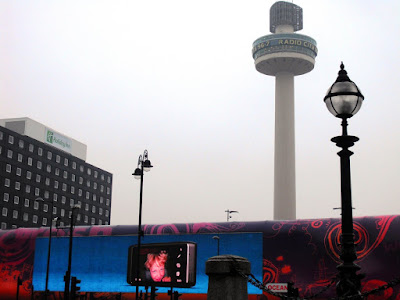 And one for cat lovers, especially Janet and Sue. 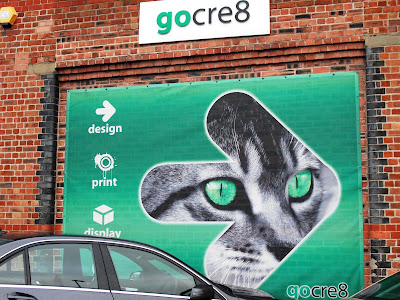 I went to see 'Corrie' the show at the Empire Theatre, while I was there. It was a whiz through some of the highlights of 50 years of Coronation Street, with Ken Morley, who played Reg Holdsworth, as the narator. I have followed it on and off since it started, but some of the scenes were a bit lost on me because I had missed those particular episodes. You have to be a Corrie fan to understand what the show is about. I must say that Ken Morley had a very posh voice which didn't sound right. It was a micky take, mainly comedy, so his Reg Holdsworth voice would have been more in keeping with the entertainment theme.

All the parts were played by just six cast members, who made a fine job of mimicking their characters. Linus Roach was spot on as he played his father Ken Barlow. You just had to laugh as yet another of Gails husbands bit the dust. Ena Sharples was a bit disappointing as the woman who played her was far too small and petite, Minnie Caldwell and Martha Longhurst towered above her. From what I remember Ena was the larger than life battleaxe.
Just before the show started two people claimed their seats in front of me, I thought, I know his face from somewhere. It was Jimmy Corkhill from Brookside, or should I say, Dean Sullivan who played him. I've just looked him up and apparently he now presents a radio show on Liverpool City Talk 105.9FM.
At the end of the show I noticed Roy Barraclough who played Alec Gilroy, he was married to Bet Lynch, in the soap. He was busy signing autographs and having his photo taken. I've had a peak at the Holy Soap website and it says, Roy will be doing his stint as the narrator of the stage show, but it doesn't say which venues he will be performing at.
Here endeth my Liverpool report, I hope you found something of interest.
Posted by Meanqueen at 12:34