On the way back yesterday, the traffic was horrendous on the M1 going through Derbyshire. We were queueing on the slip road at junction 28, the overhead matrix signs were flashing 40mph, I wished we could get up to 40mph. They now have traffic lights controlling the flow of traffic onto the motorway, but it didn't make any difference, we were still going nowhere fast. Stop start, for ages. When this happens I just sit tight in my lane, and go with the flow, no point in getting het up, no amount of screaming and cursing will make any difference, so best to turn the radio up and switch off the brain.

Here in the sticks we don't have traffic jams, it's lovely, I can bimble along in my own sweet way with not a care in the world. But when I venture further afield and join in the jostle for my bit of space on the tarmac, it isn't much fun. How can people live like this all the time!

I read somewhere, can't remember where, that they did an experiment and took away the traffic lights at a major junction, and guess what, the traffic flowed much better than it did before. Nobody was getting stressed, they were all carefull, and polite, and took their turn. People had to pay attention and watch what they were doing, as opposed to following instructions. They had to think for themselves. I think this is a wonderful idea, let's go and chop all the traffic lights down ;o)

Anyway, I crawled along last night, making a mental note of the vehicles in the other two lanes, to try and work out which lane was moving the quickest. I think it's funny to watch the drivers who come down the slip road, push their way in right at the front, then quickly move over to the centre and third lanes, because they think they will be the quickest. I make a note of these cars, then chuckle when they are at a standstill and I am tootling along in the first lane. Ha ha, bye bye.

Did you know that there is no such thing as a fast lane, they are all fast, when the traffic is moving. The correct titles are First Lane, Second Lane, and Third Lane. Last night there was no fast lane for about ten miles, they were all slow.

We passed a sign which said 'Stranded Vehicle', and I wondered which lane it was stranded in. My question was answered with the next sign, Third Lane Closed, the drivers in that lane started to move over. Some of them kept going, even gathering speed in the third lane, as it started to flow more freely. Cheeky beggers I thought, they will be trying to push in further ahead, I'm alright, tootling along in the first lane.

Then all of a sudden we passed a sign saying Road Clear, what a bugger, we have been crawling along for ten miles or more, and there is nothing there! With all the technology they have these days, you would think they could invent a system which turned the signs off once the obstruction had been removed.

I would love to have control over those signs, would love to sit there with a bank of monitors in front of me so I could view the situation and tap out my messages to the motorists on a keyboard. There would be none of this polite namby pamby talk, it would be 'Slow down you assholes, there's a mangled mess up ahead'. Then, 'Get of this damn motorway, there's far too many cars on it'. And when the mangled mess had been cleared up, the next message would be, 'For Christ sake, get a move on and sod off.'

Wonder if I could shift this mother of all traffic jams, with a few well chosen words, ha ha. 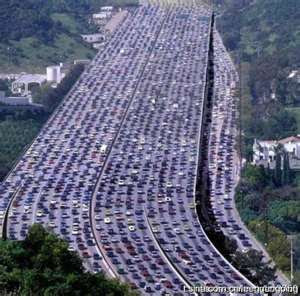 I hope the M62 is running ok tomorrow. Sees you when I get back.
Posted by Meanqueen at 20:25