Bit late tonight, ran out of data on the dongle, attempting to purchase more on line, (it will let you do that), then forgot what my security code with Tesco is on the credit card, so had to register a new one, what a performance. Anyway, a couple of pics from last night. My three friends, Carol, Shirley, and Pam. 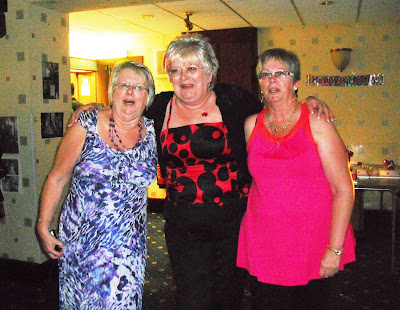 Me and Caz. It was great to see them again, and some other people that I hadn't seen for many years. Aunty June and Sandra, another Sandra, and Donna, can't remember everyones name. 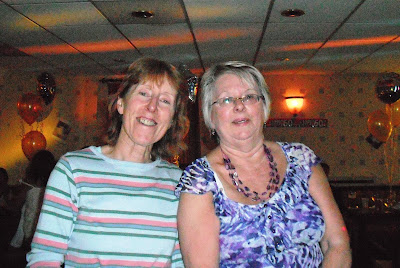 A quick run down to the seafront before breakfast to get this picture, that's South Pier behind the sign. I got away at 9.45 and headed out towards the Ring Road. I got a bit lost around Marton Mere, they have built a lot of footpaths and bridleways around the water, great for disabled people, horse riders, and cyclists, but difficult for anyone following a map because there are now many more routes on the ground than there are on paper. I eventually figured it out with a bit of help from a passer by who saw me studying the map. He was gobsmacked when I told him where I was walking to. 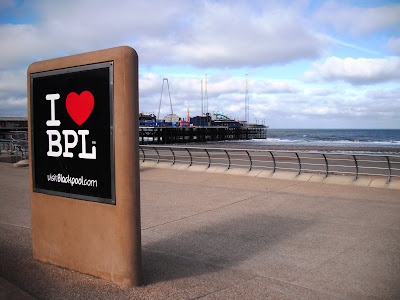 I reached Staining. The place is all neat and tidy, with flowers along the verges. 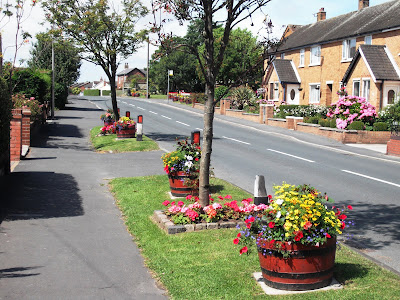 I took the road to Weeton because there wasn't any suitable footpaths. At least I could make up a bit of time. There was a sign saying six miles to Blackpool, and it had just taken me three hours to get there. I need to go a bit quicker than that. 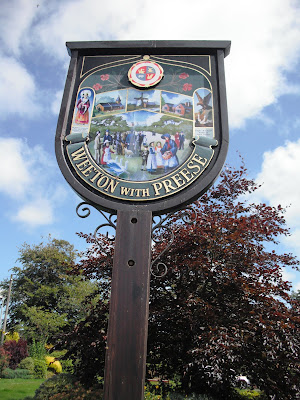 Not many photo's today, I wanted to get a move on. Next place was Greenhalgh across the fields, then cross the A585 to Medlar, and across the fields to Wharles. I was struggling a bit with the footpaths, some of them were difficult to find, stiles were rickety and overgrown with nettles. Farmers hadn't left a path through a crop where they should have done, so I had to go around the edge of the field and hope I could find the way through the hedge into the next field. I scrambled through this one through the bushes, not good for the bare legs. 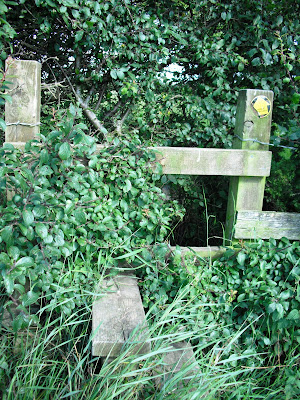 My boney shoulders were beginning to feel a little sore with the weight pulling down on them. I stuffed a couple of big socks under the straps for a bit of padding. Onward I went, past the radio masts near Inskip, to Woosdfold, Lewth, Black Pole, Hollowforth, across the river and over the railway line to get on the A6 at Barton. It was just after 5pm at this time so I thought I had better start looking for a bed. There was a hotel marked on the map, when I saw it I thought 'no chance', a big posh four star job, I went in anyway just for the laugh. I really needed to get this rucksack off my back, and my feet were feeling a bit sore.
The very nice lady on the reception said a room was £69, I nearly choked, no I didn't really, it was what I expected. I explained that I was really skint, and was a pensioner, this didn't cut much ice, but she said the cheapest she could do it for was £59. I said it was still too much, I was tempted though. Then the nice lady made a couple of phone calls, and found me a bed for £45, but I had to walk another mile up the A6 to Bilsborrow. So here I am, it's a lovely room. 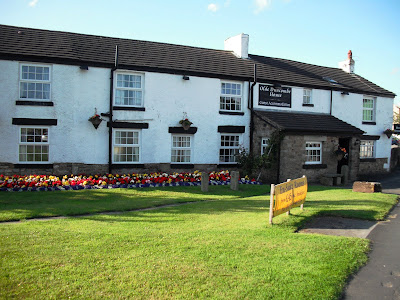 Luckily there is a shop nearby so I was able to skimp on my evening meal, I had a cheese and onion pasty for £1.69. A bit of a rip off I know, but I wasn't going to pay £2.60 for a sandwich. I passed on the drinks because there is tea and coffee in the room, I had that. So, after a lovely shower and watching the tele, and pricking two blisters, I am now going to dive into this fab bed. I have ordered breakfast for 8am. Today I have done about 18 miles, I need to do the same tomorrow. I think I'm going to have to use more than socks as shoulder padding tomorrow, probably a teashirt under each strap. Don't care how daft I look, ha ha. Goodnight. 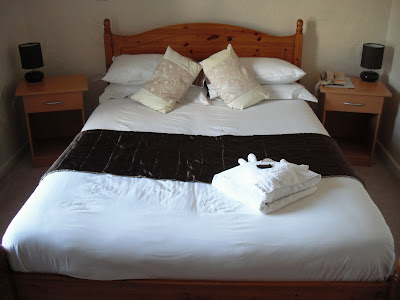