It was the giblets that did it :o)

There's no doubt about it, I will have plenty of reading matter in my later years when I am tucked away in my little en suite bedroom in some stately care home in the country. I have a pile of diaries dating back to 1963, that should keep me going for a while. By then my memory will be failing rapidly and when I read them I will be wondering who the heck is this person, ha ha. 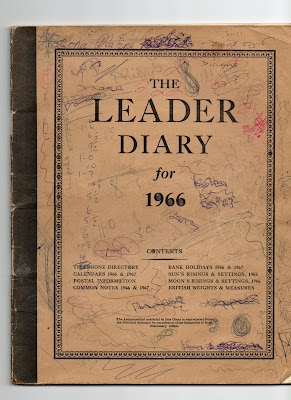 They are a constant source of amusement for me when I browse through them. Take this one from 1966, it makes me chuckle. For a good part of this year I worked in the sausage department at Roberts and Birch, a meat factory. I think it was about this time when I seriously started thinking about giving up meat, I just couldn't stomach it, especially on a Sunday night when they brought the live pigs in and slaughtered them. We lived close by and the sound of the squeeling porkers as they were being unloaded was horrible.

The 16th of May was my 17th birthday. This is the entry.
Had 10/- from Dunstall. 5/- and a box of chocs from Bob, 5/- from mum, bottle of scent from Janet, two pairs of nylons from Anna and Steve, hairspray and maltesers from Sheila. Everyone in the sausage room sang Happy Birthday to me, I felt such a nit. I had 8 cards, put 15/- in the bank, and sent off for a Stork lipstick.

I bet you are wondering what a Stork lipstick was. There were vouchers to collect from the Stork margarine wrappers, send them off and get a free lipstick. So you see my penny pinching started when I was 17. I was also carefull with my spending, putting a little away for big purchases, rather than getting credit.

I worked on a sausage packing conveyor belt on piece work, the more I packed the more I got paid. Entry for Monday 23rd. Was on bonus till 4.30. Did 634. Sheila didn't like it because I did more than her. I must beat Sheila all this week.

Competitive little beggar wasn't I? Every day I wrote down how many packs of sausages I had done, and how much I earnt. On Friday 10th I got £6-4-7 wages, that's 6 pounds, 4 shillings, and 7 pennies, in old money, ha ha. Included in that was £1-7sh bonus. That looks like a pathetic wage, but it was considered quite good to work in a factory when you could earn more by working faster.

I was a factory girl. I used to go to work in the morning with rollers in my hair because I was going out that night. Imagine spending all day with your hair wound tightly round prickly plastic rollers. We had to wear white nylon shower type caps, very fetching I think not, at least we all looked as daft as each other. I note that on the 15th of June I went to work wearing false eyelashes, well at least I made an effort ha ha.

So what did I do at the weekends? Saturday 9th July. Went in town this afternoon with mum. Rag Parade was on. Saw Ted Moult and Chris Barber and his Jazzmen. I bought myself a red suspender belt, pair of patterned nylons, pot of glue, 3d notebook, (that's 3pennies) and 2 films for my camera. Went to the Station and bought my ticket for Blackpool £2-8sh. Still got £3 left. So I was keeping track of my spending, even writing it down in my diary. Some things never change.

My sausage making job came to a halt in October. Entry for the 19th. I got sent in the cookhouse this morning. The giblets made me feel sick. I ran out crying. Had to go and see Atkins in his office, he said I was on the redundant list, I had to settle down on a job or I would be out. 20th October. Jean came out of the cookhouse this morning crying. Atkins had us both in his office and gave us a weeks notice. We went back to work till 9am then walked out and went to Wesleys. Got a job on sewing machines. Went back to work at 2pm and got suspended till monday because we never asked to leave the premises.

We could do that then, walk out of one job and into another. I did it frequently, moved from job to job, but that was the only time I ever got the sack. It was the giblets that did it, ha ha.

It was at this time that I discovered Blackpool. My friend and her family had moved there and I went to visit for a holiday. That was the start of my journey towards independance. It was also the time when I discovered lads, and boy was I lad mad. I wasn't very nice to them either. Jeans boyfriend fixed me up with a blind date, he was called Phil. On the 22nd of November I had been going out with him for four weeks. The entry says, Went to his house tonight, was in front room. I have got two love bites on my neck. He told me he loves me. We were lying on the sofa a bit. I love Phil. I was little miss innocence, my mum told me to keep my hand on my halfpenny and I did, ha ha.

Then it seems we had a bit of a tiff, because on the 27th I wrote, Went to the flicks this afternoon with Phil. I chucked him. That was a bit harsh, for what I can make out, I went off him because he couldn't dance very well. Then it was all change again, the entry for the 29th, Phil came tonight, I made it up with him. We went a walk across the Trent Bridge. I don't love him, I just like him, and he is someone to go out with. He's ok I suppose. Anyway he got his own back, he finished with me on the 3rd of December. It wasn't long though before I was off fancying someone else. I was a terrible flirt. This is one trait that has changed over the years though, now I can't be bothered, ha ha.

I bought a bike in the July, it was a blue one and cost £8 from the second hand shop, I noted that it was fabulous. This gave me a lot more freedom, I went all over the place on it for miles. There are also several mentions of colouring my hair, I remember one incident very well when it went wrong, it ended up blue. I was a laughing stock, it's a wonder my hair didn't fall out with all the peroxide on it.

Little Miss Independant also washed all her own clothes. On Sunday the 24th of July, I washed stacks of clothes and they all dried. I didn't trust my mum to do it properly. I also painted the inside of my bedroom door, my desk top, the chair seat, and a tea chest. Yes, the tea chest was a makeshift table with a piece of hardboard on the top of it. I also wallpapered my bedroom walls with newspaper because we couldn't afford proper wallpaper. I was proud of my whacky room.

Funny that a lot of what I did at seventeen, has moulded me into the person I am today. I am glad I can look back and laugh at myself, I was a bit of a crazy dude.
Posted by Meanqueen at 13:07