Up at the crack of dawn

Hands up, who was up and out of bed at 5am this morning? Yep me, yours truly. As head of fundraising for our cat rescue it is my job to drag myself from my pit at some ungodly hour, and head off down to the football ground with a car load of swag, set up stall and flog as much as I can to make funds for the kitties.

This morning I was not alone, Janet also volunteered to come along and help out. Between the two of us we managed to raise £60, which we are pleased about. 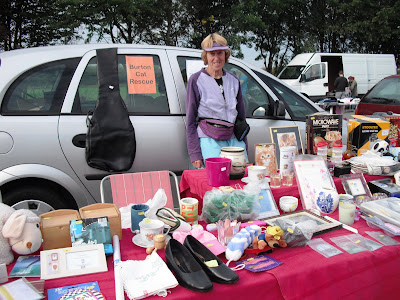 It was still dark when we pulled in at 6.15am, our pitch was dead centre on the car park, a good place to be. I don't like being on the end of a row because you often miss out on customers who can't be bothered to walk to the outer edges. We were amazed at how many buyers were cruising the stalls, ferreting around, searching for the first bargains. We got our tables out, good job I had the head torch on, and covered them with cloths, and put out a few large items. Best not to put the small and interesting items out till it actually gets light. I hate it when people act like scavanging vultures before you are ready.

We had priced most things up beforehand, with just a few more stickers to go on as we pulled single items out of the car. It's best to set your prices first, then everyone knows how much you want without having to ask. If things aren't priced they either turn away because they are too shy to ask, or you have to think quickly when they ask and you can make mistakes, too high, or too low.

I noticed how a lot of foreign people with very limited English asked for a cheaper price than the sticker price. This annoys me, because we were already cheap, and as I pointed out to them, we are a charity. I know it's fun to barter but they were just taking the Micky.

One kind gentleman actually gave us a bag of shoes to sell. They were marked up at 50p a pair so he obviously had been trying to sell them but hadn't had much luck. We put a couple of pairs out, and within minutes sold a pair.

I had a look round myself and resisted buying anything, I was there to sell. Our table looked really appealing compared to the rest of them who seemed to chuck a load of dirty tat on a table or a sheet on the gound and hope people rummaged through it. I think a good presentation helps to sell more, and if you have taken the time and trouble to wash, scrub, and polish things, they will look like a better class of tat, ha ha.

It was all over by 12 o clock as we packed away, taking home a bag of money and a lot less stuff than we had brought. We won't be doing this every week, only now and again when the weather is forecast to be nice, and when we have collected some more stuff to sell. I am now off to unpack the car. Toodle pip.
Posted by Meanqueen at 13:21