I owe it to myself

I sometimes wonder which bits of me are going to pack up first as I head towards old age. I've been lucky up to now with my health, maybe because I've spent a lot of years working a manual job mostly outdoors. Or maybe it's all down to my genes, I don't know. I think there's a lot of truth in the saying use it or lose it, and I have certainly been using my body more than my brains, so maybe my body will go on and on, and I will eventually lose my marbles. Maybe, perhaps, I don't know.
At this moment in time, like a lot people of retirement age in their sixties, I am trying to keep busy, mentally and physically. I owe it to myself to at least try and stay as physically active and as mentally alert as I can. No one's going to do it for me, it's down to purely my own efforts to make the most of what I have left, and to make it last as long as I can.
No one can escape the fact that we are all destined for the graveyard one way or another, OMG, I'll try not to sound morbid and depressing on this Saturday morning. But the truth is that some will get to the finishing line before they either want to or need to. Who knows what is going to strike us down, there are so many variables which influence how long we have on this earth.
I do believe however that there are some things which we can do to help ourselves. Whether we chose to take note of all the information on healthy living which is out there, is another matter. Oh I know some folks will say we don't know what to believe as the scientists come up with one new theory after another. More experiments, more tests, this works, that doesn't, it can be very confusing. I like to read up all I can, then make my own choices on what seems obvious to me. Like not smoking, eat plenty of veg and fruit, very little alcohol, get up and move about a lot, as much excercise as I like, and activities to stimulate my brain. Informed choices is what I think they call it.
So where do I get my information from? The internet and the library. Every so often I will pick a book up which I think might be usefull to me in my quest to stay healthy. A lot of the information inside I will already know about, but it's good to keep reminding myself of what is good and what is bad for my body.
Let's get to the book. 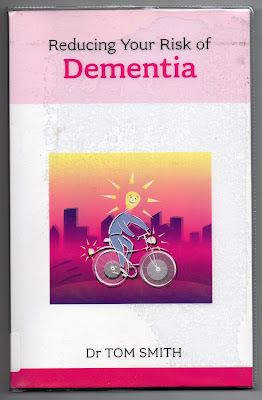 Doctor Smith has been writing since 1977 after spending time as a general practitioner, and working in medical science. He writes the Doctor columns in The Guardian. http://www.guardian.co.uk/lifeandstyle/series/doctordoctor

I found this book very informative, as well as pointing out the obvious downfalls of choosing an unhealthy lifestyle, it goes that bit further with explaining exactly why you shouldn't consume certain foods and drinks, detailing what it will do to your body, and in the case of this book, the mind.

People generally think of smoking as bad for the lungs, but it is also very bad for the whole of your body, including the brain. It can accelerate the process of dementia. I'm not singling out smokers here, in fact just about every unhealthy habit you can think of will affect the brain in some way. But, I quote from Doctor Smith, "Smoking is a stupid, suicidal habit for anyone. How exactly does it harm you? It first poisons the red blood cells so that they cannot pick up and distribute much needed oxygen to the organs and tissues, including the heart muscle". I don't think I'll go on, read the book if you want to know the rest, but it makes for pretty grim reading if you are a smoker.

To sum up, there is some hope. Doctor Smith points out that brain cells are constantly changing, renewing, and making new and more connections with their neighbours and with similar cells further afield. Even in older ages the brain cells can recover and regroup, and there are ways which we can enhance that process. There is a lot of usefull information in this book, even if it reminds us of what we already know. A usefull reference book to return to again and again.

Enjoy your weekend. Toodle pip.
Posted by Meanqueen at 10:30