It's been a mizzly drizzly sort of day, not nice enough to go anywhere, so I have stayed in. I did think about tidying up the veg beds now that the courgettes have finished. I lifted a few leaves and was about to pull them out, when I found a frog hiding underneath them. I couldn't destroy his hidey hole, so I left them alone. I'll leave it a while.
One of the sunflower stalks got blown over in the wind and was laid on the garage roof. It wasn't severed, just bent, so I managed to nail a long piece of narrow wood in an upright position onto the garage wall, and fasten the stalk to it like a splint.
It's been a boring sort of day. Washed the pots, boring. Cleaned the windows, boring. More sewing, boring. Had a bath, boring. Load of washing, boring. Dysoned the carpets, boring. And made yet another boring stew.
I found a few radishes in the garden, probably past their best, probably tough as old boots, but if I chop them up small they might just soften up enough to make them edible. I keep finding a few more runner beans. Just when you think they have all gone, you search again just in case you missed some, and bingo, you have. Spuds, and the last courgette out of the garden. Shop bought onion, and a tin of green lentils given to me. 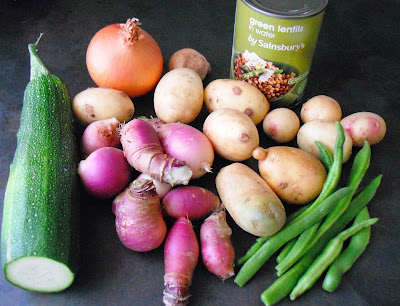 Other ingredients were Quorn pieces, frozen broad beans, and linseeds. For flavour I used curry powder, turmeric, garlic puree, and tomato ketchup. Boring but really tasty, and enough for three or four days. Will save cooking. I won't bother freezing it, just keep in the fridge in the pan, and microwave a portion when needed. 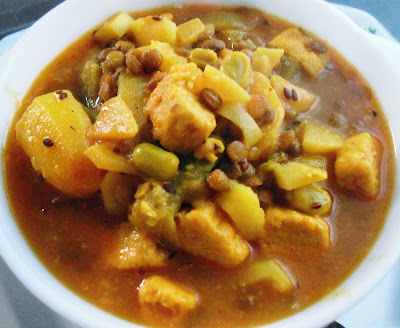 Don't worry, I won't be bored tomorrow. It's the weekend, my day off, ha ha. Hope you have a good one. Toodle pip.
Posted by Meanqueen at 20:05