Inventing a picture frame, and finding some free ones.

Hello. At last the picture is finished. After changing my mind about the frame several times, I thought of this idea, and I think it works rather well. I added an extra layer of the green mossy stuff to strengthen the edges and give it a more defined frame, I stuck it on with PVA glue. 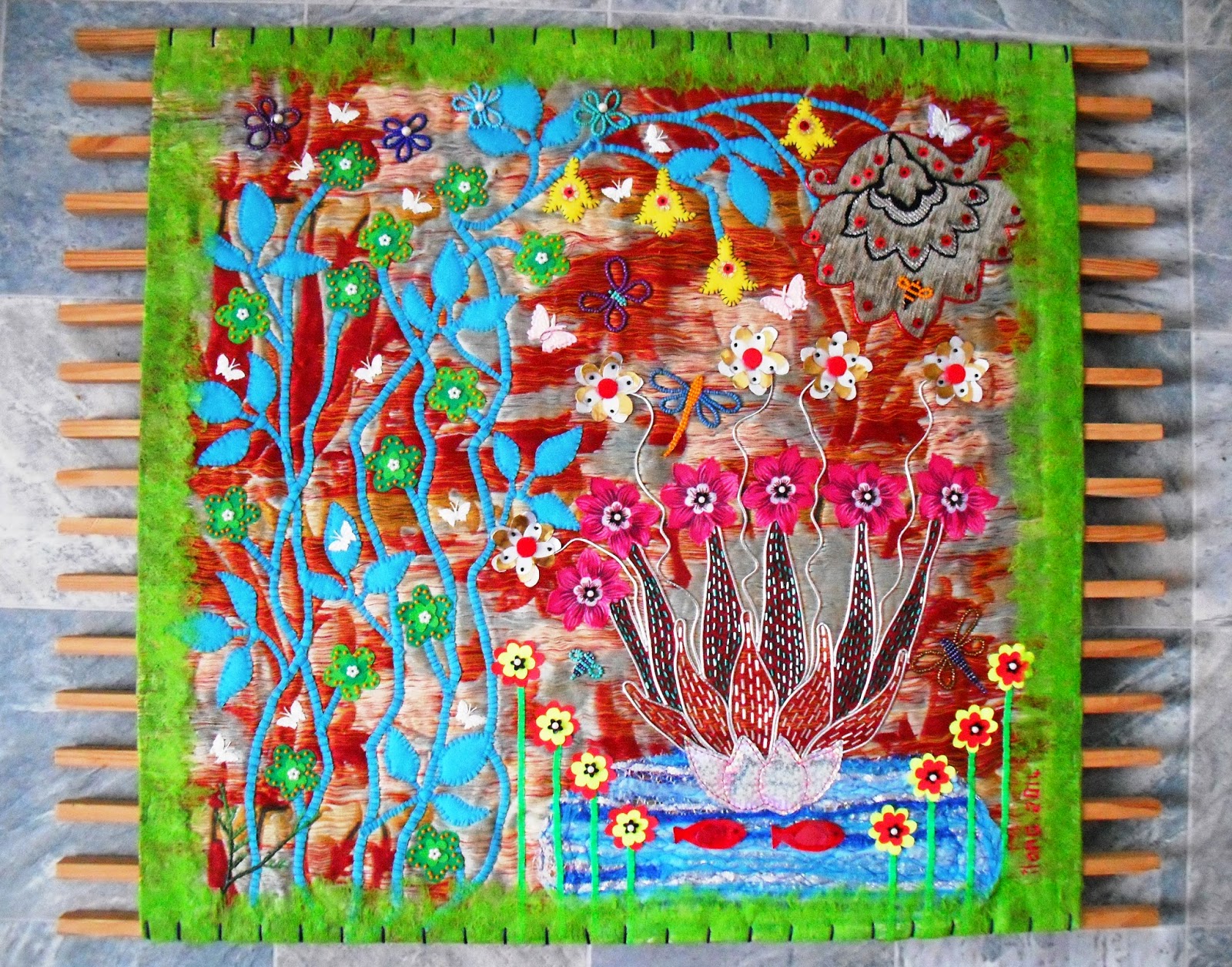 I have had this knocking around in the spare room for years. It's a self assembly shoe rack, though I never used it for it's original purpose. I bought it to add height to my market stall. Positioned at the back of the table as extra shelving to elevate the display. Perfect for this job. Lay the two pieces on a piece of hardboard. It wasn't quite big enough so I cut two of the legs to size to fill the gap in the centre. 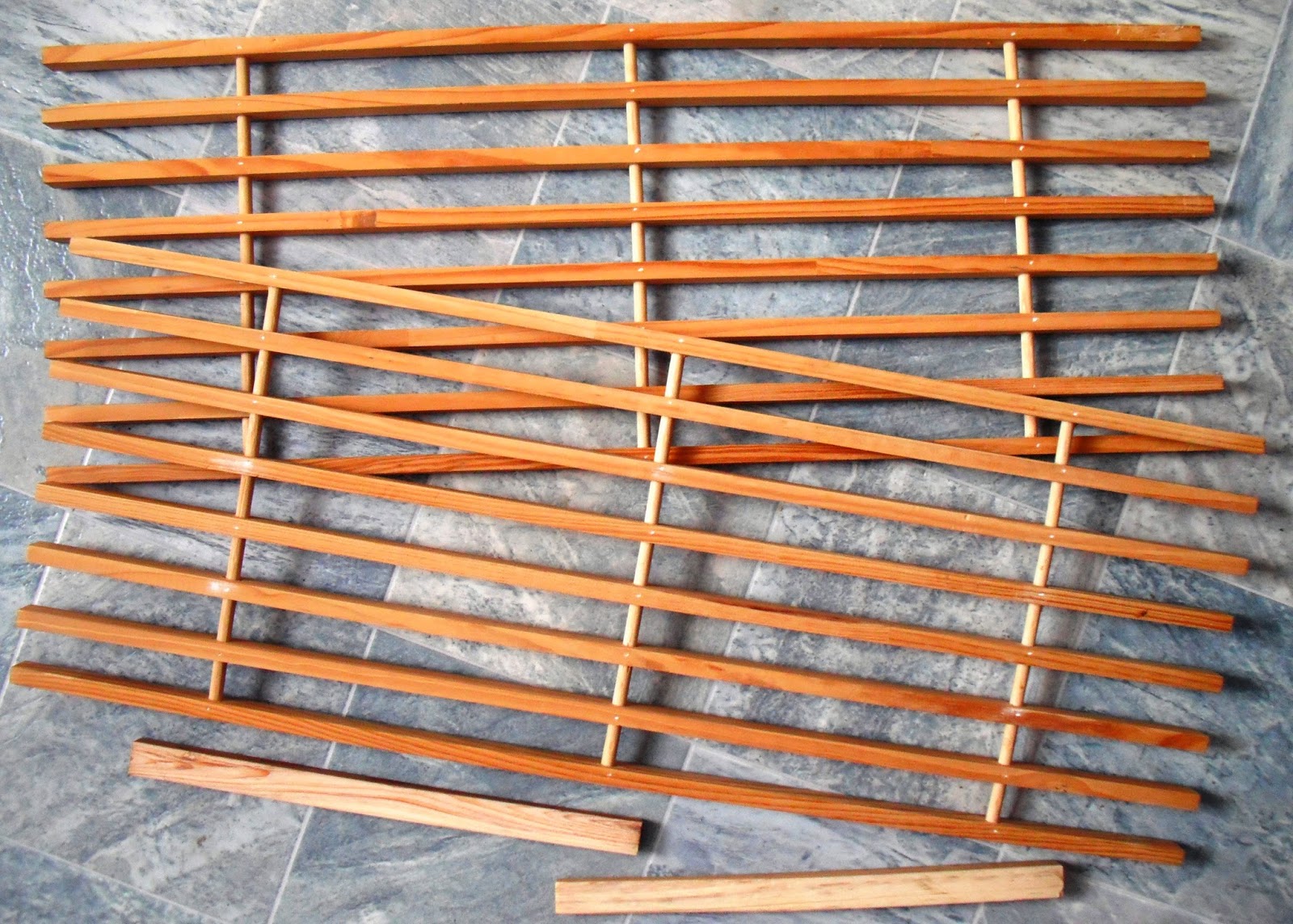 The picture sits on the top of it, secured at the top and bottom with a dark thick thread set one inch apart. Along the vertical sides I have used invisible thread. I was going to use the dark thread, but decided that the stitches up the sides would not match up with those at top and bottom. 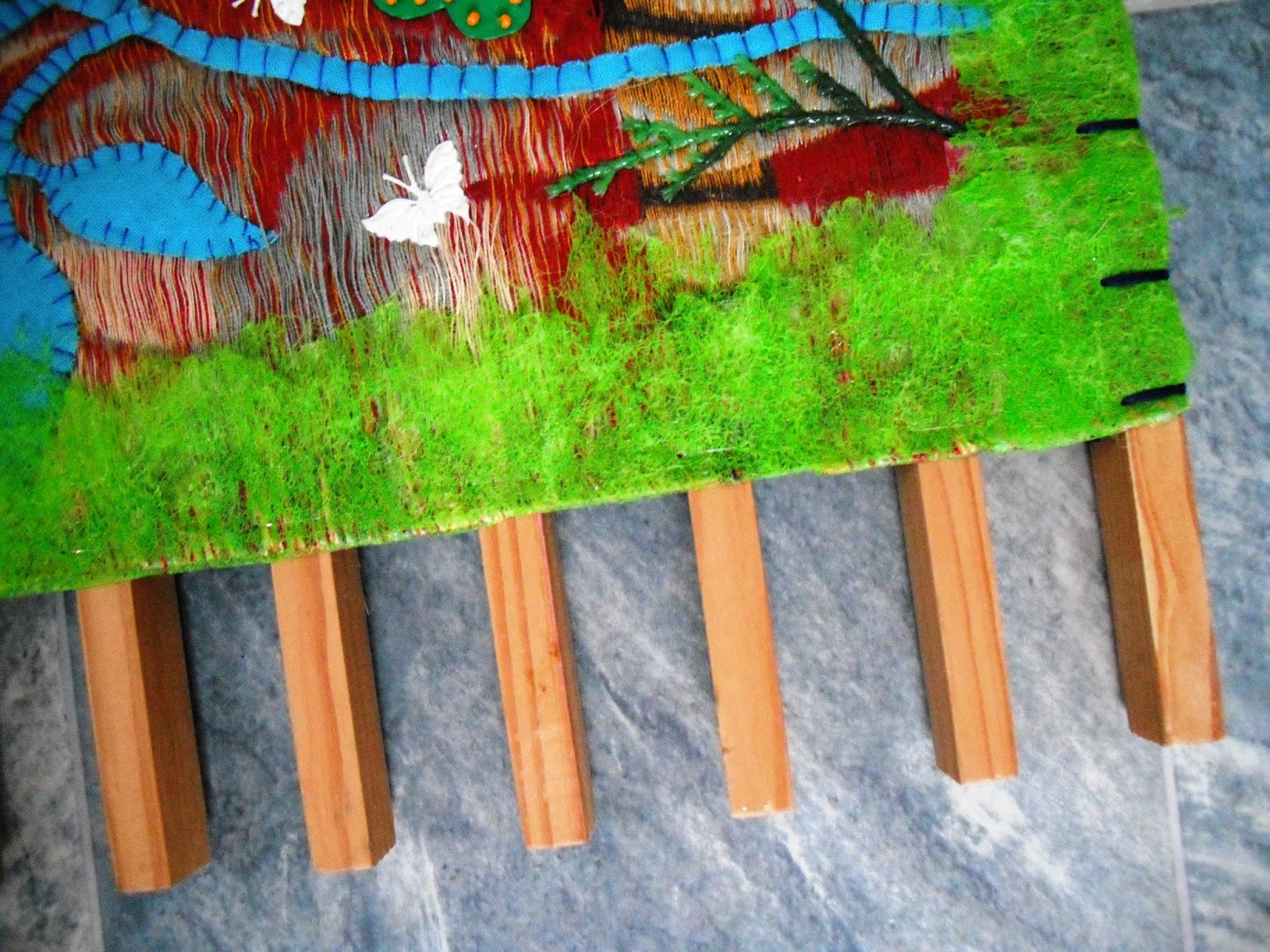 Each piece of dark thread is knotted at the back. 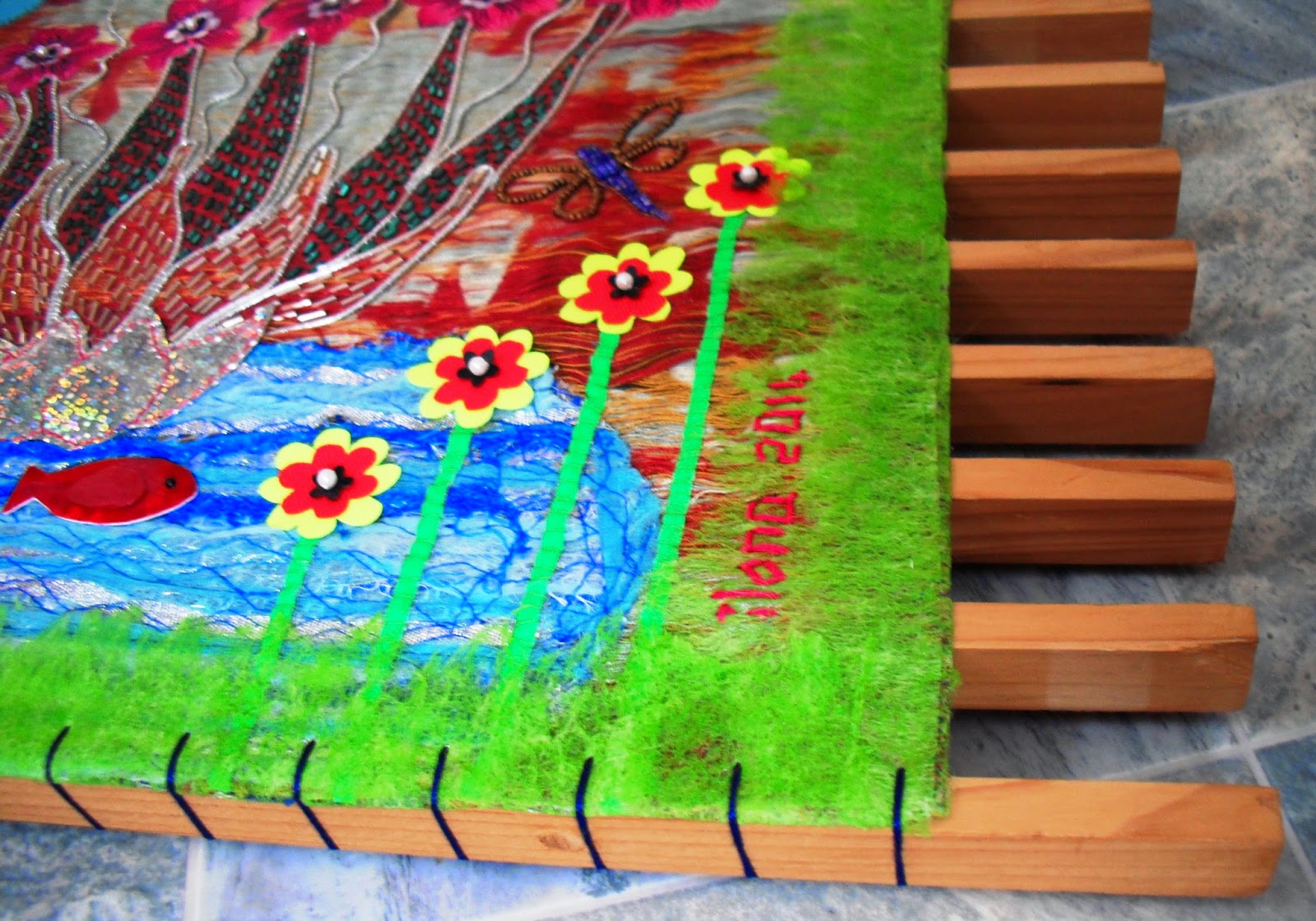 I screwed all the slats in several places to a piece of hardboard, which I trimmed to slightly smaller than the picture, so it doesn't show to the front. This makes it super strong. 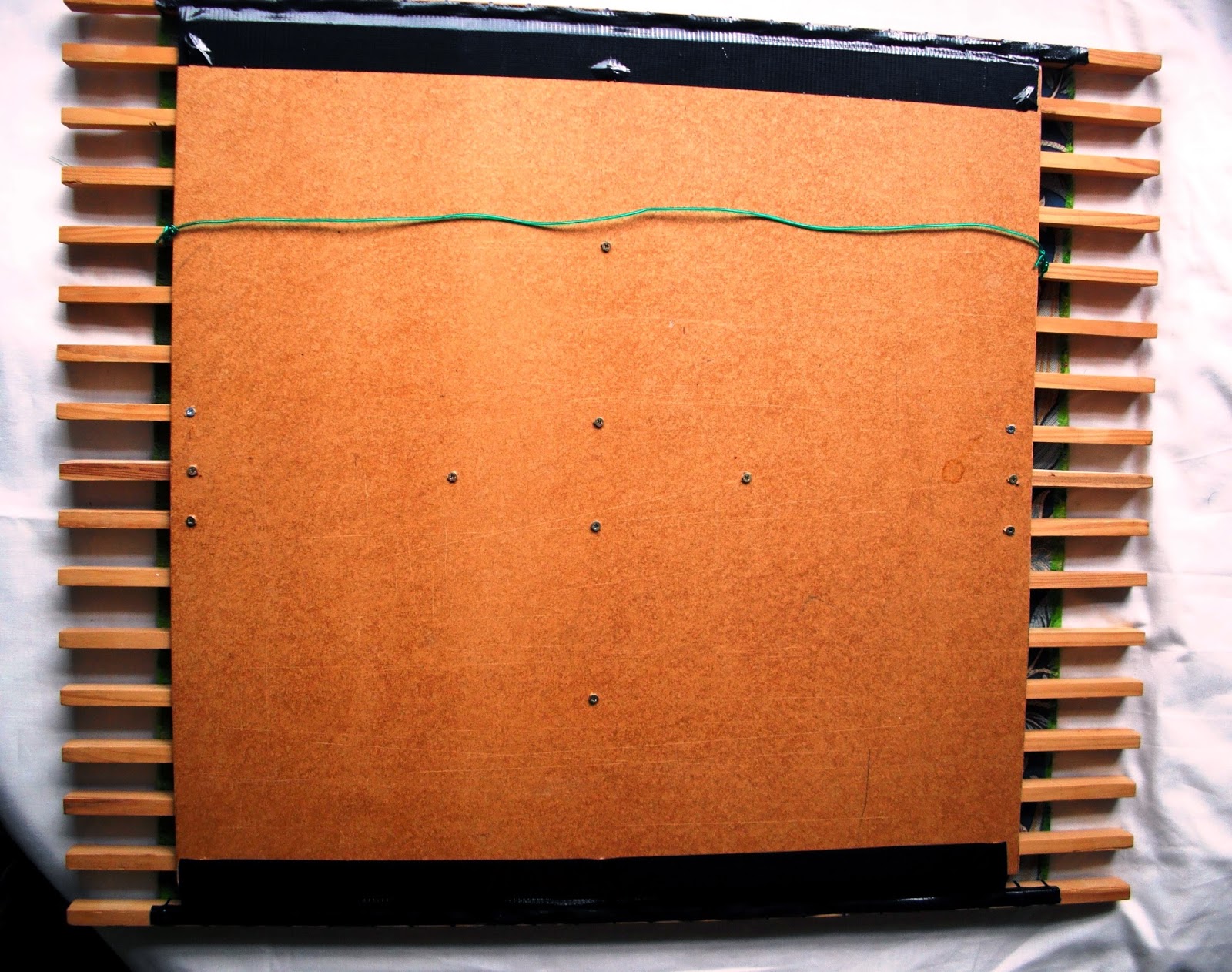 Then I covered the knots with black tape to tidy it up. A piece of wire from a broken set of Christmas tree lights to hang it. 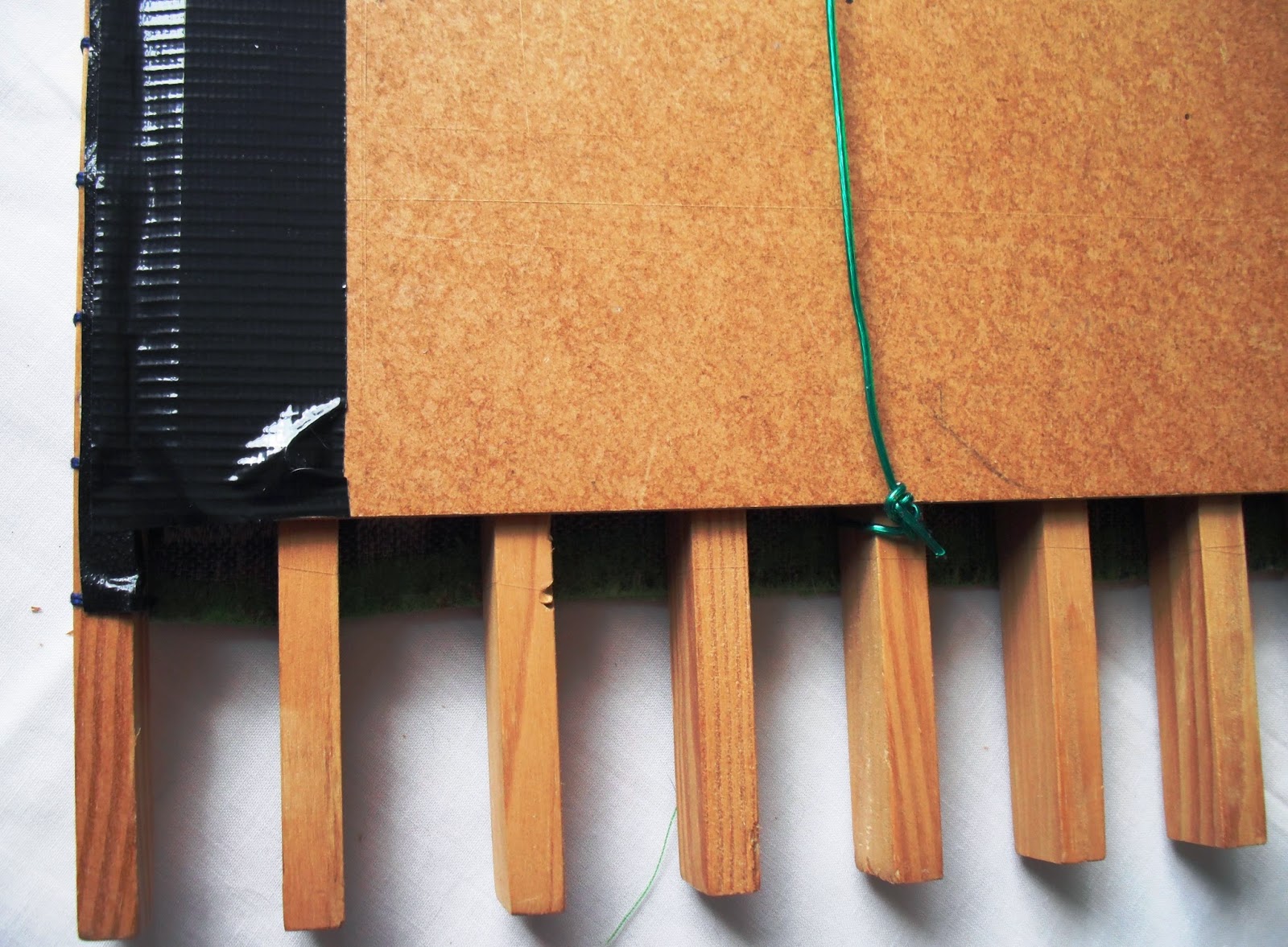 And there you have it, finished. Looks nice hanging on the wall, this type of frame is ideal for it, as it's more like a tapestry than a picture. I shall take it down and wrap it to keep it clean, in the next few days. Then try and get it shown somewhere. 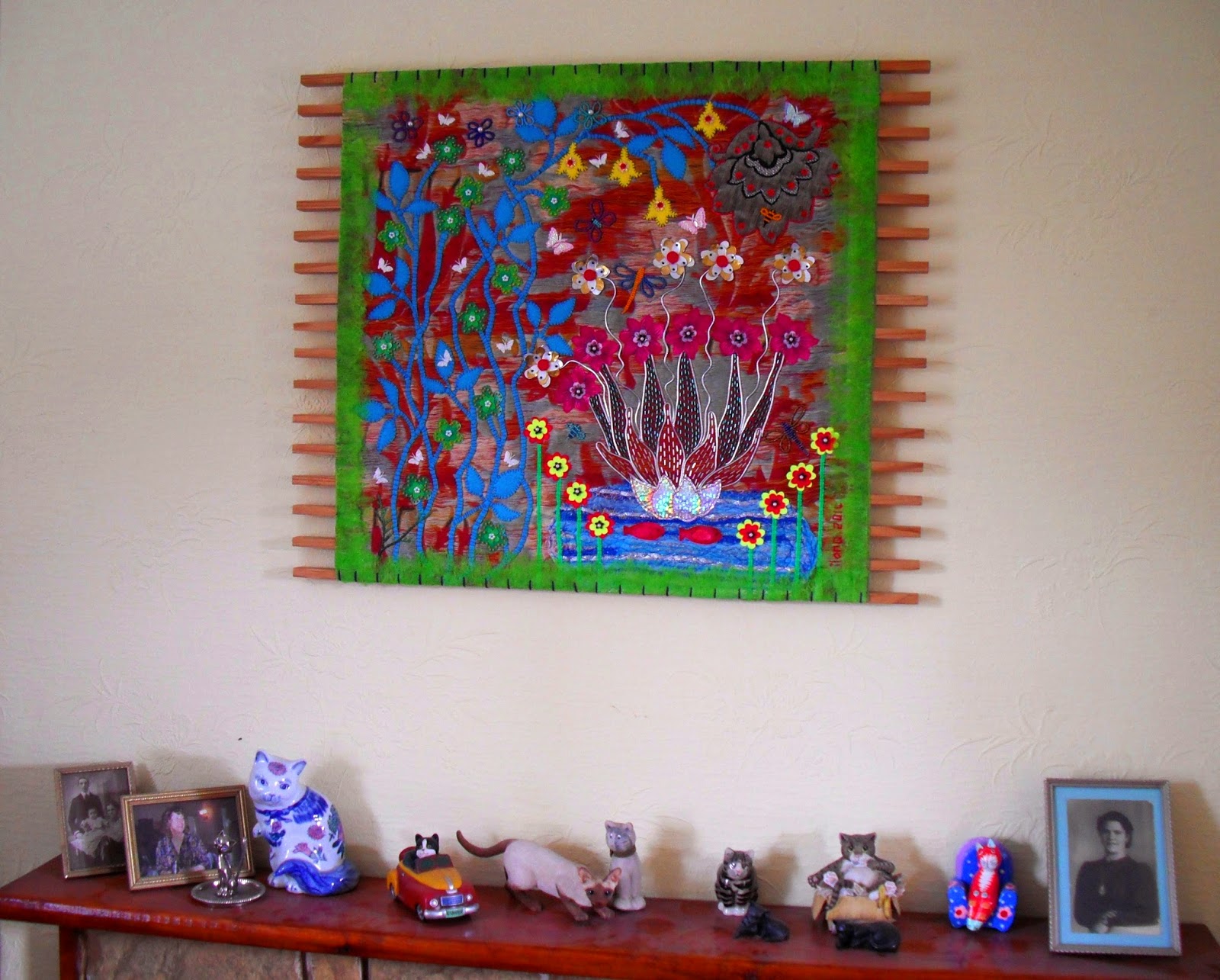 I've been skip diving again. Just down the road they have a skip on the front, looks like they are sorting their stuff out in readiness for a move. The house is for sale. I saw that they had put four picture frames on the ground outside the skip, maybe these are free to take, so I knocked on the door to ask. Yes, take what you want, says the woman. I've cleaned them up, they must have been stored in an attic for years. There are two large ornate frames, 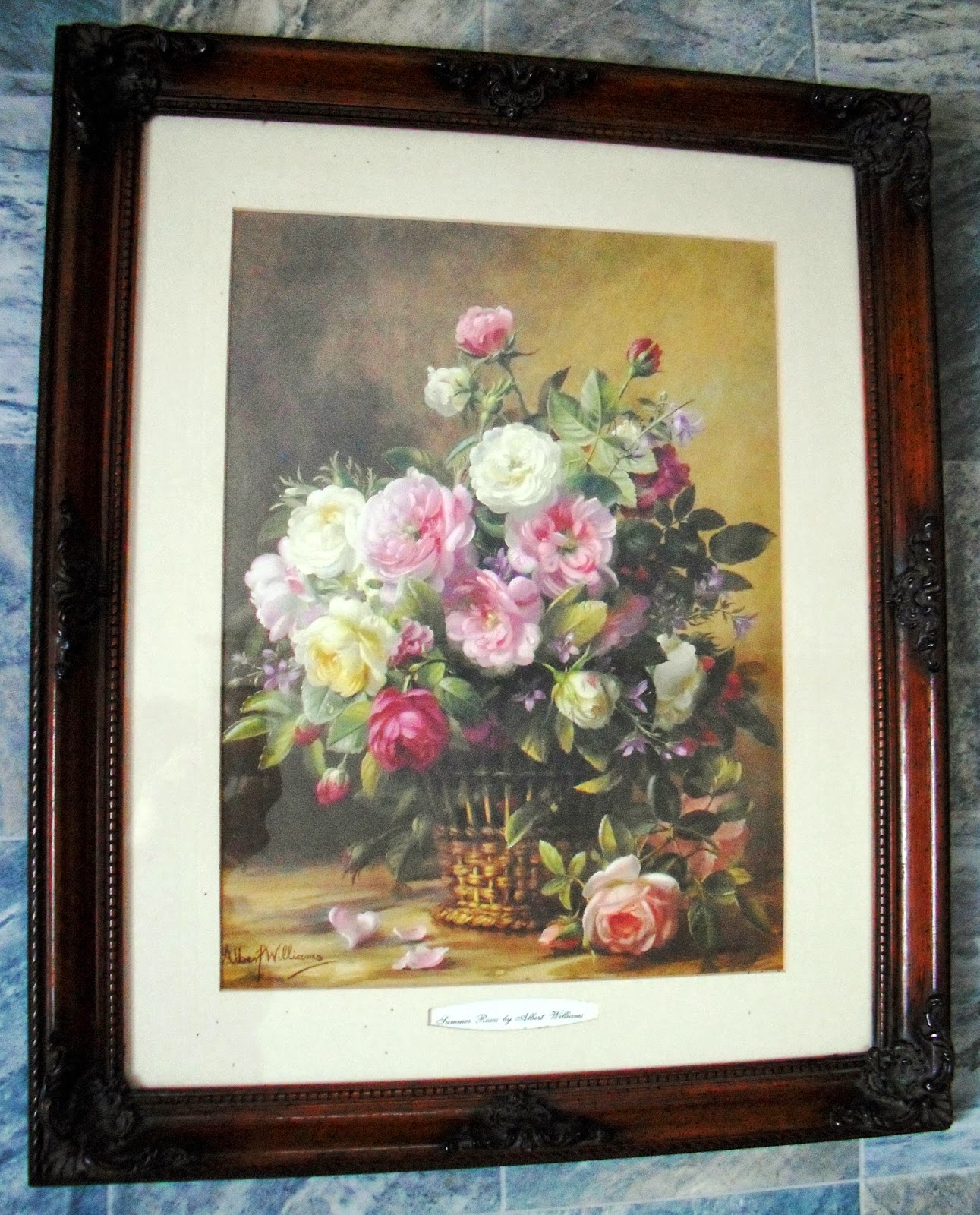 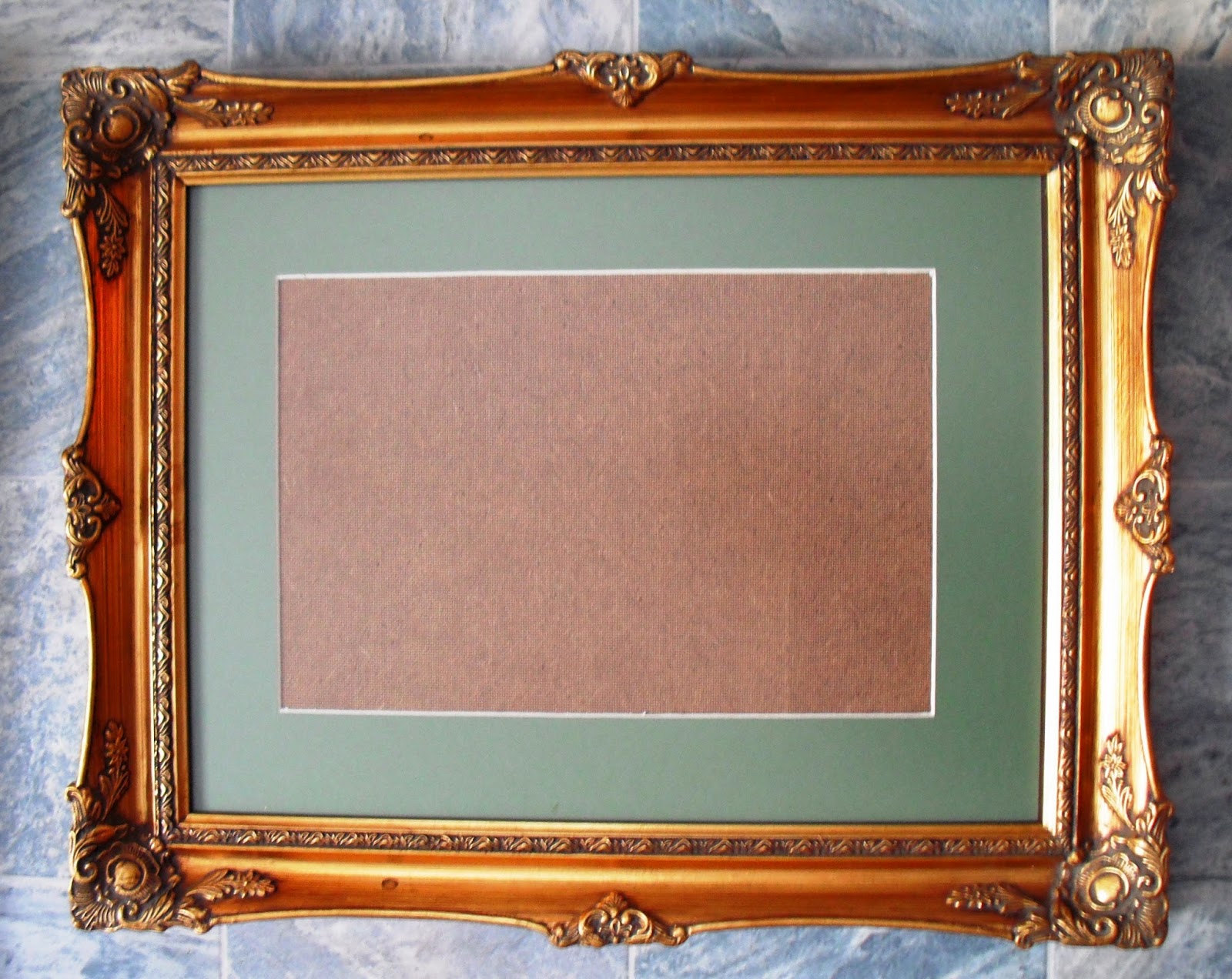 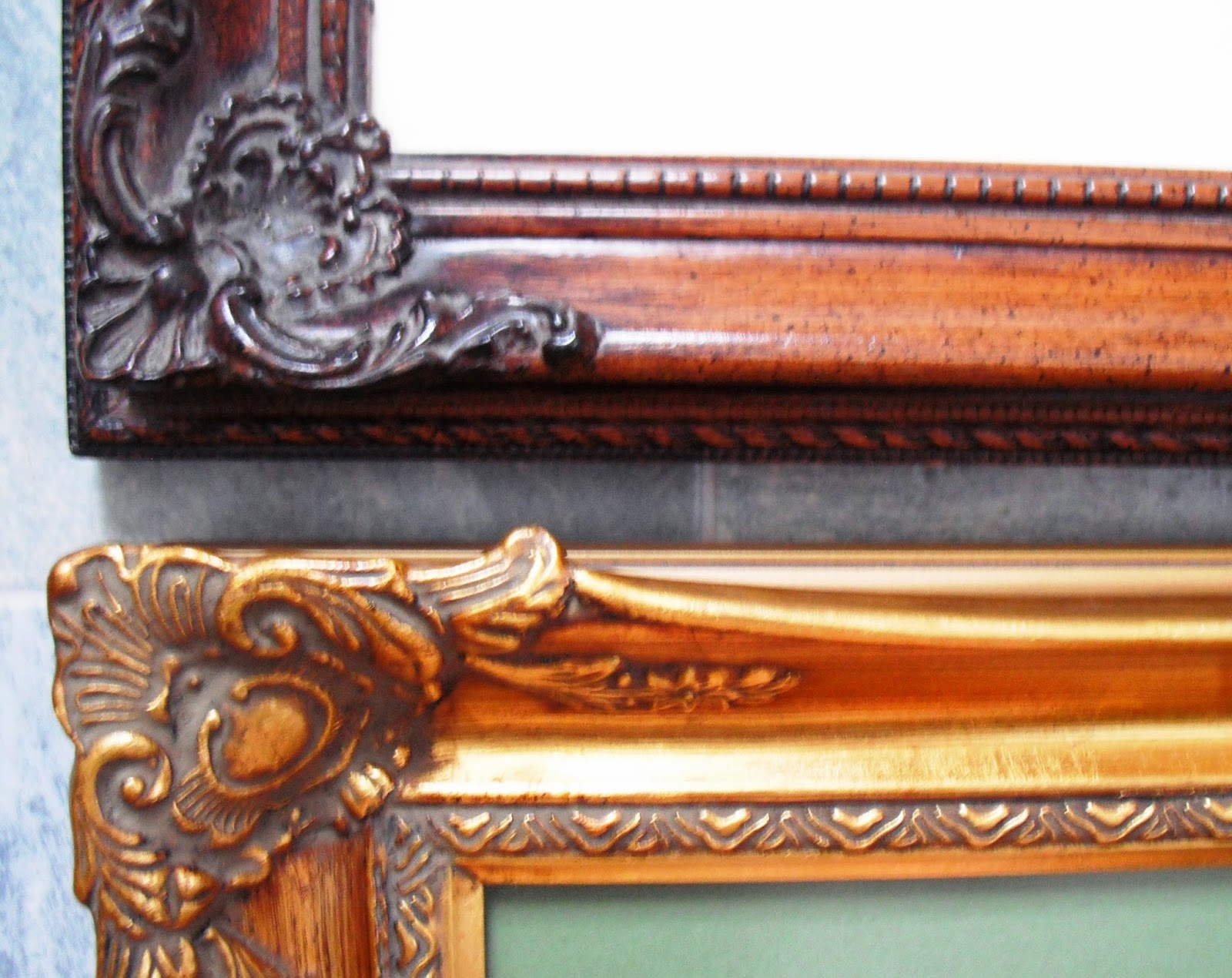 And two smaller plain ones. 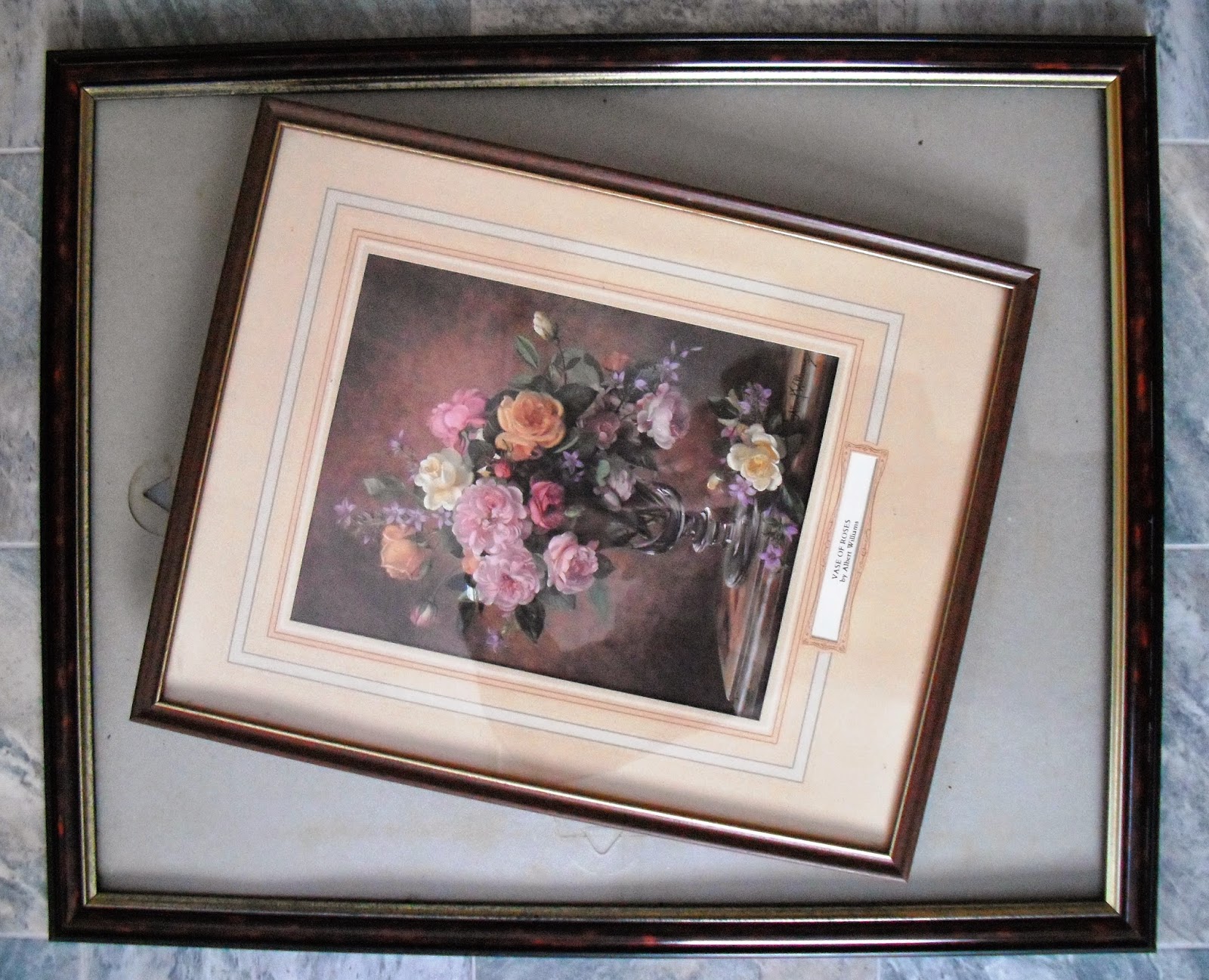 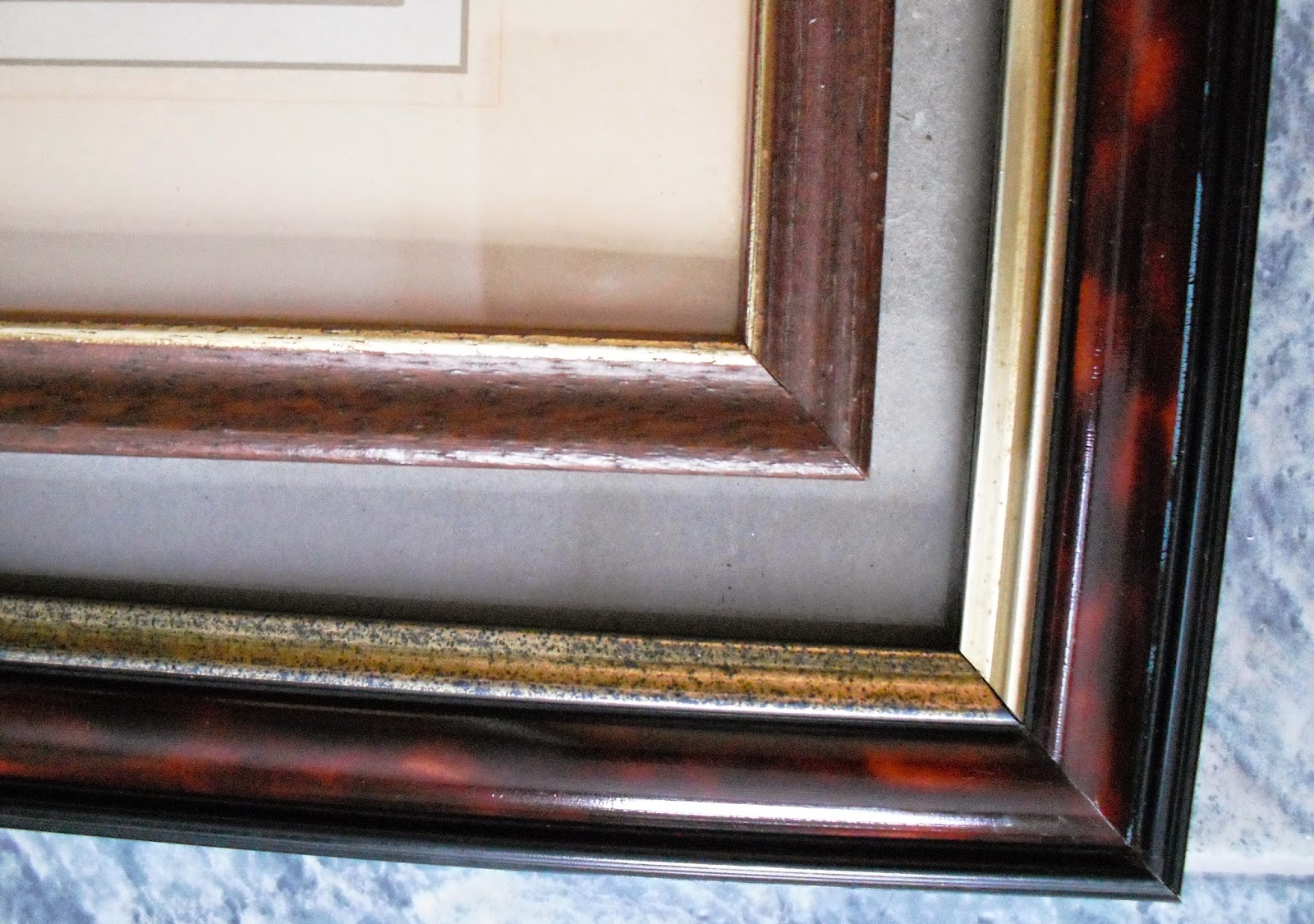 Good find, eh! Need to make some more pictures now. I will keep my eye on that skip in case anything else appears. Love free stuff, ha ha.
Toodle pip.