Mingling with the Whitby Goths

Hello. Shame the weather has gone a bit grotty, but there you go, some you win, some you lose. It was a nice day yesterday in sunny Whitby. Me and my four legged friend took an amble on up there to North Yorkshire. I parked the car on West Bank and off we went. Lovely day for a bracing walk by the sea. 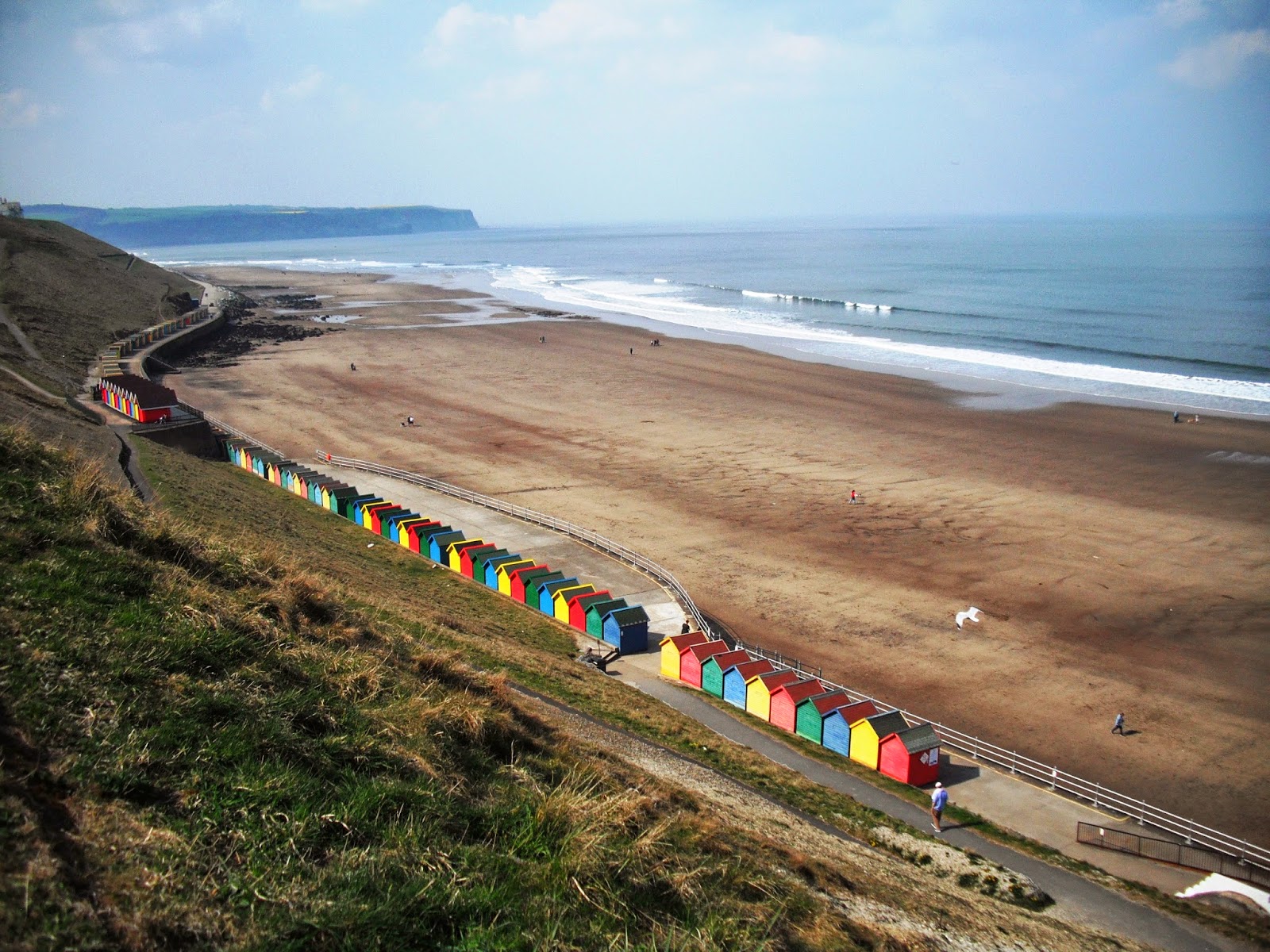 Across the bay on the other side is The Abbey, and below it the little red roof cottages. To the right of the Abbey is the Youth Hostel which I have stayed at before. 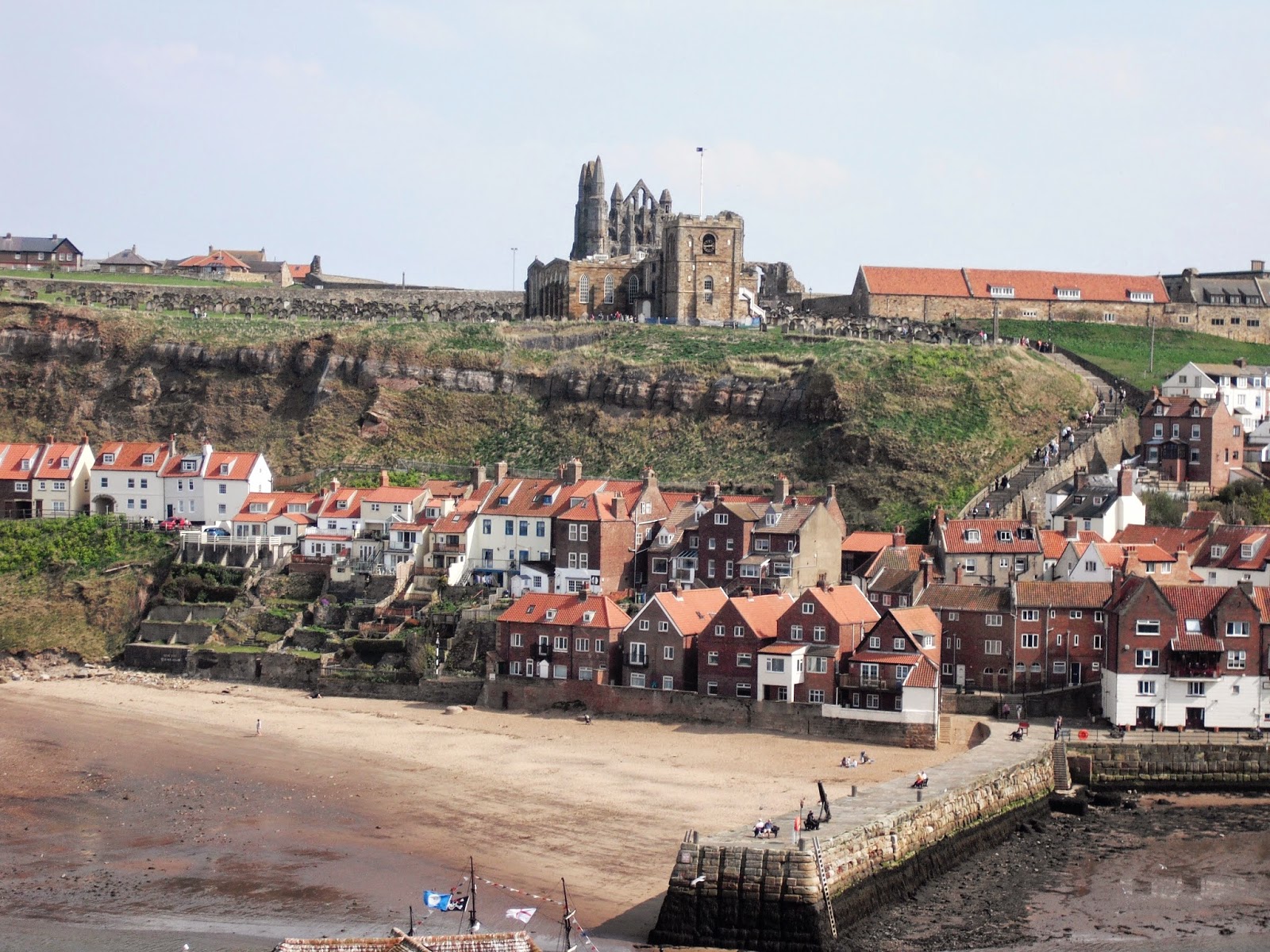 The Pier was very popular for a Friday morning stroll. There were a lot more people around on this particular weekend. 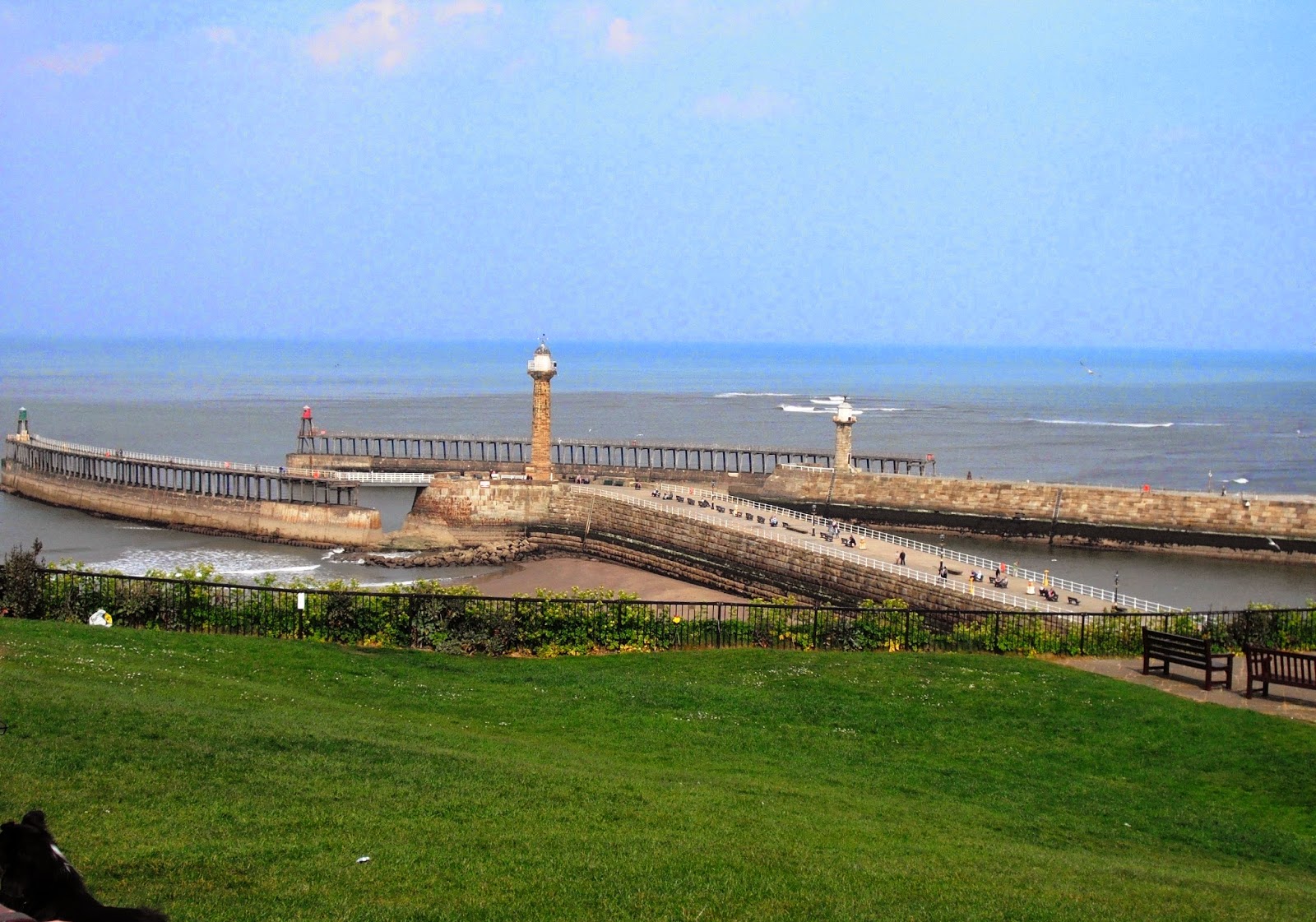 'Hey, can we go over there, I want to see that old castle?'  'No not today Rocky, there's no way I'm dragging your wheels up all those steps, and it's not a castle, it's an Abbey.' 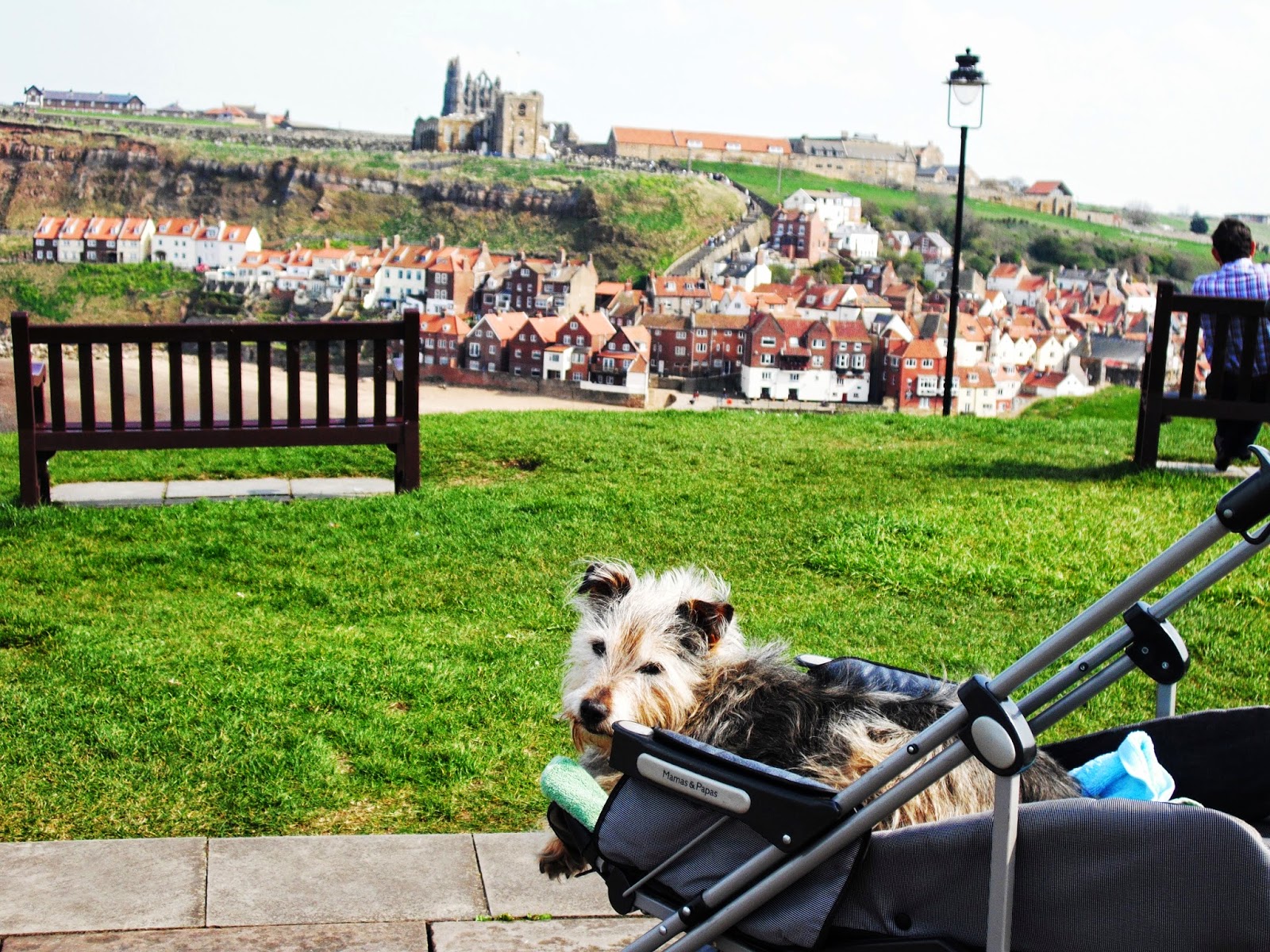 I've been meaning to come to Whitby Goth Weekend for ages, usually something else gets in the way of it, so this weekend I made an effort. There are plenty of shops selling everything Goth. If you want to look the part you need a pair of these boots. 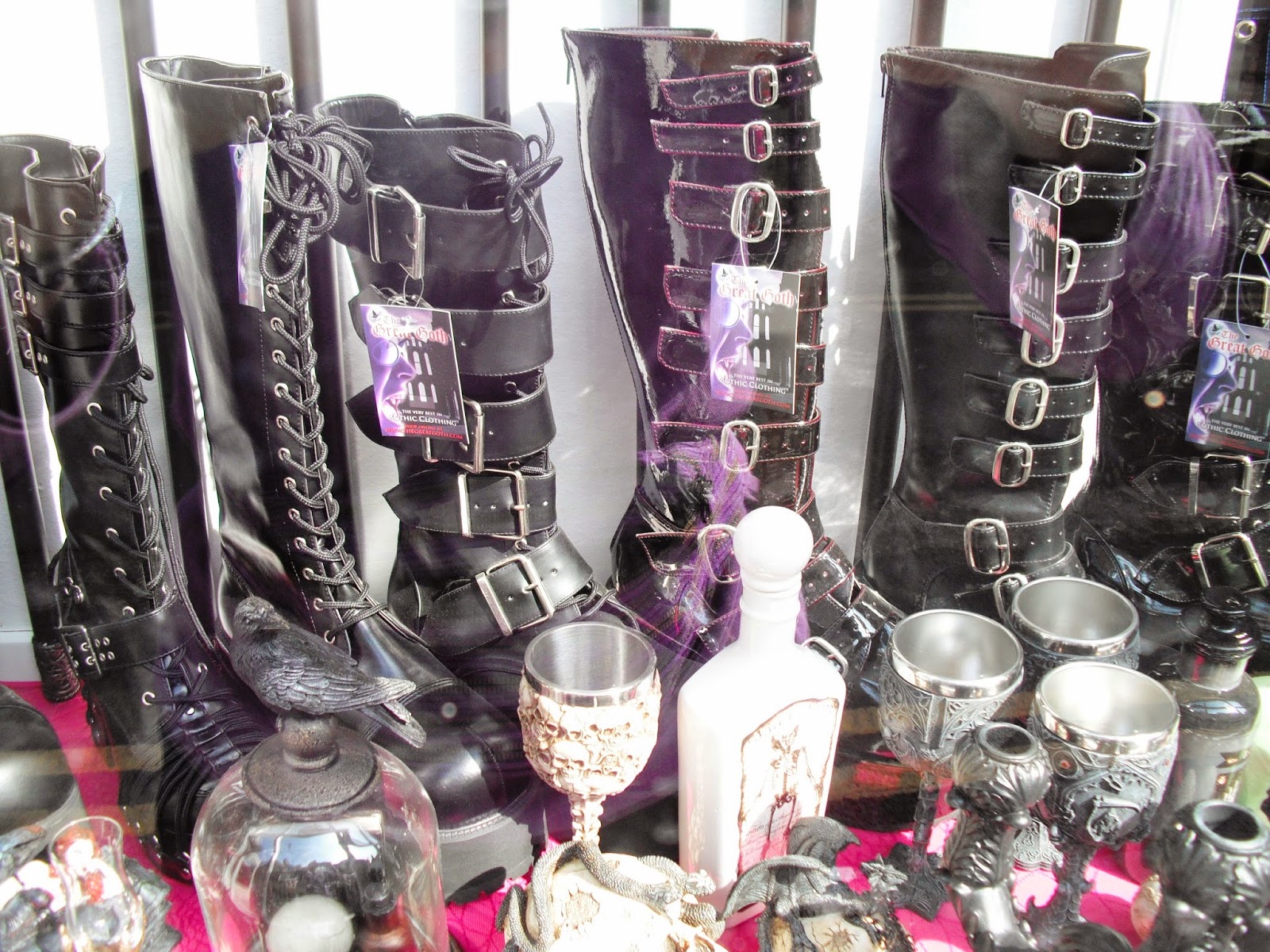 I love all the dressing up, there are some weird and wonderful costumes, some of them must have cost a fortune. So much effort has been put into perfecting their chosen look. There was a lot of posing and photograph taking going on, I joined in. Some of them were happy to chat to me and answer my questions. Everyone was enjoying the moment. 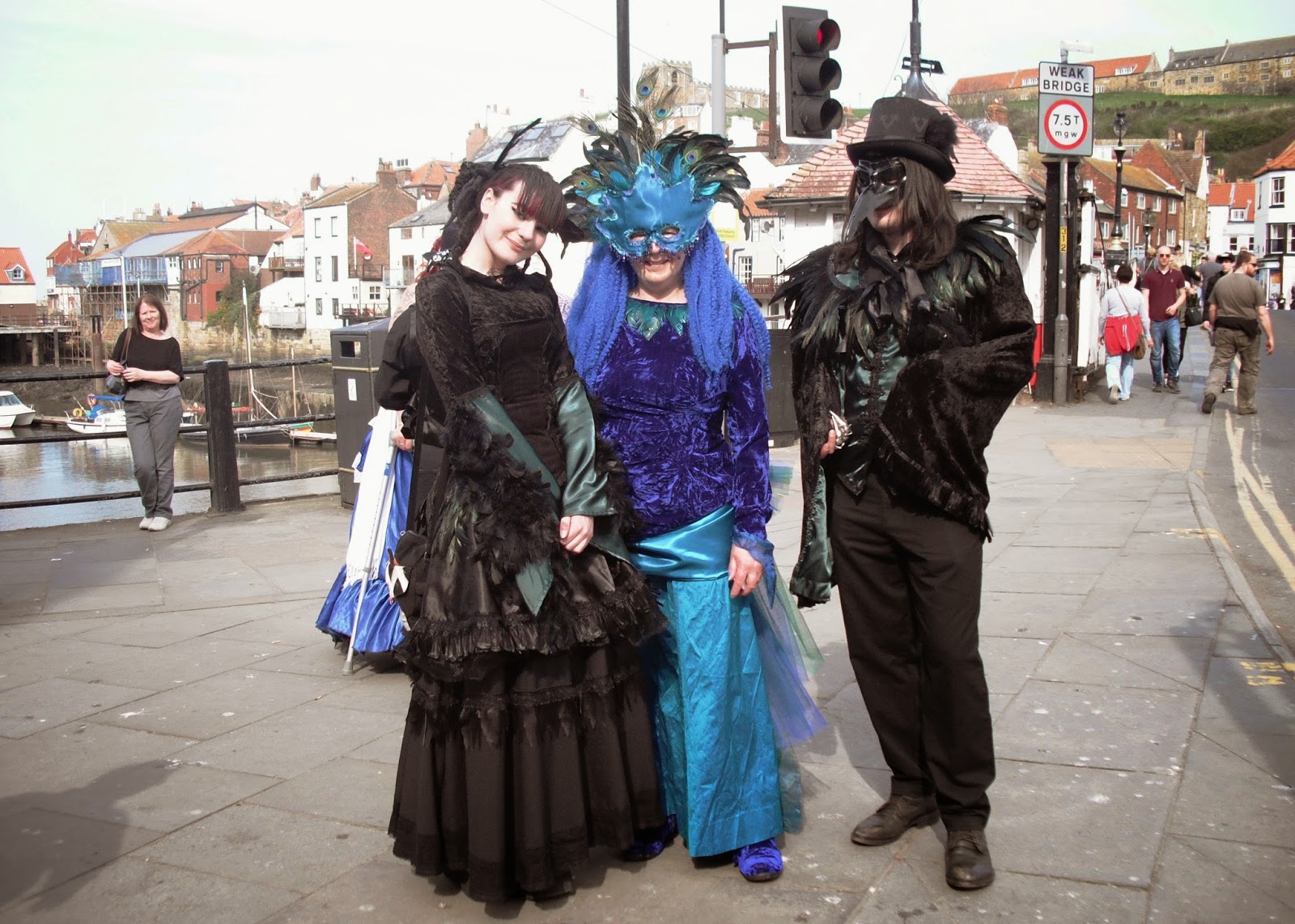 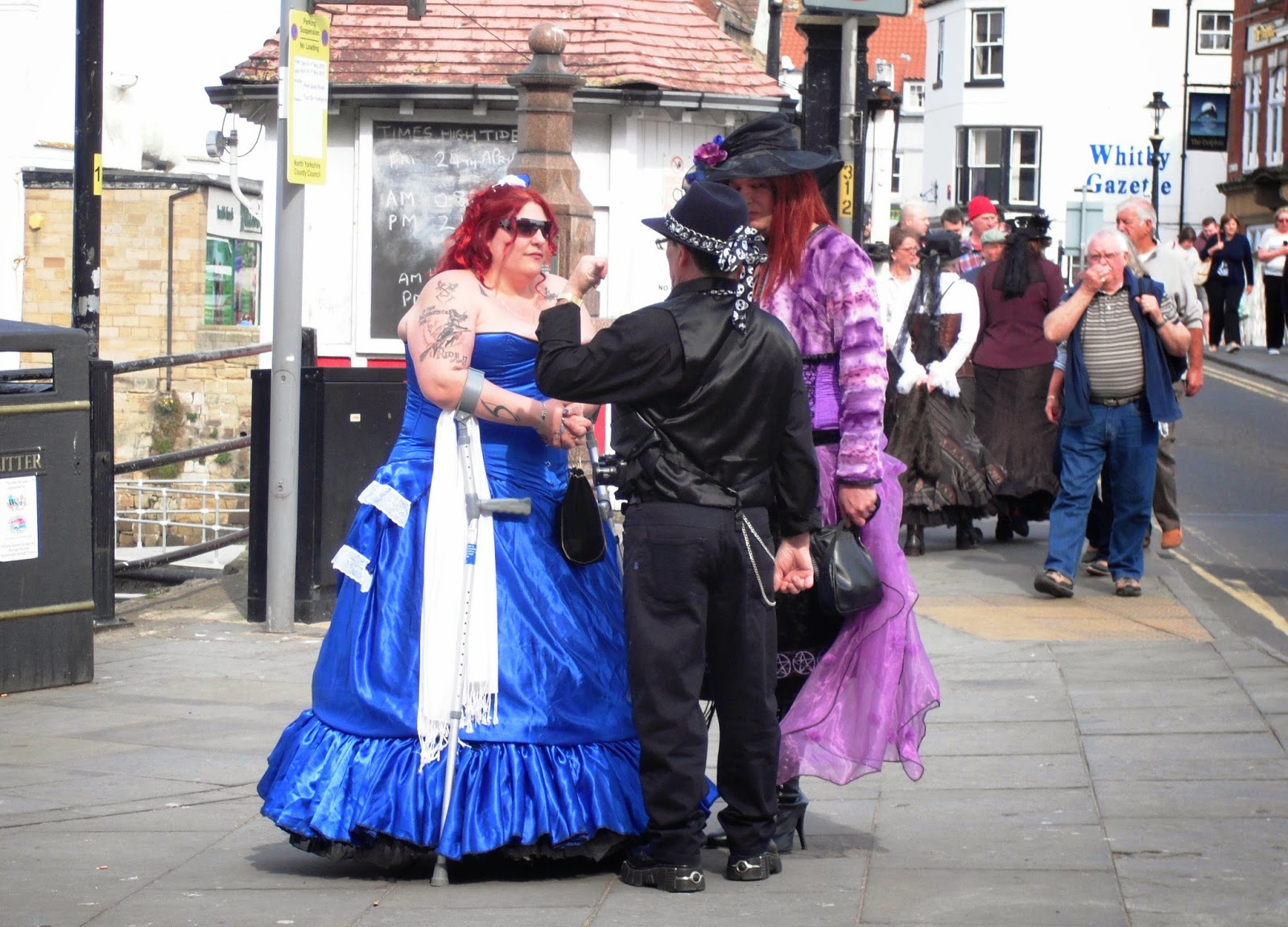 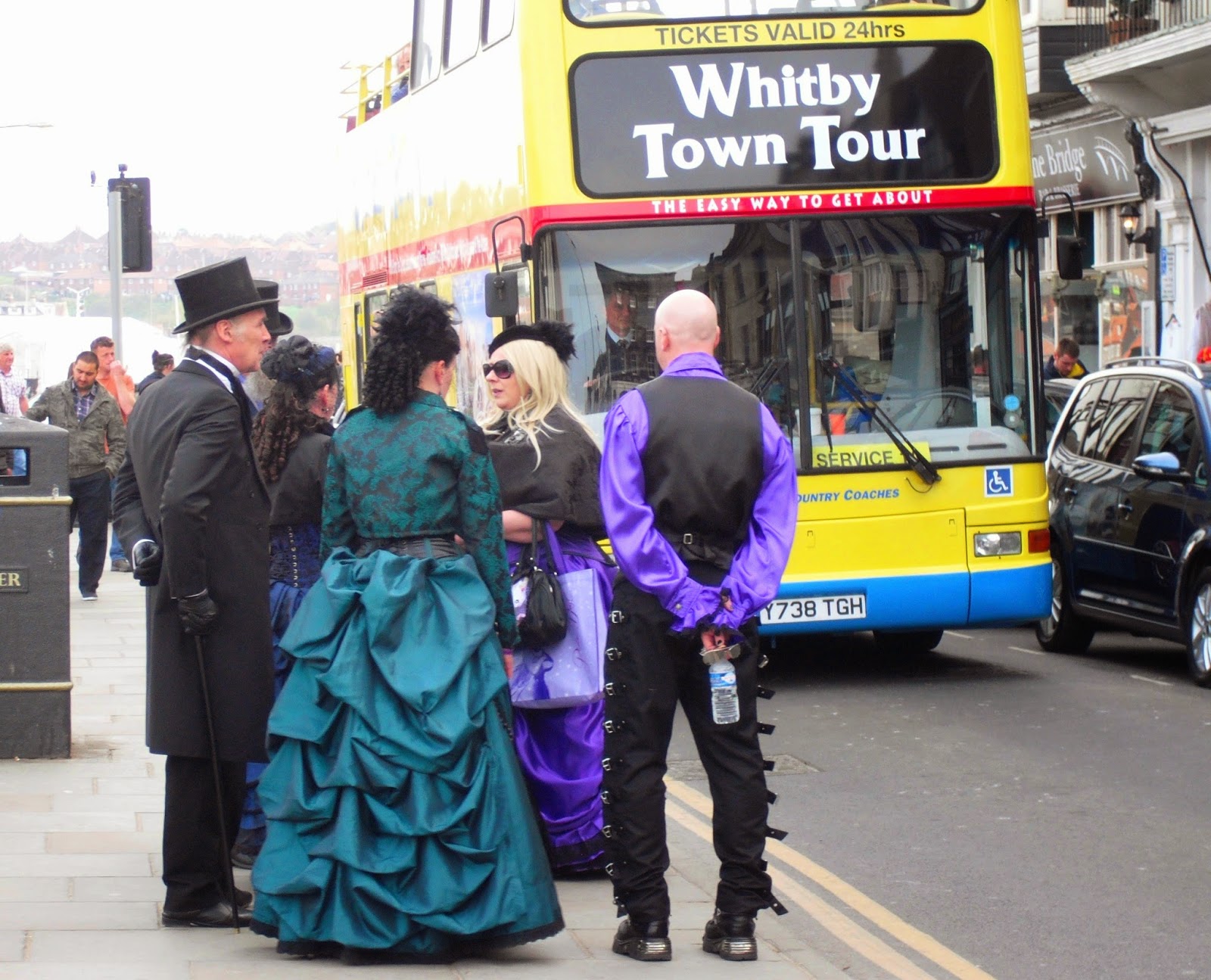 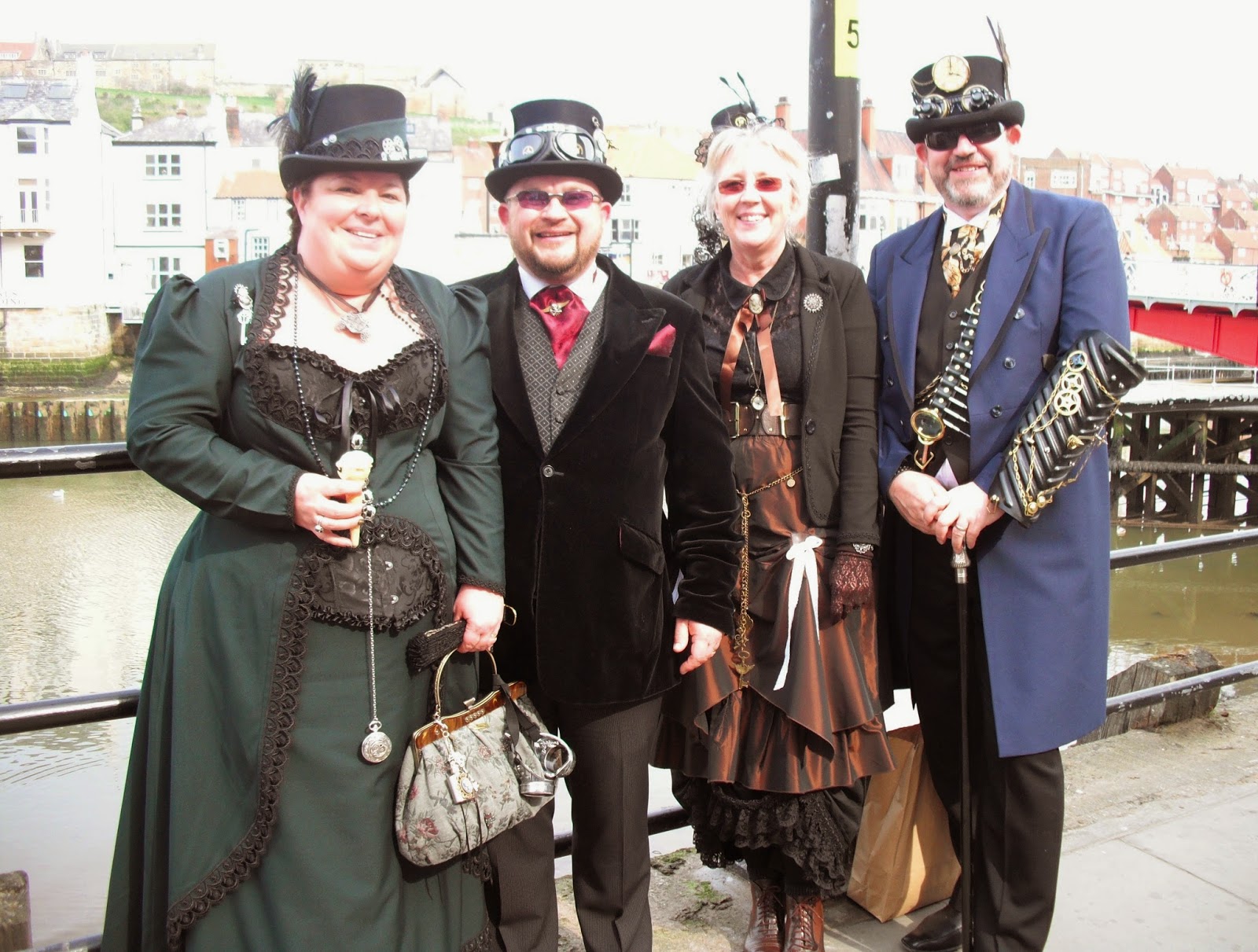 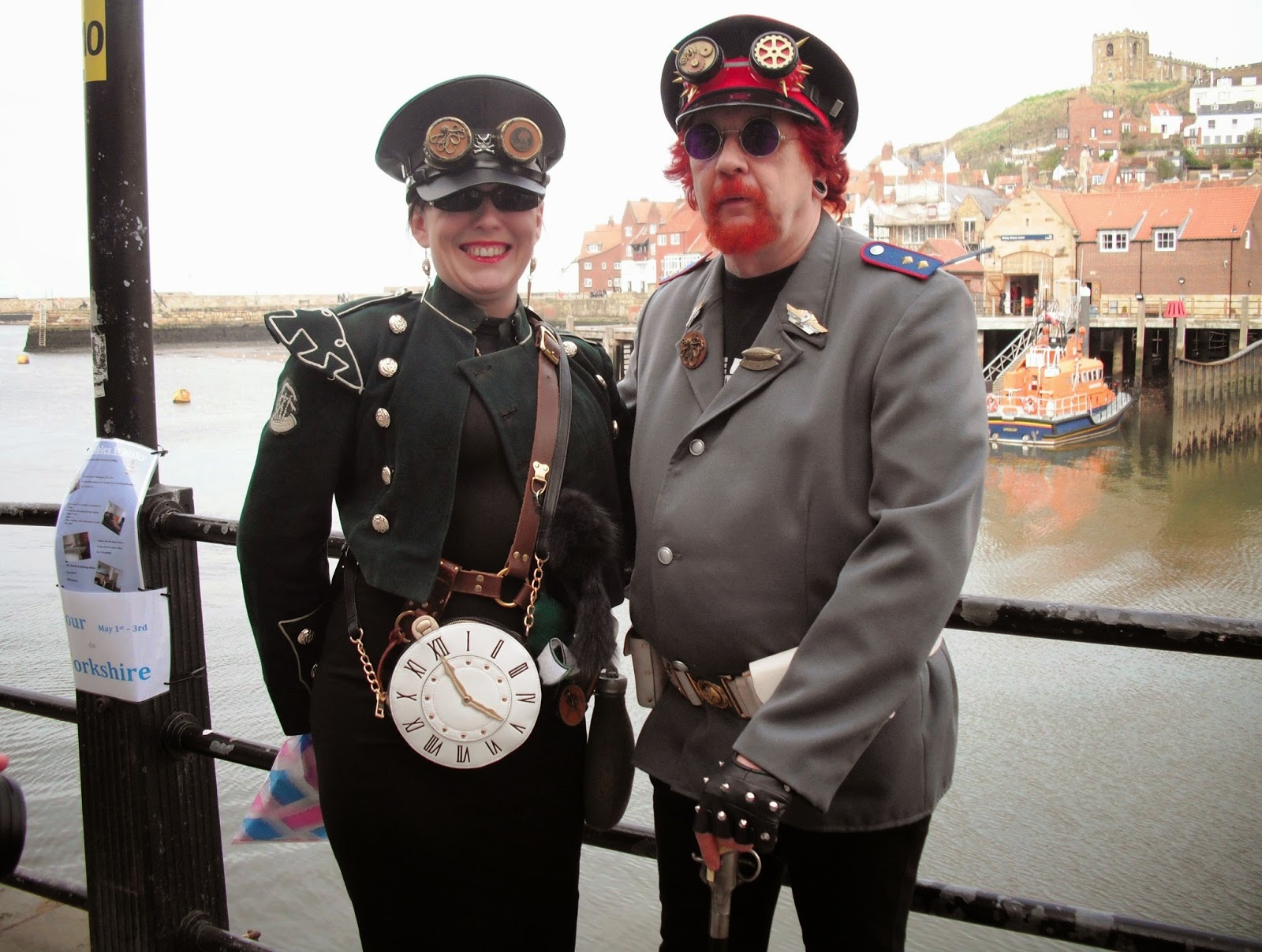 Meeting up with your mates at the pub. 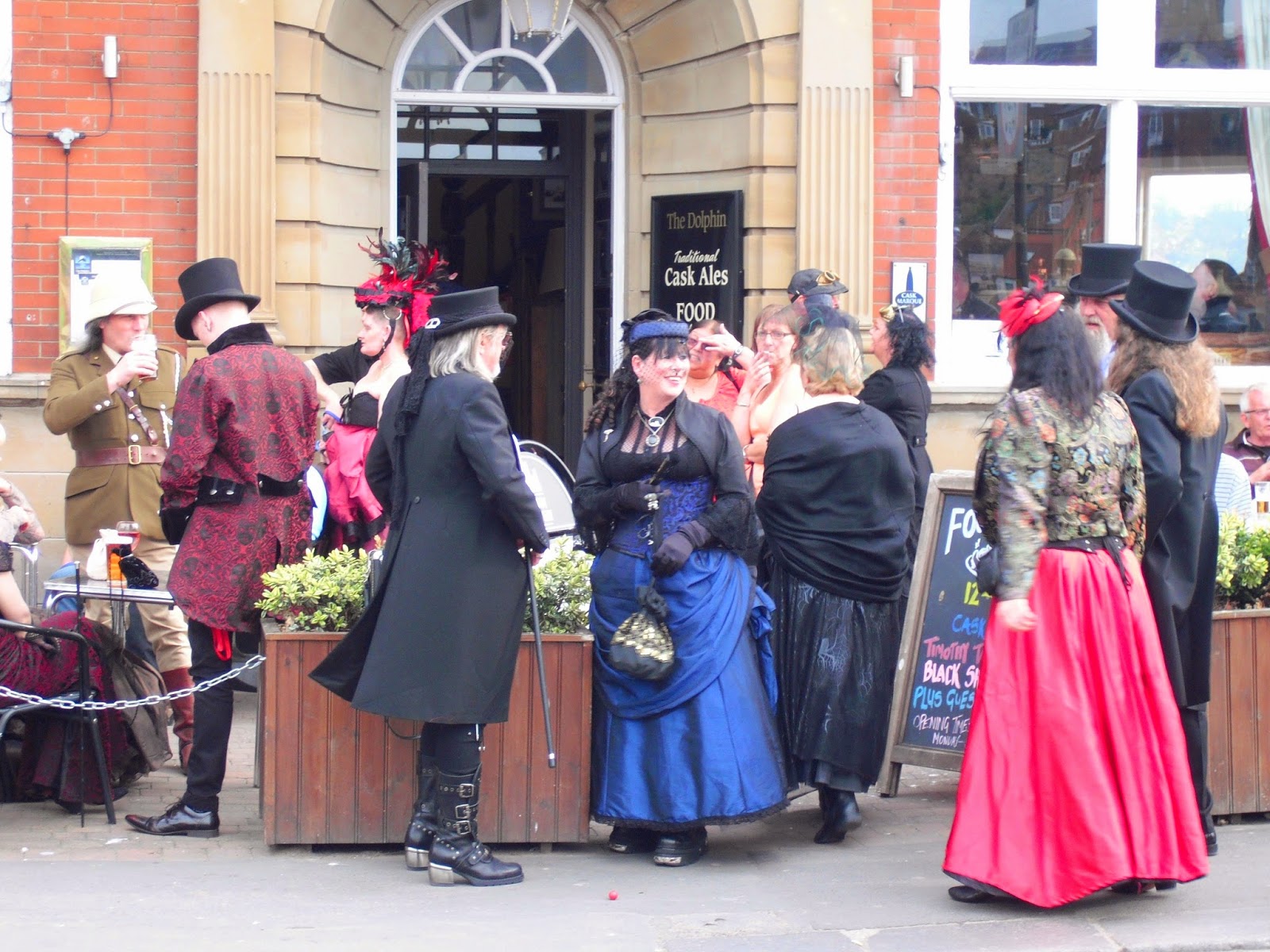 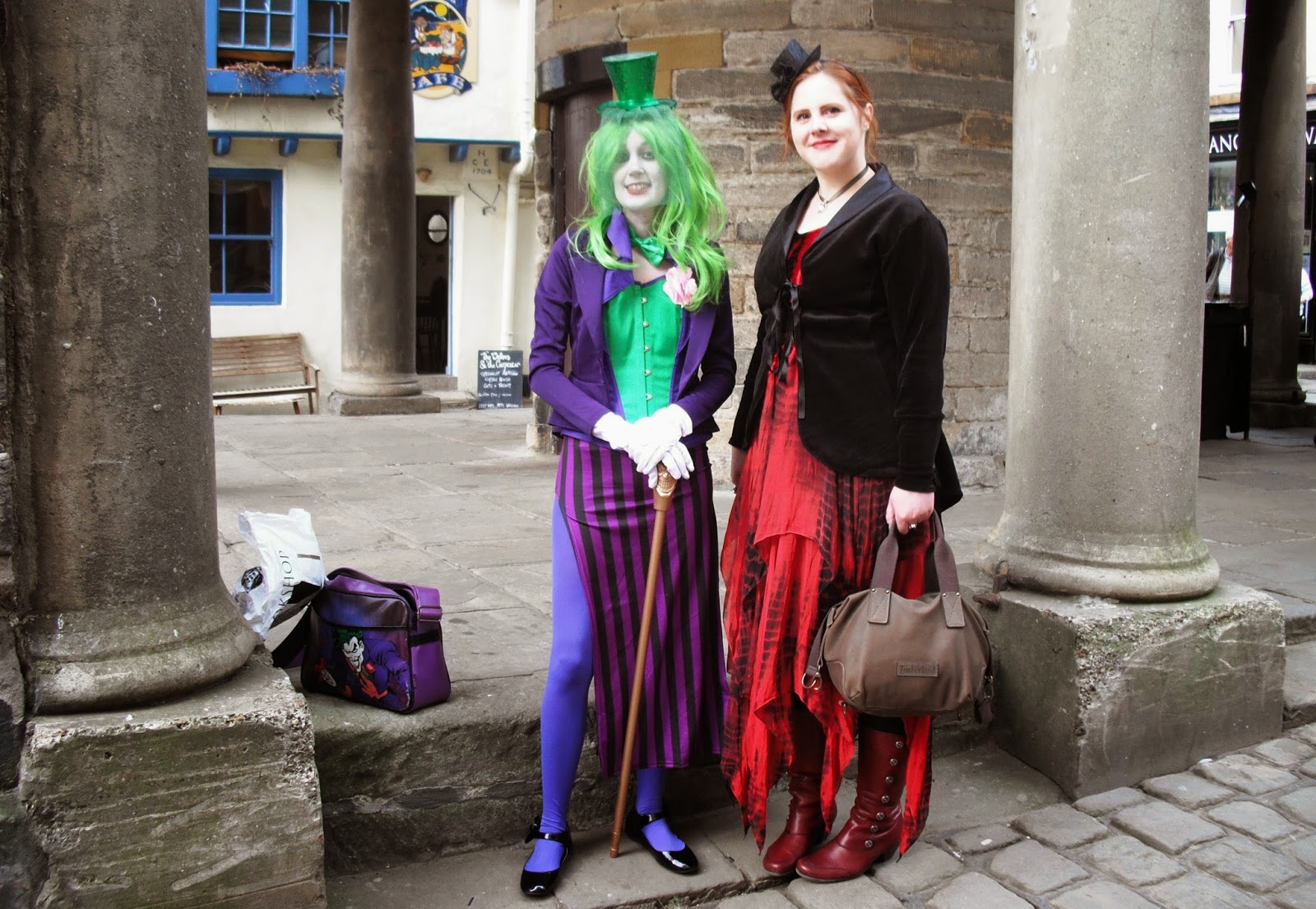 It's not just Goths that join in, there are Punks, Steampunks, Bikers, and fans of all genres of the alternative lifestyles who turn up. I saw a few cross dressers, big muscle men in short frocks and towering high heels. Some had wigs on, some didn't. People had whole face masks on, lots of lace and feathers, lots of purple, red, and black attire. One young lady wore an eye popping outfit. She was tall already without her ten inch heels. A buxom young lass with a tight lace up corset and frilly tutu, but all eyes were on the chesticles. They  were like a jelly not quite set, which was about to spill over with every step she took. It must have been quite uncomfortable trussed up like that. 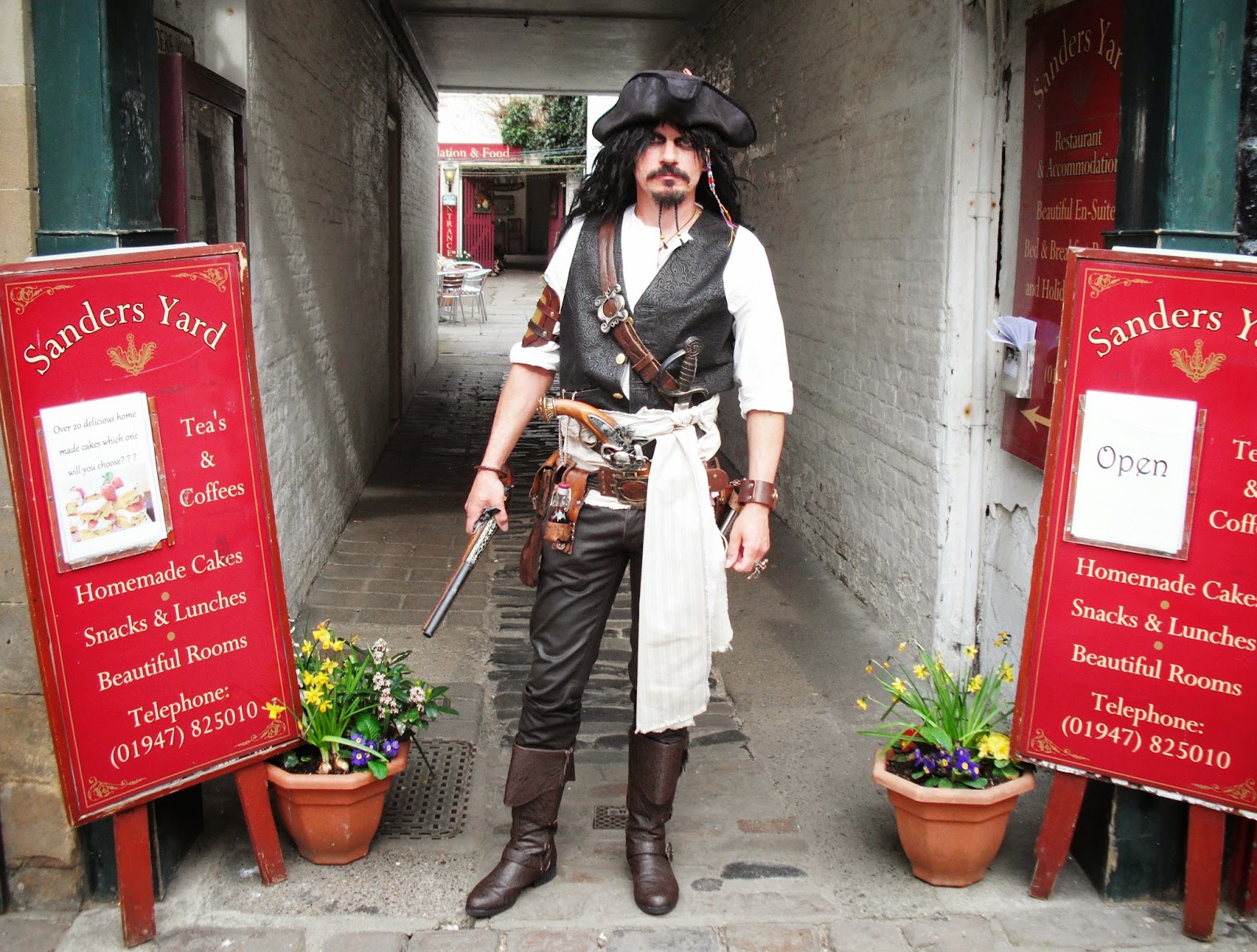 Rocky wants to go fishing. It wasn't only me taking photo's of Rocky, he gained a lot of fans as he posed for their pictures. 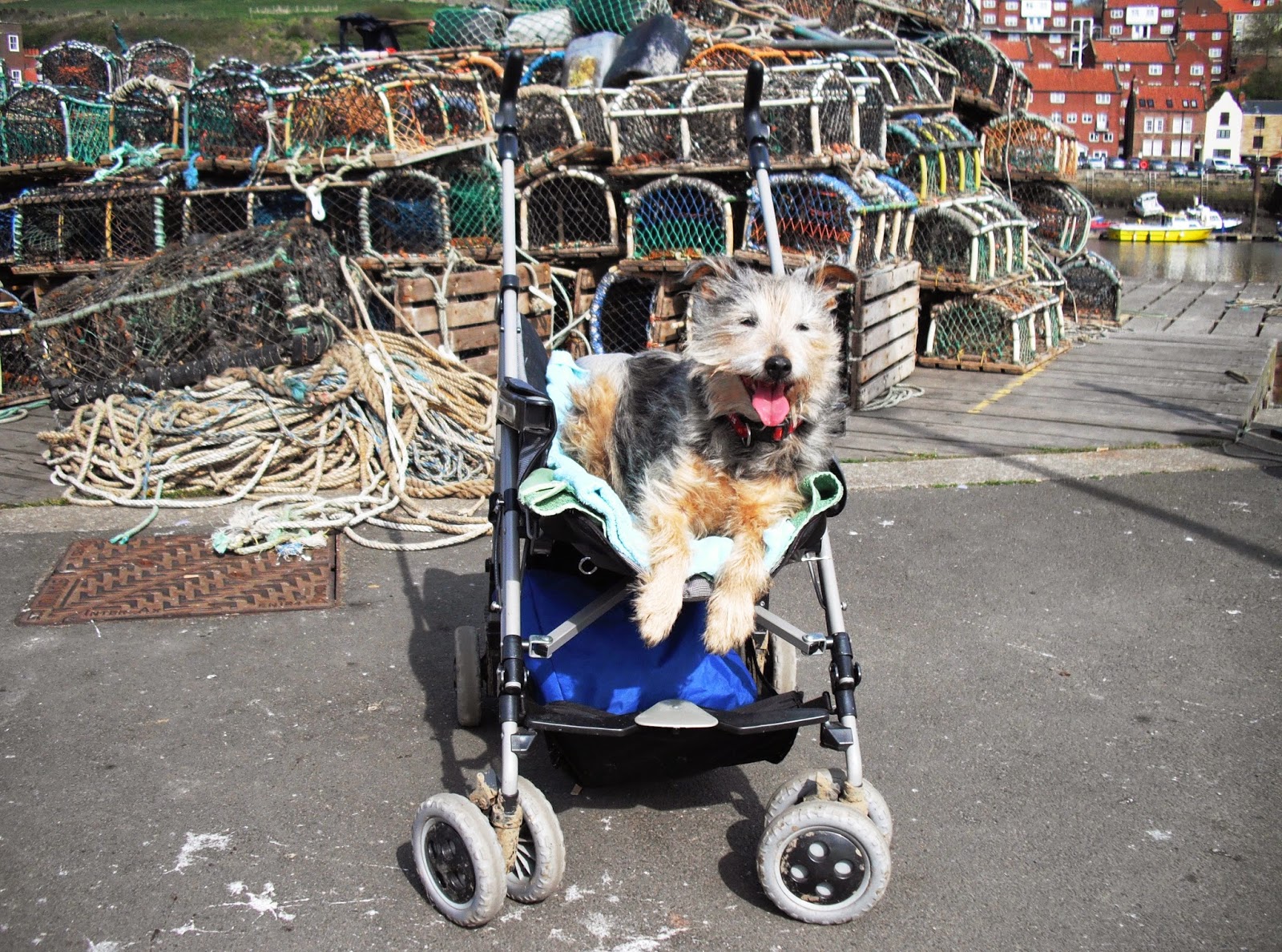 The bridge between the two sides of Whitby. It will open if a boat wants to go through. 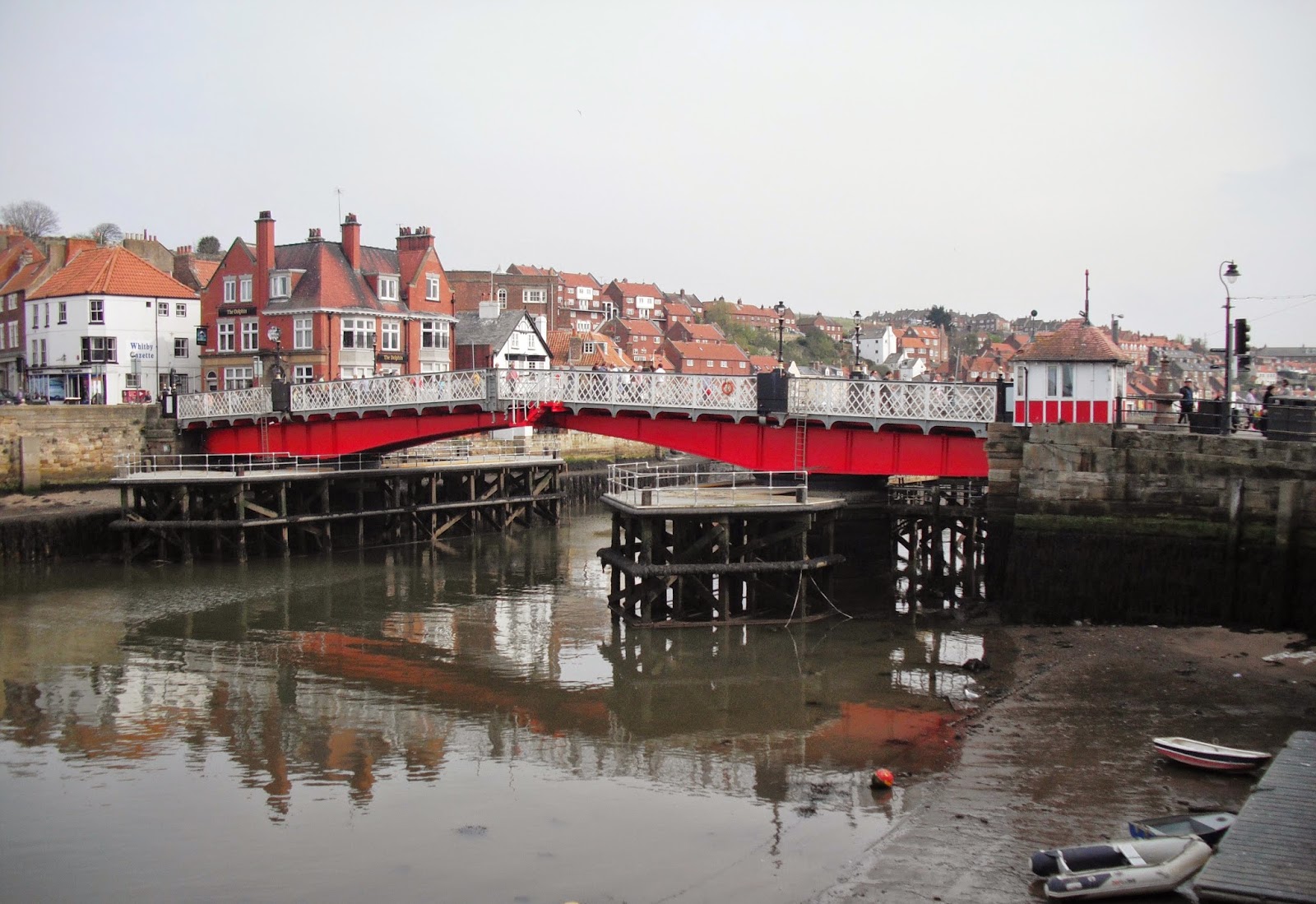 Boat trips were on offer, but not many takers. 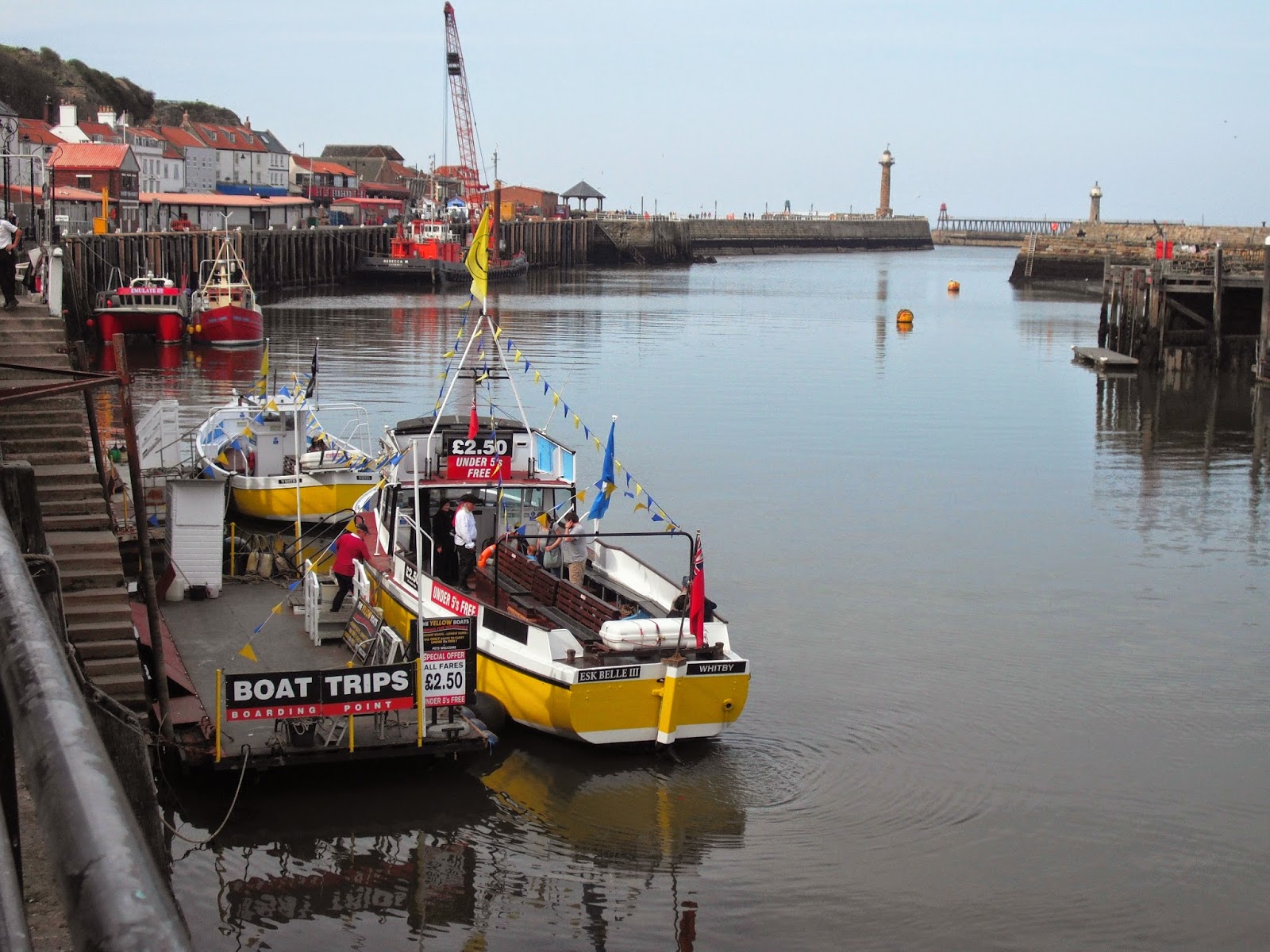 Anyone for a ride in this? A few did make the trip out of the harbour. 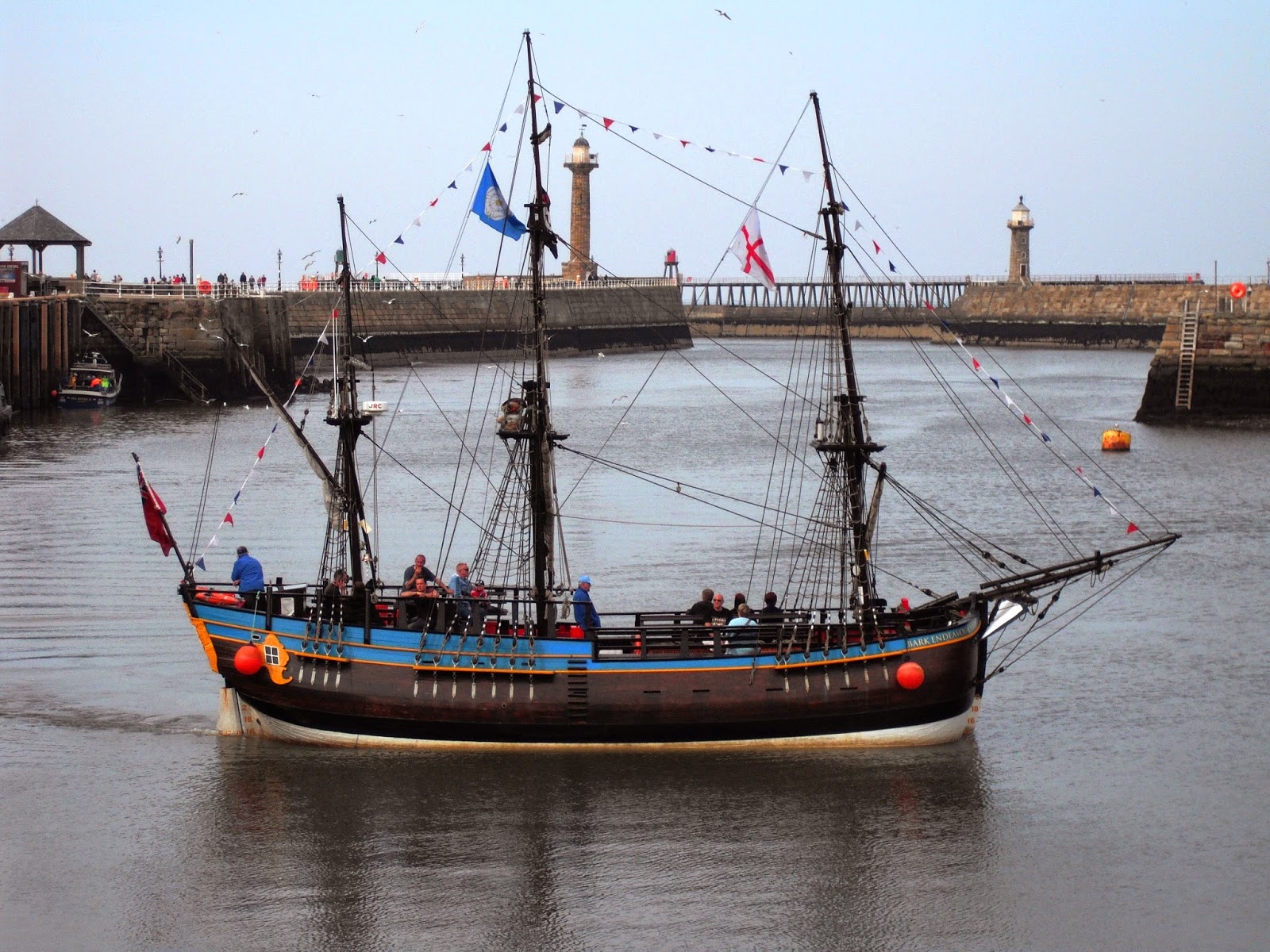 After a very enjoyable afternoon, with quite a lot of physical exertion on my part, we went off to a camp site a mile or so out of town. I had been chatting to a photographer who told me about it. It was a smallish site on a farm, I paid the £7 and found a pitch alongside a fence in between other tents. The wind had got up by that time, it was an exposed site, so I decided not to put the tent up, and sleep in the car. More about that on the next post, but for now, it's Toodle pip, while I enjoy a glass of wine. Catch you tomorrow.
Posted by Meanqueen at 20:22