Hello. A book is a good place to get lost in, and I'm afraid that I don't always make time to read. I pick books from the library and often they only get a skim read, picking out a few pages. The last couple of weeks though I have needed to fill my brain with distractions and a book is a good way to do that.
I like rags to riches stories, and I had heard of Toni & Guy the famous hairdressing conglomerate, but knew nothing about it's origins, so I chose this book. 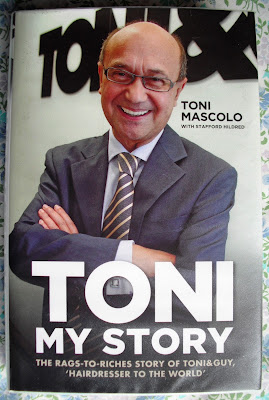 Toni Mascolo was born in a small town near Pompeii in 1942. His father was a barber. The whole family moved lock stock and barrel to London when Toni was 14 years old. They rented rooms in a large house which was occupied by several other Italian families. Toni's first recollections of an English school was to find no order or discipline, noise and wild behaviour was normal. He was shocked at the difference to his previous school in Italy.
When he left school he worked with his father in a hairdressing salon. At the age of twenty he was devastated by the early death of his mother, and being the eldest son, he took over the role of keeping the family together.
Jumping ahead a few years, Toni and his brother Guy opened their first salon in 1963, in Clapham Park Road. In ten years they bought two more salons, at Streatham and Mitcham, and realized that to establish themselves as leading London hairdressers, they had to move to the city. It's interesting to note that he said no one wanted to publicise a suburban salon, and the area around their salons was changing with a huge influx of immigrants moving into that part of South London. He said it was like introducing a nation into a nation when they all arrived at the same time. Funny how this is a talking point at the moment, history moves in circles.  Now, after half a century of amazing expansion, there are more than 500 salons across the world.
On the whole I enjoyed the book. I enjoyed reading about the early years, the last few chapters focus mainly on the expansion of the company, which would be of particular interest to anyone looking for lessons on how to grow a business. Give it a go.
Yesterdays dinner. Onions, chick peas, mushrooms, half a tin of tomatoes, and Quorn sausages, on two microwaved potatoes. I made two portions and about to have the second for lunch today. 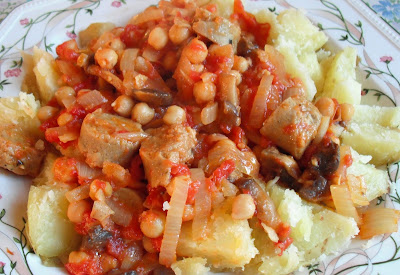 The sun is shining and I'm off to road test the boots shortly, so I'll say tatty byes for now.
Toodle pip
Posted by Meanqueen at 11:43