I've knocked up some bunting this morning. The fabric came from the Scrapstore, £2, it was a sample book. I liked the colours so I bought it. Would make some nice bunting I thought, or maybe a bag. I took the book apart and each page had a strip of paper on the back with the colour code on it. A small craft knife soon cut through the stitching and it was easily peeled off. I didn't use the browns, too dull, wanted to keep it pretty. 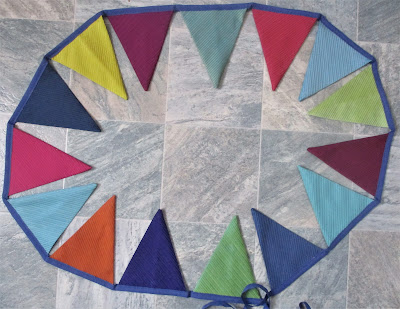 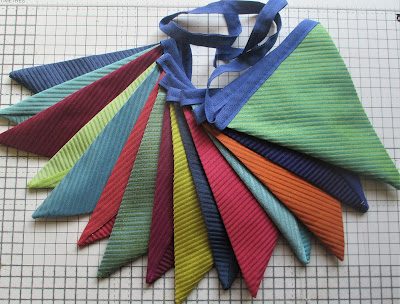 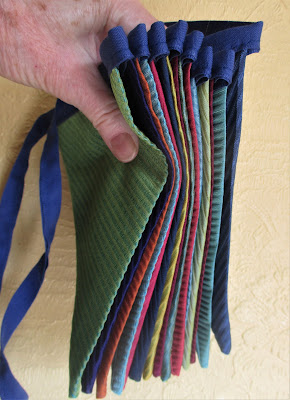 Easy way to make these is to cut the fabric into squares, I only had to trim a couple of inches off. Fold in half corner to corner, sew down one side. Turn the right way so seam is inside, you then have a triangular piece like a three cornered paper bag that we used to buy sweeties in. Iron it flat with the seam running down the centre at the back. Fold over flap and tuck it inside like an envelope, and iron. I had the blue tape in a bit box that someone gave me. You need a strip of the right length, fold it in half down the centre and iron flat, then trap the tops of the flags in the middle of it. Pin and sew.

The weather has taken a turn for the better, it was quite warm yesterday. The brown bin was emptied, now it needs filling again, so back to the hedge trimming. The grass might be dry enough for it's first cut now, it's gardening season again. Lunch now, then I'm off outside.
Toodle pip.   ilona
Posted by Meanqueen at 11:47