I sometimes talk about litter and fly tipping because I get fed up of seeing it. We have a wonderful countryside and it is often blighted by dumped rubbish and wanton littering. People chuck their rubbish anywhere they please because they are lazy. Out of sight out of mind.
I took a slightly different route on my walk on Saturday, I expected to see some rubbish. Yes, there was fly tipping, bin bags full of bottles and cans, and some littering as well. It was an ugly sight. Some of it had been there for a long time. I rearranged the masks into an artistic collage draped on the brambles. 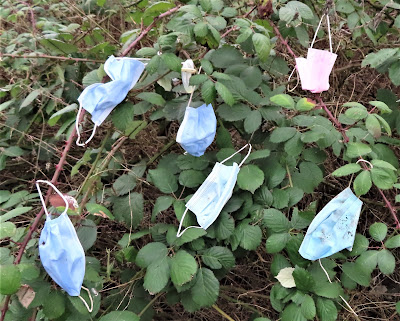 If you look closely a used condom adds a touch of authenticity to the scene. It proves you can still enjoy a bonk while not actually looking at your partners face. 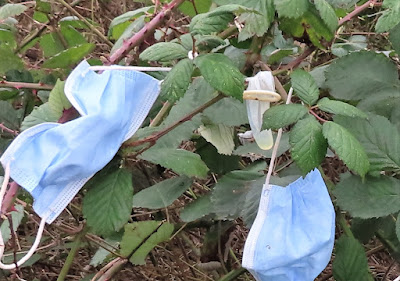 While I was constructing this masterpiece a big four wheel drive pulled up, an officer of the law opened his window for a chat. He asked me if I had seen any quad bikes around. Apparently they come here for a blast through the woods and across the fields. I said no I hadn't .
I made a comment about the awful mess and what I had found. He said it is a well know spot for men to come to after picking up their chosen prostitute in town. They drive out to the countryside to complete their business.
I noted that he was part of the rural law enforcement patrol, as it said on the side of his truck. In the back seat he had a life size plastic sheep. I wondered what he used that for, a decoy maybe, while looking for sheep rustlers. I told him about the dead sheep I had found. He said he had heard about that.
Litter, or trash as people call it, is widespread. The German in Venice Beach, Los Angeles reports that a whole train load of Amazon parcels have been robbed. They used bolt cutters to open up the containers, and open up the packages, discarding what they didn't want. My goodness, what a disaster. Makes you wonder how many parcels go missing in transit.
Now I must go to the Post Office to get some cash. I need to take my car keys to the garage and get them to check the batteries. For some reason I can only open and close the locks with one click. To fully lock the car I should click twice.
Thanks for popping in. Toodle pip.   ilona
Posted by Meanqueen at 11:47