The sun was out yesterday so I put some snacks and a drink in my rucksack and went off down the M18 and A1M into Nottinghamshire. I think I might have been a bit over the border into Rotherham district which is in Yorkshire. I'm not sure where the county borders are there.
I spotted some footpaths which needed an explore. I parked at Firbeck. which is between Blyth and Maltby. Found a spot opposite the pub, on the roadside, on a bend. First I had a look at the church before I set off. Two views from different angles. 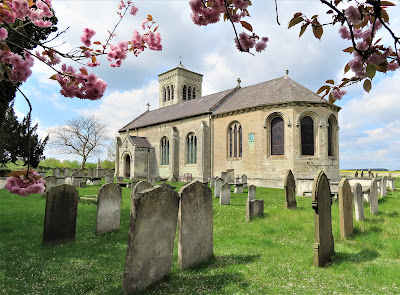 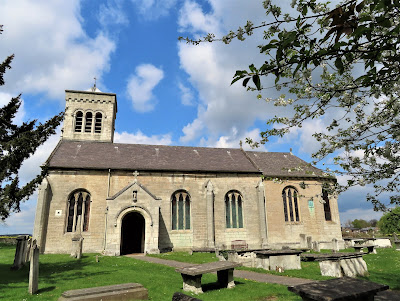 I love looking around villages, all the different styles of houses. This one looks interesting. 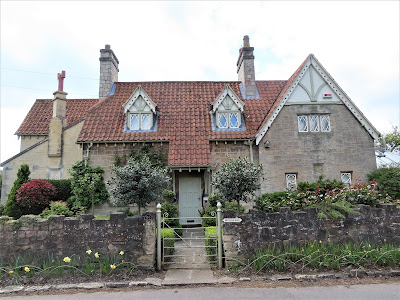 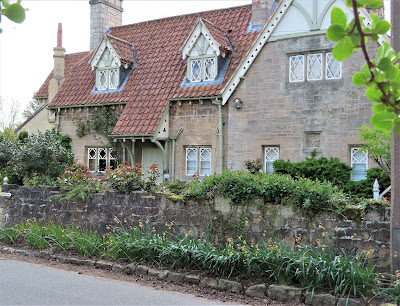 The house opposite is a similar style. 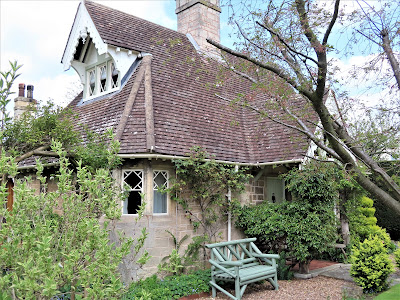 A peek over the garden wall. A sea of flowers. 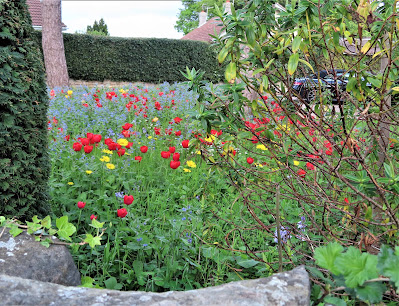 Firbeck has a big hall. I couldn't see it because it's in it's own grounds and surrounded by high fencing with a big gate at the entrance. It has been under renovation. I found a short video of the site, filmed from a drone. Have a look at it here. This was filmed two years ago. I have just found a web site advertising the apartments for sale.
From Firbeck I followed tracks through and around fields and arrived in Langold. I have been here before, but this Community Memorial Garden I missed. 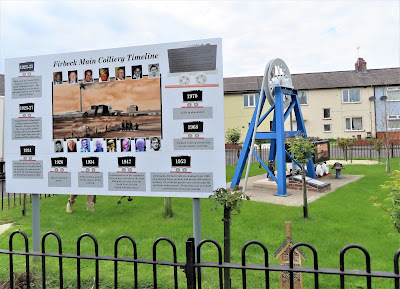 I had a lovely chat with these two gentlemen who were working to keep it in it's pristine condition. They gave me the lowdown on it's history. A £10,000 grant was funded by the National Lottery to provide an open space for local people. I was told to come back in a few weeks time when all the roses would be in bloom. 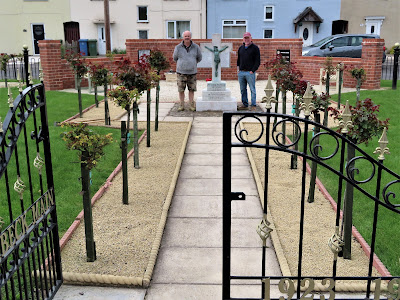 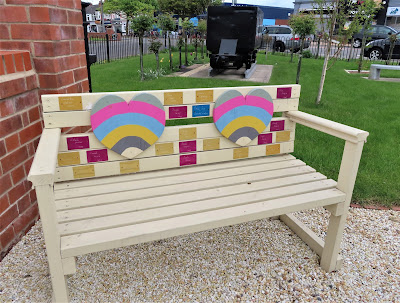 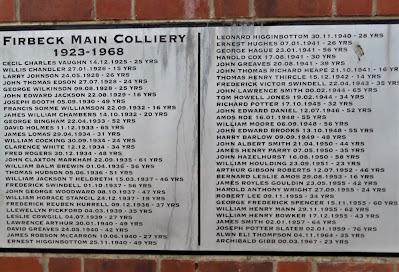 From Langold I made my way towards the Country Park. No need to walk around the lake this time, I did that a few weeks ago. I went off down a track through a wood which took me into a field. Miles of yellow, and a gorgeous aroma coming from it. I love that smell. 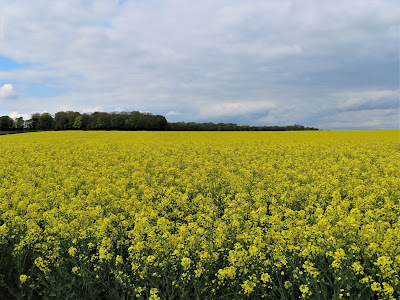 Coming down a track with hedges both sides of it, I kept hearing odd sounds, like clattering and banging. As I got to the end of the track I could see where it was coming from. Six people were following a tractor across the field. They were clearing all the large rocks. Some were tossed into the bucket on the back, others were thrown over to the edge and landed in the hedge bottom. 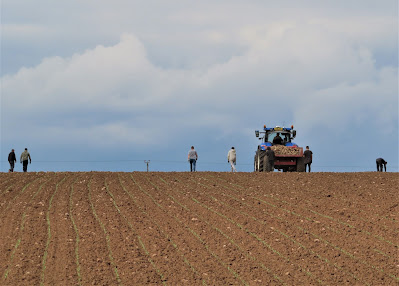 I came into the village of Letwell. These houses used to be shops many years ago. 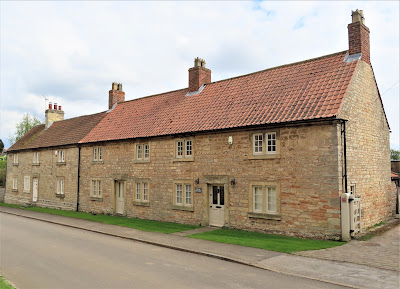 I had to zoom into this restored Dovecote. There wasn't access to get close to it. 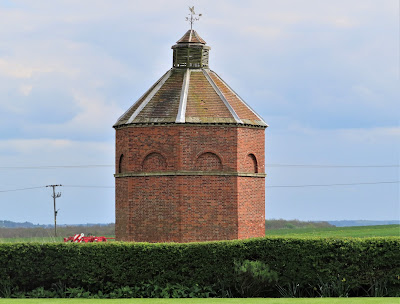 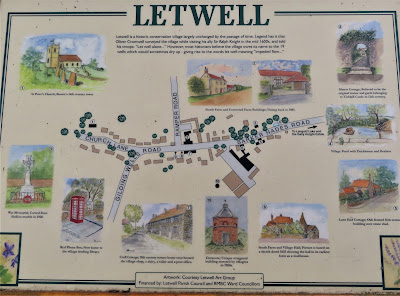 On my way out of the village I passed the church. Time for a sit down and a bite to eat. It was getting cold so I put my jacket on. 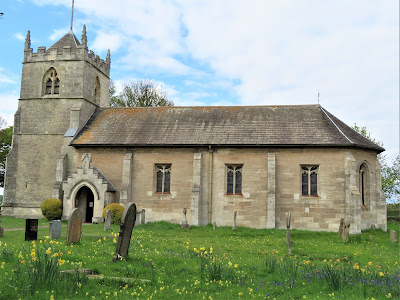 It was a long walk through the field after that. This path is easy to follow. 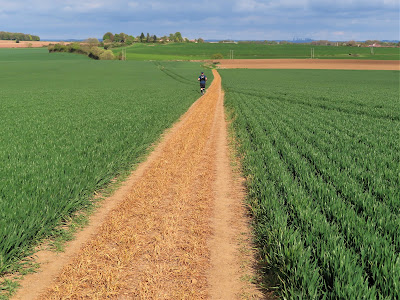 That building is Thwaite House Farm, that's where I am heading. Close up the house had a very modern look about it. Big glass doors at the entrance. 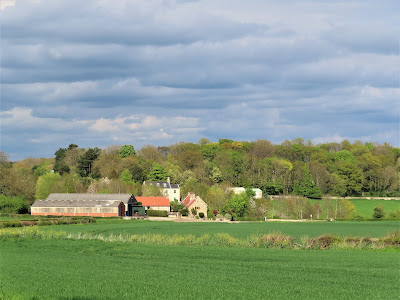 I could hear a lot of baaaaaaa'ing. Thinking I might see some cute white fluffy lambs. Nope. Cute black fluffy lambs. 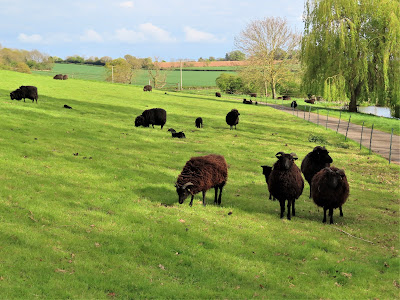 Time to get a move on back to the car. It was 6.30pm when I set off back, and was home in an hour. Only seven miles walked. I am on target for the end of the month, so I can dilly dally a bit and enjoy the walk without it being a slog.
Thanks for popping in. We'll catch up soon. Toodle pip.   ilona
Posted by Meanqueen at 20:03