Well hello, how are you, welcome, come on in. We have a little celebration going on, the 2nd of January is the anniversary of the very first blog post, eight years ago, so Happy Birthday blog.
After an operation when I was 59 I had 12 weeks off to recover, and when I was ready to go back to work, they announced they were closing the depot. I didn't have a job to go back to. And so I became unemployed. I didn't have much money because I had been reducing my hours at work, which reduced my pay. I had also been living on a pittance, my JSA had been reduced because I was receiving a little bit of insurance money. Those were hard times, but some of it was of my making because I scaled back the driving. It was just unfortunate that I had to take sick leave for a while.
So this blog was started in the January, and I survived on little money until my 60th birthday in May. It was a big sigh of relief when my pension kicked in. Things are much improved now, my thriftyness and penny pinching has helped me to pay off my mortgage, change my car twice, and have holidays and days out. Now I am ticking over nicely living within my means, and happy with my lot.
I think I have had all the mileage updates for the 2016 walking challenge. Counting up, 21 people have passed the 1000 mile mark. I think that's bloomin great, you should all be proud of yourselves. Some of you have come very close to it, also a great achievement, and a lot of you have done so well by sticking with it. As I always say, having a go and doing what you can, is better than sitting on your bum and doing nothing. So well done everyone.
The challenge was not a competition, not a race, but I've picked out two names at random for a prize. So step forward Helen D and Vicki. Big cheer. Send me your addresses and I'll send you a little surprise in the post.
Up to now there are 50 names on the list for 2017. Wouldn't it be good if we could get half of them to the 1000 mile mark. It would be chuffin great. 25 people fitter than when they started at the beginning. I know December is a long way off, but as you can see, it is achievable Good luck everyone.
Right, what's next. My lunch yesterday. Not much food left in the fridge. A spud in the microwave, grated cheese, a tomato, and sliced beetroot. A nice simple cheap meal. 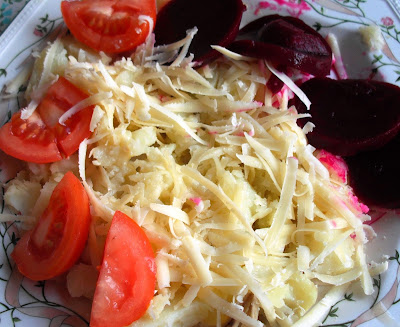 The other day I made this, enough for two days of lunch and dinner. Two smallish onions chopped, handful of Quorn pieces, carrots, Brussels Sprouts, frozen broad beans, sweetcorn, and frozen cranberries. Start it off with a slug of oil, add water and splash of fruit juice. Curry powder, turmeric, vegetable granules, coriander, Danish blue cheese, and cream cheese. Simmer till veg is soft, add water if needed. 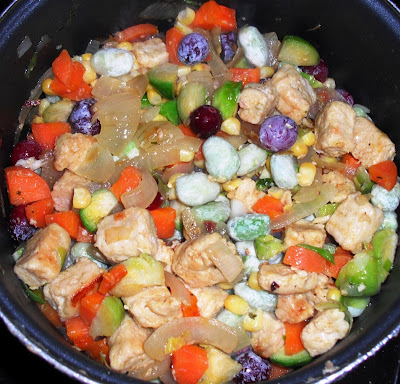 I cooked plenty of wholemeal pasta, enough for three meals, and the fourth portion was a topping on a microwaved spud. I didn't bother freezing it, kept it in the fridge, and microwaved it before eating. My goodness it was ever so tasty. I will need to go shopping at some point this week, seems like ages since I last went to the shops. Not much left in the fridge. 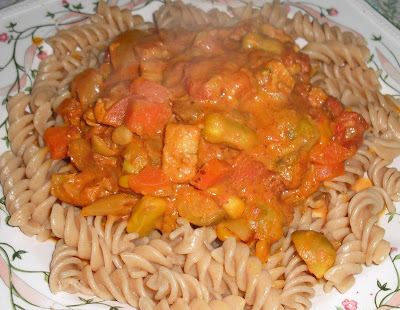 Find the cat. Heidi has a new hidey hole, ha ha. Isn't it funny, just when you think they have found the ideal place, they move on to somewhere else. 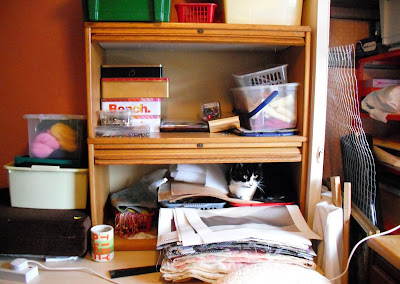 That's it, all blogged out, nowt else left to say. Thanks for popping in, we'll catch up soon.
Toodle pip
Posted by Meanqueen at 18:52