Hello. It's chuffin cold outside, freezing cold in fact. I went out to do my walk and came straight back in to change into a thicker, heavier jacket with a hood. Three miles and one hour later and I was back. It would have been 50 minutes later, but I stopped to talk to Ken and Jade dog. She was a bit mucky on her back, I expect she is happy now that she can roll about and run free in the fields.
This was last night's dinner, and I had exactly the same for today's lunch. Piping hot Quorn and vegetable mild curry, very tasty. Another portion left for dinner later. The fridge is bare, not much left in the freezer, and only a few tins and packets. I have to go to town tomorrow so I will pick up some more supplies while I am there. 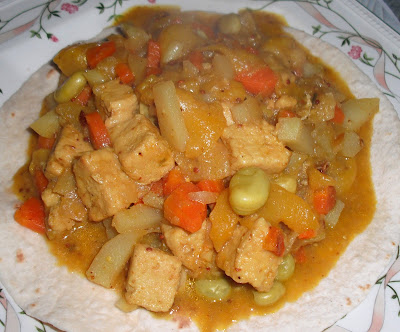 Have you noticed that this time of the year is like being in a void. The space between New Year and Easter is a bit of a no mans land. It's all a bit dead and flat. I feel like something ought to be happening, but not sure what. I keep busy, but it's getting a bit samey. I need a project.

It seems I am mentioned in a newspaper article in The Times today, about frugal living. I can just about make out the text on my Twitter feed, it's a mishmash of what's already been in print in various other newspapers. I don't tweet very much, mainly follow people I am interested in. Mainly people I have met, or who I would like to meet.

I was just thinking the other day, that I have never been on a protest march. I can't think of a cause that I feel so strongly about that would tempt me to join in. I have never liked being in a big crowd of people, and have only been to a couple of big star concerts. Cher at Sheffield was good, and Meatloaf at Birmingham was good.

Thinking back to how I was treated as a lorry driver in the 70's and 80's, I felt the best way I would survive was to knuckle down and quietly get on with my job. I always felt I was equal to men, I just happened to be in a different body. Times were tough, the men didn't want me there, but I stuck it out because I felt no matter what I looked like, I was equal to them.

Life is unfair for everyone at one time or another. I remember going to London to appear on a chat show on TV. It was a live discussion on a new course offered by Shell, the oil people, to train women to drive trucks and get their licence. I felt this was positive discrimination and unfair. If they were offering free courses for women, they should offer the same amount of free courses to men. In my eyes, equality works both ways.

Anyway, I'd better wrap this up. I need to get off this computer and do something else.

Thanks for popping in, we'll catch up soon.
Toodle pip