What's Goole all about?

Hello. Me and the pooch went for a ride out yesterday, we were fed up of staying in. Well I thought pooch was fed up, maybe he wasn't. I put a few bits and bobs into the car, he stood at the door watching me, then I put his collar on, and when he saw the open car door he scurried back indoors and into his bed. Oh dear, he doesn't want to go, I thought. C'mon Rock, we is going for a ride, I picked him up and plonked him on his favourite cushion on the front seat. He was alright once he was settled in and I explained to him that it wasn't going to be a long journey.
I had Goole in mind, with a nice leisurely drive, crossing over the River Trent at Gunness Bridge and up through the country lanes, through the villages of the Isle of Axholme. It isn't really an island, but it's surrounded by four rivers, the Ouse, Trent, Don, and Idle. This site gives more information.
After tootling through the villages we came to Reedness, which is not far from the River Ouse. Spotted was this redundant Chapel, now up for sale through auction to take place in September. Originally it was on the market at £55,000. I would love to live in a place like this, but not this one in this location. It was flooded in December 2013 when the tidal surge hit many villages along it's banks. Even those a good distance from the waters edge suffered the same fate. Also this building is a bit too close to the road for my liking.  But if you are interested, here is the listing on Right Move web site, which shows pictures of the interior, and side gardens. 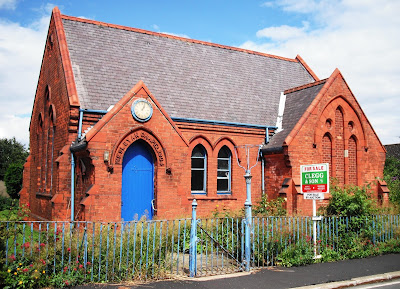 We arrived in Goole, and I was careful to find free parking. Thank you Leisure Centre. 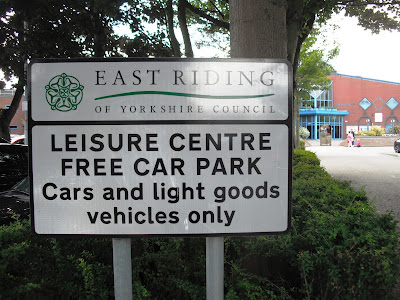 These are the signs you have to look out for to make sure you are not ripped off. Sharing the same entrance as the Leisure Centre is a retail park with a large car park. The signs are high up on posts, you have to squint to read them, the wording is intimidating, and anyone in a hurry could be caught out if they are a few minutes over their time. Even one minute will bring a demanding letter through the door. As I have said before, if you are unlucky enough to make a mistake, then the first place to appeal is the owner of the shop you bought goods from, save receipts. If no joy there, go to the MSE forum and follow the advice on there as regards appealing to the company. Be prepared to be bullied into submission. There is a court case going on at the moment, a Mr Beavis has taken his appeal to the highest court in the land, and a judgement is expected in October. If he wins, and I sincerely hope he does, it will set a precedence as to how private parking companies run their business in the future. 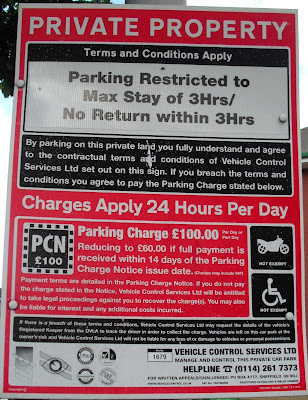 Right, now I have got that bee out of my bonnet, we are parked free at Goole. The town is built on docks, and in the middle is the wonderful St John's Church, left standing among the huge freight sheds. A little bit of calm among the heavy industry. Shame there wasn't a bench to sit on. 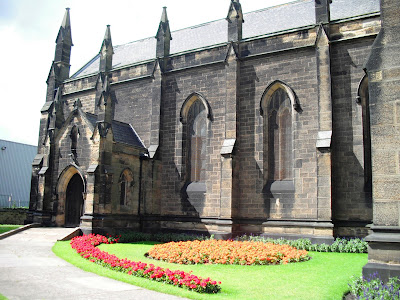 The town centre is pedestrianized, this is an interesting resting place, made of stainless steel, the pictures and words all cut out like stencils. 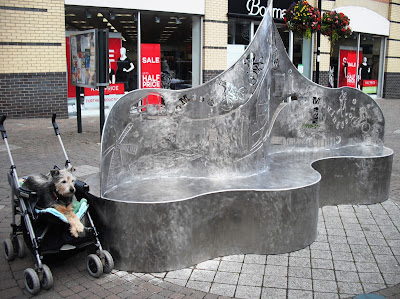 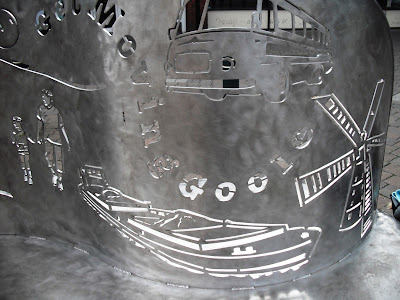 The Clock Tower stands tall in the centre of a roundabout where six roads meet. 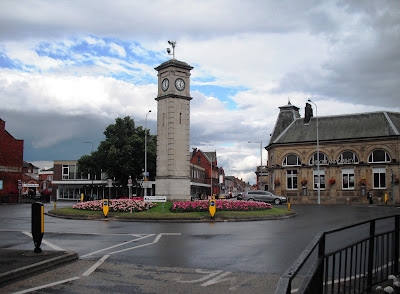 I used to have an outdoor stall at the market, it was flippin freezing standing around, and not many customers. I had to give it up. I remember another stall holder felt sorry for me stamping my feet to try and keep warm, she gave me a pair of fingerless knitted gloves. I still have them years later. A kindness not forgotten. 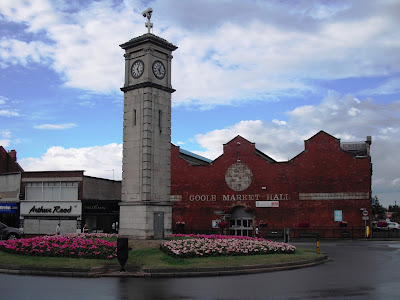 There are many old buildings like this one, all reminiscent of a thriving dock town. 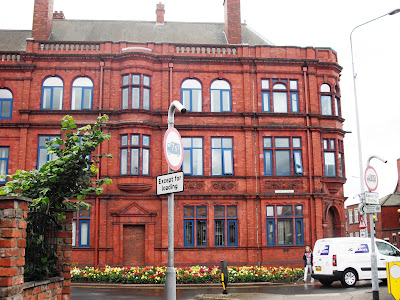 We didn't escape the rain, one heavy shower had us sitting on a bench under the canopy at Morrisons Supermarket for half an hour.

I like to look round a working port, but alas, there are not many docks accessible to the public. I have a fascination for heavy cranes and marvel at the skill of the operatives. 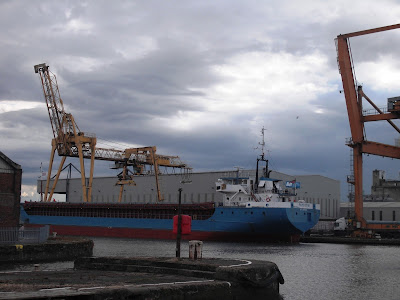 The Lowther Hotel in the background. 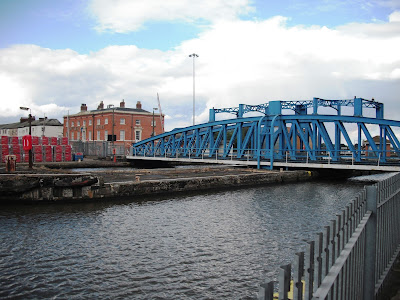 This is the Sailors Memorial Garden, on the banks of the river. It has a fence around it with a locked gate. 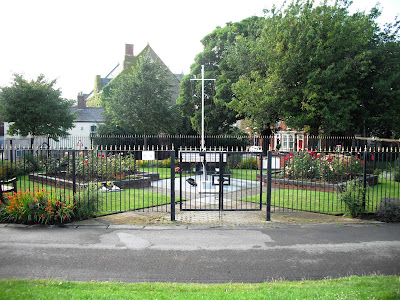 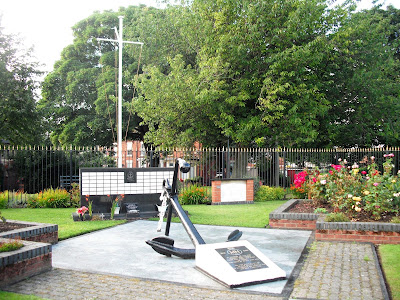 Time was getting on, I was a bit late starting out anyway, so it was back to the car, and a quick drive down Dutch River Side to the Yorkshire Waterways Museum. The museum was closed, but I had a walk around the marina. If you want to visit, the museum it's free to enter. A few pics. A massive place with lots of residential canal boats. 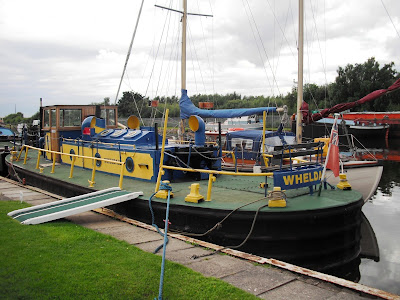 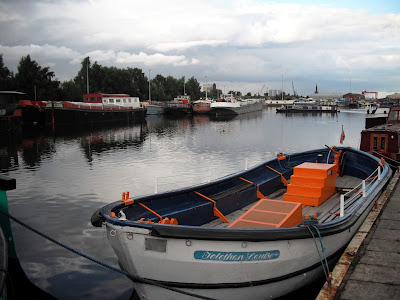 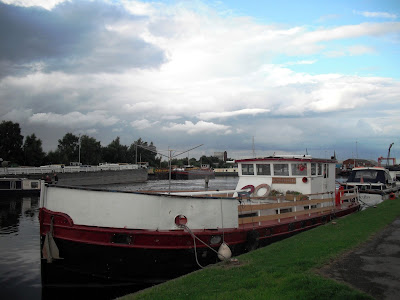 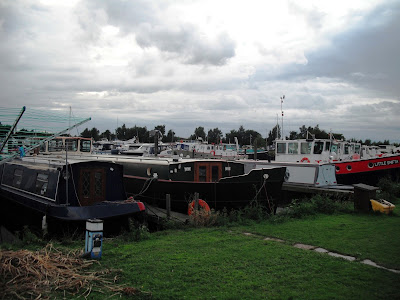 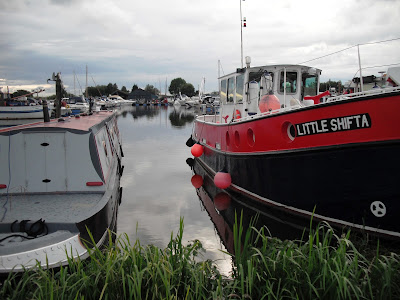 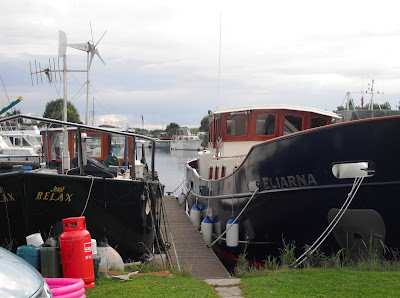 Take a look at the website if you want to know more.   There's a lot more to Goole than I saw, I just look at the bits that interest me.

It was 8pm when we finally landed back home. A nice afternoon out. Thanks for reading.
Toodle pip
Posted by Meanqueen at 11:07