Emergency fund to the rescue

Hello. I have been Christmas shopping, for myself. This is my present to me. 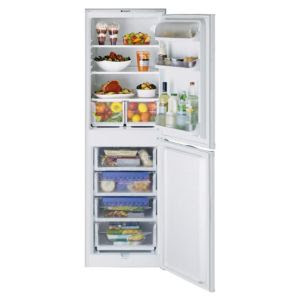 I've been expecting it, my current fridge freezer has been going a bit doolally over the last few months. The salad has been freezing in the salad drawer, and frozen soggy lettuce isn't nice. The thermostat has taken on a life of it's own, sending the temperature up and down willynilly, out of control. Now it has defrosted itself leaving a puddle on the floor, so it has to go.

I've still got the receipt for it, bought 8.5 years ago for £180. I was a bit dubious about buying an unknown make, but I had a height restriction at the time and it was the only one which would fit underneath a wall cupboard. Since then the kitchen has been renewed and that wall cupboard was taken out. Problem gone so I can have whichever one I like.

I have chosen the Hotpoint. There are plenty more expensive ones,  but I see no point in paying  extra for the  all bells and whistles version. I don't want a black one or a silver one, or a stainless steel one. I don't want an American one, or a water dispenser, or an ice dispenser.

I had some Tesco Vouchers saved up, and as they have a double up promotion on at the moment, it makes sense to use them on something I need. The price of the Hotpoint is £230, and with a reduction of £49, it makes it £181. I'm chuffed with that. Only £1 more than I paid in 2007.

Luckily I am in between yellow sticker shopping and was already using up what I had. I have been eating everything that has cost me the most money first, yesterday was the Quorn fillets, Quorn nuggets, and veggie burgers, followed by copious amounts of yogurt. There is very little left today, I have just eaten a portion of home made veggie stew, there was no bad smell, perfectly fine, and I haven't been sick yet, ha ha.. The half a tin of mixed salad beans stored in a mug pongs a bit so they have been chucked. My porch is not heated and quite cold, so a few bits and bobs will sit there for a day or two. They said 3 - 5 days for delivery, no charge. They take away the old one, no charge for that.

This is what my emergency fund is for, no worries about paying for it, the money is saved in the bank. Now I need to move the old one out of the way, and wait for the new one to arrive.

I'm off to the Christmas Tree Festival at the church in town in an hour, it finishes today and we have to dismantle our tree and take it away. Thanks for popping in. Enjoy the rest of your Sunday.
Toodle pip