Hello and Good Morning. Thought I would write a quick report on this book before I take it back to the library. A really good read. 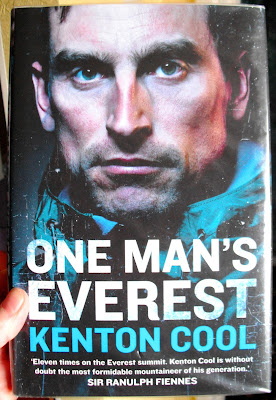 Kenton Cool is a renowned mountaineer and mountain guide, also a motivational speaker. The book says he has climbed Everest eleven times, I see on Wikipedia that he did it again last year, taking the total to twelve. He holds the British record for the most summits of Everest.

In 1996 while climbing in Wales, an accident almost destroyed Kenton's hope of climbing mountains. After a heavy fall which shattered both his heel bones he was initially told he would never walk unaided again. He spent four weeks in hospital, had three operations, three and a half months in a wheelchair, and months of rehab. He is still struggling to walk now, yet he still climbs.

Kenton's obsession with rock climbing started at school, and after his rehabilitation he has climbed extensively all over the world. The book is an interesting insight into the mind of someone who is so driven to the dedication of his sport. He details the escapades of the young Kenton and the risks he took, right through to becoming a much respected professional climber and expedition leader.

I always wonder what goes on in the mind of someone who is so focused to follow their dream, especially against all odds. What drives people to never give in, always pushing forward. Kenton describes in detail how mountaineering has become big business, large numbers of people are willing to pay a lot of money to be led up the mountains. How Everest is managed, descriptions of base camps, how Sherpa's play an important role in supporting climbers, death on the mountain, and even how removal of human waste is a big problem. All the practicalities are laid bare in the book.

I found it fascinating, the book itself is an inspiration, and I would recommend it for a good dose of  tell it like it is reading.

Kenton's trek to Base Camp


If you have 30 minutes to spare take a look at this motivational speech. I haven't time to watch it all now, I'll watch later.


I have much to do today, so I'll get off me bum and start by taking Bailey for a walk, then to the vet to pick up Heidi's tablets, then another Bailey walk, then books to go back to the library, then my last three mile walk of the month. That's my day mapped out.

Thanks for popping in, we'll catch up soon.
Toodle pip
Posted by Meanqueen at 08:53