Head in the clouds 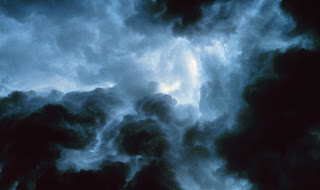 Oh wow, what a dream that was. I woke up thinking I had been in a disaster movie. Do you ever have dreams like that? Like you have been on a long journey and it took all night, but in reality the dream probably lasted only a few seconds. I don't dream very often but when I do it is of epic proportions, and so vivid in my mind. I have usually forgotten all about it half an hour after waking, so I'm sat in bed recording my dream here before it is lost from my head forever.

The most scary thing about this dream is the fact that there is no way that I could have known about the scene I saw. There was nothing in my head which could have prompted my memory to kick in, nothing to remind me that I have seen something similar in real life. Where it came from I do not know.

It has happened before, I dream about the future, about how the world might be in a hundred or a thousand years time. I don't watch science fiction films, but I find myself in places I percieve as the future. Last night I was in a tall building looking out over a city. A short distance away was a building of a similar height. It had like a cone shaped top to it, with a shiny steel outer covering which wasn't one complete moulded piece, but panels welded together.

I could see right into the building, there was a middle aged man sat inside, at a control panel. He had lots of electronic equipment at his fingertips. Lots of switches and buttons, lots of screens and dials to monitor, a bit like an aircraft cockpit, only much bigger. The man wore a blue checked shirt, he was rugged and of chunky stature, his grey hair was cropped short.

As I was watching the steel cone there appeared to be fireworks coming from the top of it. Shooting up and out in all directions, not coloured but silver sparks against the darkened stormy sky. It looked spectacular and I was in awe of it's beauty. A storm had been raging, the wind was blowing the black clouds, they were swirling around the top of the city.

My eyes were transfixed on the steel cone, the noise of the wind grew louder, I felt a slight tremor as the building I was in seemed to waft a little with a particularly fierce gust. As I focussed on the steel panels I noticed one of them lift slightly, it was like the bolts that held it together were finally giving in to the force of the wind. First a corner lifted, then a whole panel was ripped off and went flying through the air. More panels came adrift, as the wind raged, exposing the man inside to the elements.

A few seconds later, the wind took complete control and ripped the whole cone from it's base. It toppled sideways and completely broke away from the main structure. The fireworks had not been fireworks at all, it was the movement of the steel surfaces together which had caused the sparks.

I saw the man, fire had broken out around him, he seemed calm, his hair had caught fire and he tried to put it out. Then his clothes caught fire, and the floor around him started to collapse. At that moment he realised that the end of his life was upon him as the flames were licking around his body. It was as if he accepted his fate. He said, 'If this is the end, then it's a good way to go'. Then the floor fell away below him and he disappeared into the bowels of the building.

Then I woke up. I go to some strange places in my dreams. I sometimes wonder if these dreams are premonitions of the future, or just a vivid imagination on my part. Who knows. There you go, I have recorded my dream in case someone in a billion years time is able to pluck my blog out of the cyber archives. The visitor from outer space will read it and think, aha, she was right. That's if they can understand English.
Toodle pip.

Email ThisBlogThis!Share to TwitterShare to FacebookShare to Pinterest
Labels: imagination, reflections on life