Hello. I've done my three mile walk early today, half of it was in the sunshine, and half in a hailstorm. It's brightened up a bit now, but it's bloomin cold outside. Once again I had a break at the halfway point, I had a coffee with my friend Paul, a catch up natter because we haven't seen each other for ages.
Someone commented on an article that my bananas were black and horrible. I don't think any of the photographs escaped scrutiny by the great British public, you can't hide anything from those eagle eyed lot. There was one that said I have a nice tiled floor in the kitchen. Hah, that's a laugh, it was the cheapest lino and it's about ten years old. It's easy to keep clean because I don't have an army of boots walking through here, just the patter of tiny pet feet. Another bright spark noticed that there were two small bottles of milk in my fridge, and why didn't I buy a larger one because it would be cheaper. Errrr, one of them was given to me, I didn't buy it. What a dumbo. Anyway, as you can see, the bananas are perfect ten days after the sell by date, and I have one left for tomorrow. On my breakfast cereal I have been using up some small bottles of Danone Actimel yogurt drink, bought from Morrisons on a yellow sticker. Eight in a pack, real price £2.75, I paid 35p, also ten days out of date. 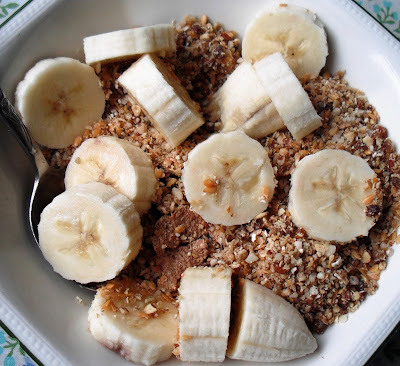 I have just eaten the last of the Avocado pears, I had eight in total, the single ones were 5p each, this was a pack of two for 18p, real Price £1.80. Still ok at ten days out of date. Some people might say that fresh fruit and veg loses some of it's nutritional value as it ages. I say I can't afford to pay £1.80 for two avocados, I will take a chance with these because it's better than not having any at all. 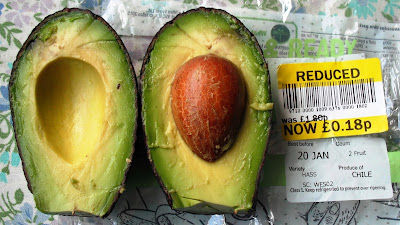 Bugsy's bed is just behind my chair, I sometimes put his food bowl in with him, dinner in bed, ha ha. Rocky has cottoned on to this and when he thinks I am not looking he sneakily helps himself. I have to laugh. Bugsy then starts meowing because his dinner has disappeared and he wants some more. Pets are funny. 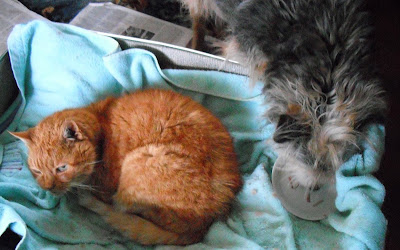 I woke up this morning with an idea for a craft project buzzing around in my head. I have two of these table lamps given to me by a friend, she was having a clear out and wanted them gone. I didn't particularly like them, they are rather large and I don't like the colours, but I thought I would find someone who did and pass them on. Sadly no takers, the next step is take them to a charity shop. But then I thought, wait a minute, I could change them using brighter colours, using maybe fabric or wool. Hmmmm, my little pea brain is mulling over the options. 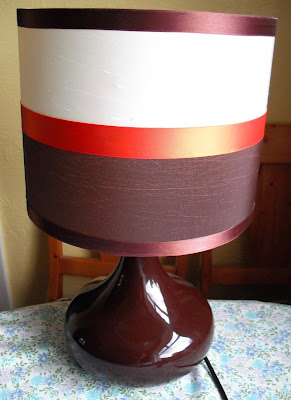 It's chuffin cold today, I will have to have a blast of heat soon. Dog wants to go out first, heat on when we come back. Hope you have a nice weekend. Thanks for popping in.
Toodle pip.
PS. Anyone seen anything about me in the Daily Mail today? If not it could be in tomorrows paper. I went and had a look in the newsagents but the magazine is in a sealed plastic bag so I couldn't look inside.

PPS. For those who haven't seen the Good Morning Britain video.