Hello. It's coming up to that time of the year again, when romance is in the air. Shops full of chocolates and  flowers, and big slushy cards declaring undying love. 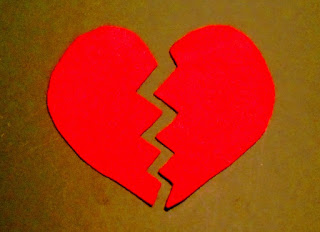 People getting engaged, people getting married, people with broken hearts because they found out love isn't all it's cracked up top be. People arguing, and getting divorced. Splitting it all up, going their own way, saying goodbye. Oh the turmoil of it all.

I've never been married, but I've gone through all the emotional stuff, falling head over heels for someone. Crying in my pillow because he didn't ask me out, how can I get his attention, surely he must notice how crazy I am about him. Nope, he didn't and I am left broken hearted. Never mind, I'll get over it, there will be another one come along shortly, and the whole performance will be acted out again.

Nowadays people seem to change their partners as often as they change their clothes. I was a terrible flirt when I was young, so desperate to bag a good looking guy. The competition was huge, lots of far better looking girls than me on the prowl, I didn't stand much chance. But I tried, I really did. I tarted myself up, put the slap on, skirt up to my bum, high heels, eyeing up all the talent.

I remember going to the 76 Club, before I was legally old enough to. I went with mates from work. One pretty girl was after the best looking lad, but I got lucky, he picked me, whoopeee. I felt like a film star, he chose me, I snogged his face off all night. It didn't last long though, he moved on to someone else and my heart was broken.

When I moved to Blackpool, I met a very sophisticated guy who was older than me and he had a car. He was not impressed when he found out I didn't have long hair, I wore a hairpiece and it fell off when I was a bit tiddly. I never saw him again. Another broken heart.

I tried my hardest to make myself look glamorous, spent hours getting ready to go out. The amount of times I got stood up, when the guy didn't show, and once again I went home in tears. I was Cinderella more times than I can remember. It was very painful when I had made so much effort, and no one noticed.

I had a boyfriend who was a lot younger than me, he chucked me because he didn't want his mates to see him with an older woman. I was so sad, because I really liked him. I had a boyfriend who was going to live with me, but he didn't, he let me down. I had a few trucker boyfriends, but it was hopeless trying to have relationships when I was out on the road all the time, and they were too, at the other end of the country. We used to see each other going in the opposite direction on the motorway, just a quick hello on the CB radio and that was it. Where will you be tonight, 'Rownham Services', oh,  'I'll be at Tebay'. See ya then, 10 10.

Mind you, sometimes it worked the other way round, someone would be completely smitten with me, but I didn't feel the same way about them. I even had a proposal but I felt I was too young to contemplate settling down with someone who was quite a bit older than me. He thought the world of me, but I could only see a life of domesticity, and I was enjoying my freedom.

A few years later I had a second proposal, from someone even older. Such a nice man, he was quite well off, I wouldn't have to work, could just ride around in his Range Rover all day. But I didn't feel the same way about him, and I was still enjoying my trucking and didn't want to give it up.

When I think of all the ups and downs of my love life over the past fifty years, I think I've done rather well to avoid getting married. I couldn't cope with all the emotional upheave of that, and later probably getting divorced. I am just not the marrying kind, I see it as jumping into a raging torrent and getting swept away in the wrong direction. There are marital problems everywhere you look, love isn't all sweetness and bliss, it can be painful. And I for one am happy with my pain free life. Those who are blissfully happy with their lifetime partner are lucky that it has worked for them. I am pleased for you, I like to see happy people. I like a good love story, but I am happy to stay on the outside looking in, I don't wish to join in.

So, don't ever try getting me fixed up with a fella, I just can't be bothered. I love my life exactly as it is, I've been there, done that with all the love stuff, don't need to repeat it. Happy Valentines Day, bah humbug, ha ha.

Thanks for popping in, we'll catch up soon.
Toodle pip.
Posted by Meanqueen at 21:08