Hello, is there anybody out there? It's gone awfully quiet in blogland this Bank Holiday Sunday. It's the tradition to go out somewhere, plenty of events to choose from, pictures in the paper of festivals, and all kinds of frivolities. This old bird prefers to stay at home though, prefers not to throw oneself into the chaos and confusion of motorway madness, and pushing through the throngs trying to get a glimpse of whatever visitor attraction has been chosen to visit. No Siree, I've been pottering around the village.
The party last night was a rip roaring success. A nice mix of people, a massive candle lit marquee in the garden, fairy lights dotted about, and a fantastic curry to tuck into, followed by some fancy posh ice cream. Very enjoyable to spend a couple of hours sipping wine and chatting with friendly folk. This kind of do is much more to my liking than going out clubbing and pubbing in town. It's nice to be with people you know and see around the village, more of a community spirit than getting blotto with a load of strangers. Not that I did get blotto of course. Mind you, I had a fuzzy head this morning, ha ha.
I picked up the stock from Sue's house and Janet's house, for the stand tomorrow at Epworth Show. It's all loaded in the car ready to get off early in the morning. I've put a couple of tables in there, we might be able to squeeze an extra one in depending on the space we are allocated. I have only paid for 6ft, but if they are not fully booked, we might be able to spread out over two pitches. We won't know till we get there, but it's best to be prepared. Of course, if all the space is taken we will have to fit into the standard pitch. 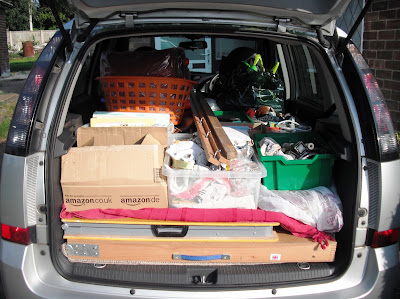 I won't bother photographing my dinner tonight, you know what a veggie stew looks like. I've just noticed that this meal, day one of a three day stew, has cost me virtually nothing. Potatoes, runner beans, and courgettes from the garden. A tin of sweetcorn from Helen's hamper, and for the seasoning I added a packet of spice mix that you are supposed to sprinkle on potato wedges when you cook them in the oven, also from the hamper. As you know I don't use my oven, so I thought this would work ok adding it to the stew. And it does. I also added a teaspoon of curry powder, three desertspoons of porridge oats, and a secret ingredient, a slug of port. No I didn't buy it, Helen found it in her drinks cupboard as she was sorting out some glasses for us to sell on the stand. She said it was left over from Christmas, and no one liked it. I must say, it perked the stew up no end. It's lipsmackin good.

I'm plodding on with the patchwork. I'm not calling it a quilt because I don't want to end up with a thick heavy piece that won't fit in the washing machine. It will have a backing and maybe something thin in the middle, more like a throw. I don't need a quilt, as in the winter I have two duvets on top of me, that's enough to keep me snug and warm.

I'm just off back in the kitchen to get seconds of this lovely stew, so I'll cut you loose. 10 10 till we do it again. You truck 'em steady now, I'll catch you tomorrow.
Toodle pip
Posted by Meanqueen at 19:26