Hello. I'm cheating today, Janet one of our cat rescuers has sent me details of our cats, so I'm doing a bit of copying and pasting. I know you like puddy tat stories.

EVIE
The tabby fluffy cat who was pulled from the fishing lake at, aged about eight weeks.  She was either very frightened or semi feral and wouldn't come out of her igloo. She is now very playful and let's you touch her nose although we haven't been able to stroke her yet and it will be a little while before she is ready for re-homing. She’s about fourteen weeks old now. Will be spayed when old enough. 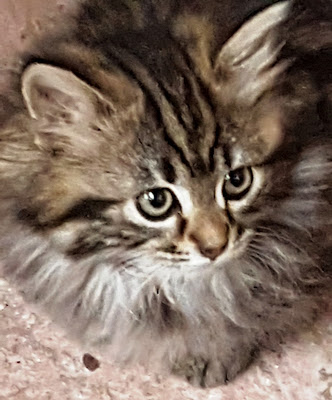 COSMO AND MOON
Came from a flat eviction with another cat called Percy who we had neutered and has now been re-homed.  Very timid when they came into rescue but are now happy, affectionate and very playful.  Cosmo had to be neutered but Moon had already been done. They are about two years old and are to be homed together as they are very loving towards each other. 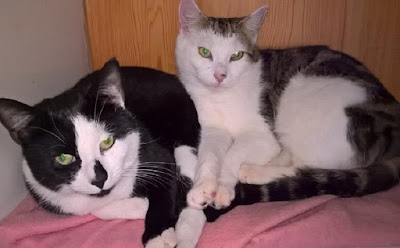 CARA
Cara’s family were moving to accommodation where they were not allowed to take Cara.  A lady they knew had promised to adopt her but backed out on the day the family were moving.  She came into rescue that evening very frightened and hid for a week in the igloo.  The last few days she has gained more confidence and is becoming very affectionate. She even allowed us to take the collar off her today. 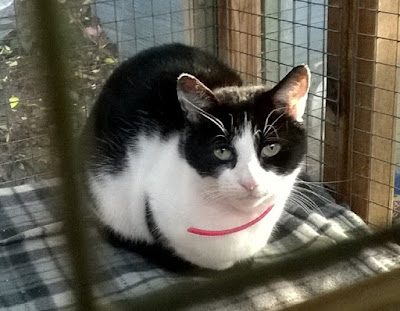 Thank you for that Janet. Our rehoming policy is that we don't let them go to homes near a busy road, or homes with small children. That may seem harsh but we get lots of requests to take in cats from families where the children have lost interest, or a baby is on the way and the cat no longer fits in. What we are looking for are forever homes, preferably in the countryside with space around them, where the new owner genuinely wants a companion for life. Each applicant is assessed on their individual circumstances, and new homes are checked.

Bugsy update. He has been eating, sometimes a lot, sometimes very little. He is still a bit picky with his food. Yesterday I warmed some cooked chicken for him but he wasn't interested. I left it out on his tray and he tucked into it overnight. I change his hot water bottles three times a day, he likes that and is now snoozing on them. Two normal poo's in 24 hours. Just a case of watching him.

Right, I'm going to get on with stuff, so I'll say tatty byes for now. We'll catch up soon. Thanks for popping in. Toodle pip
Posted by Meanqueen at 10:57