Hello, This is me on my last three mile walk which takes me to the magical number of 1000 miles. Yes, I've done it, and boy does it feel good. 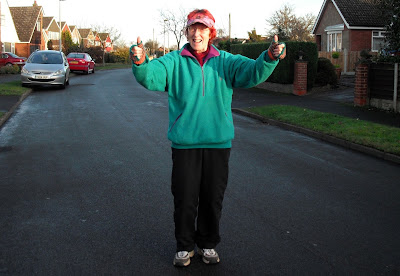 I was a year younger when I started, and felt pretty much ok then, and now I feel even better. It's right what they say, exercise is good for the body and the brain. 67 is just a number, I don't feel any different to when I was forty something. I want to continue feeling good so I will be carrying this on and starting again on Jan 1st 2017. I can feel the benefits, and I want to stay mobile. It would be such a shame to stop now, I will keep going.
This was my lunch yesterday, potatoes, watercress, and mushrooms. All yellow stickers. 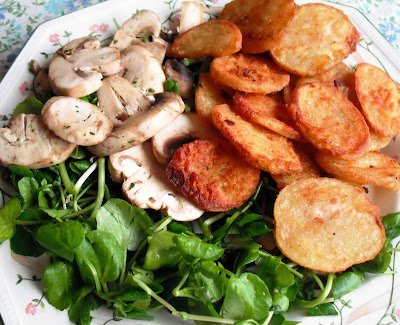 I cooked a pan of veggie stew yesterday, ate one portion for my dinner and froze three and a small portion. It was bloomin lovely, my secret ingredient is Danish Blue Cheese. 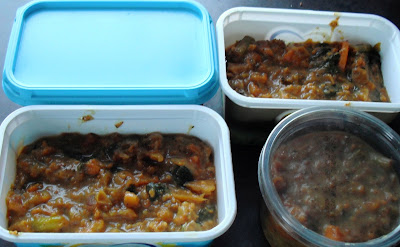 Tonight I have cooked another pan, eaten one, and there is some to freeze.

Bugsy update. A week ago I thought he was ready to keel over and die. He was scrawny and didn't have any interest in anything. He refused all the food I offered him. He had three injections from two vet visits, they didn't seem to make any difference. A day before I was due to take him back for blood tests he suddenly became interested in food. I had removed most of it as it became dry having been out for 24 hours, and replaced it with fresh out of the pouch. He was in it like a shot scoffing like he was starving, he almost was starving. Since then he has been eating small amounts regularly. When I come down in the morning he is sitting up asking for food. It seems his appetite has returned. Sometime he is picky and refuses what I am offering, but if I poke it around the bowl with a knife, tell him how lovely it is, and hold it under his nose he usually decides he will eat it. I'm completely baffled. So it seems we have a reprieve, how long for I don't know.

Thanks for popping in. Enjoy your Sunday. We'll catch up soon.
Toodle pip
Posted by Meanqueen at 20:09