The price of lurv

Good morning. Getting the blog post done early this morning, while it's still fresh in my mind, and before I get distracted and go off and do something else. Not a lot of yellow stickers to be had last night, just the luck of the draw, I suppose, you win some you lose some. I turned my attention to the Value labels instead, and stocked up on some of my store cupboard items. Rice pudding 12p a tin, lemon curd 22p, tinned spaghetti 19p, peanut butter 62p, tinned fruit 32p.
In the veg department I got big bag of carrots, white cabbage, butternut squash, mushrooms, and bananas. No cheap greens to be had :o(  Quite a lot of yellow stickers in the bakery department, but as my freezer is already full of bread, I only picked up one loaf for 15p. There were some treats on offer, so I thought it my duty to get a couple of packets, all in the name of research of course. I like to keep my readers informed of what not to buy, as well as pointing them in the direction of the bargains.
So what have we here. Four Boston Creme Doughnuts, covered in chocolate of some sort, probably not a lot of real chocolate in it, with a filling of some sweet sickly goo. Don't know why they are called Boston Doughnuts, probably wouldn't sell any if they were called Scunthorpe Doughnuts, ha ha. Look at the original price, two chuffin pounds for four. Chuffin heck, are some folks mad enough to pay that? Must be or they wouldn't make them. I don't mind paying 5p each for them. 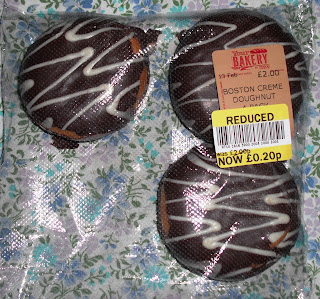 The price of these Chocolate and Orange Tarts is even more shocking. Two chuffin pounds for two chuffin tarts. Look at the trickery involved in the packaging. The tart is four inches in diameter, the paper tray is five inches across, what a sly trick, to give the impression you are getting something quite substantial for your money. Now after my taste session with these, I have to conclude that the pastry case is like hard sand, you have to be careful not to break your teeth when biting into it, and the choc filling although tastes chocolatey, is very sweet and sickly. The orange flavour is achieved by blobbing a dollop of posh orange jam on the top. Would you pay £2 for these, not on your nelly, ha ha. 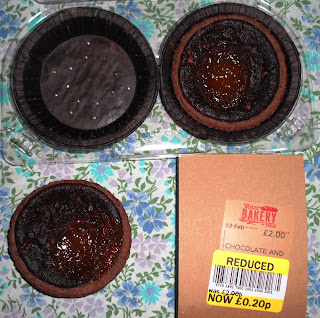 As I was going through the checkouts, a young man followed me through with a ginormous bunch of red roses, a pink heart shaped fluffy cushion, and a box of posh chocs. You couldn't help but notice the huge flower display which was 'in your face' at the entrance to the store. Me and the checkout lady was having a bit of a banter about prices, how they are going up, and going down in some cases. We engaged the shy young man in our conversations, me saying how nice it was to see someone getting a nice treat for his lady friend for Valentines Day, and he must be in love to spend so much money. The checkout lady pointed to the cost of the flowers as she put it through the scanner. Good grief, £30. I kept my thoughts to myself, he'll learn, ha ha.

Yes, it's St Valentines Day today. I won't know if I have a card till later, as the post doesn't arrive untill about 3pm. I won't hold my breath though, ha ha. I wonder if my troll will be back today to have a gloat, they have already called me a bag lady spinster. There's only one thing I can say to that comment, I won't die wondering, sunshine. Been there, done that, got the teashirt. This spinster has seen it all, ha ha. Not pandering to men's whims any more. Unless you get a good 'un, which is quite rare these days, I'd rather not bother, thank you very much, and just be happy that I have some friends, oh, and my cats are a good substitute.
Toodle pip.
Posted by Meanqueen at 10:57