An idea for recycling rubbish

It's a little bit brighter today, but still very windy and freezing cold. There's still some snow about but it isn't shifting because it's frozen solid, so I am staying indoors and getting on with the new artyfarty piece. I have started work on the smaller body panel, which is the same size as the yellow one. My ideas seem to change as I am progressing, I'm constantly thinking of ways to make it look better. Anyway, it's in the early stages, anything could happen.
First I want flowers, lots of them, so how to make them from scrap materials to keep to the idea of not spending any money on it. Using up what I already have. I have twelve flowers so far, I will leave it at this for now, I can always make more later if I haven't enough. 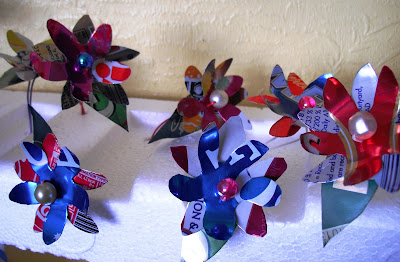 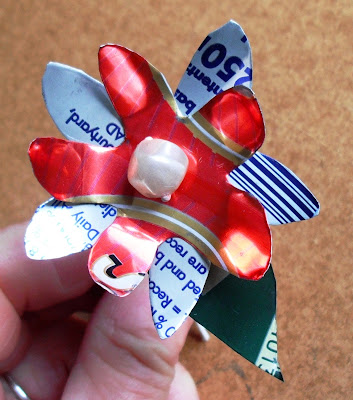 I thought I would do this mini tutorial in case you want to have a go and make some for yourself. They are very versatile and can be used to decorate lots of things. I have got short stalks on mine, but you could put long stalks on them, and make a fun flower arrangement in a vase.
You will need coloured drinks cans. Take the top and bottom off them with a pair of nail scissors. Stab the can close to the edge, and cut around the perimeter. You are left with a tube, cut it along the side close to the writing and bar code on the back, to save the most colourful parts for the flower. You can use all parts of it as I have done in the pic above, but put the coloured petals on top.
Then you need to draw your design on a piece of greaseproof or tracing paper. Make it thick and black. Flatten the can, you can roll it inside out so it isn't so curly but try not to crease it. I just hold it flat on the board while I transfer the petal design onto it with a pencil. Put some pressure on it while tracing round the petals so you can see a slight indentation when you come to cut the petals out. You will find the pencil lead easily comes off while you are working on it.
The other bits you will need are beads, and pieces of wire. You don't want the wire to be too thick because it has to go through the bead, and you don't want it to be too thin because your flower will be too floppy. I am using some plastic covered wire which I took out of a redundant video tape player. If you take old electricals apart, always look inside to see if there is anything which will be usefull for crafting work, before you take it to the dump. 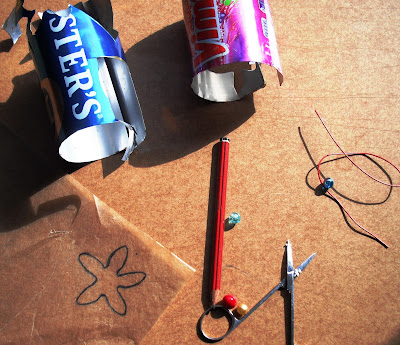 So, you want two sets of petals, I have made a leaf as well, one bead, and a piece of wire, (about six inches long). First thread the wire through the bead until it is dead centre. Bend the wire so the bead doesn't move. Put one of the petals on top of the other, flat on the board, and pierce two holes in the centre with the scissors, about the width of the bead. Make the holes the exact size for the wire you are using so it is a tight fit. Thread the petals onto the wire, and pull tight. If you add a leaf, make two holes in that and thread it on under the petals. I have given the wire a twist underneath to hold it in place, but I am going to pull my stalks all the way through the plastic car body panel and fasten them to the underside so they won't be seen. 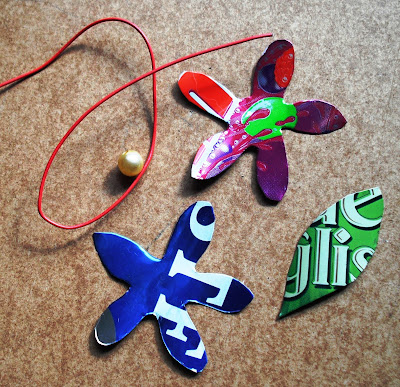 Lastly, pinch the top petals with your thumb and first finger, pull and bend slightly upwards. Careful don't cut yourself the edges are sharp. 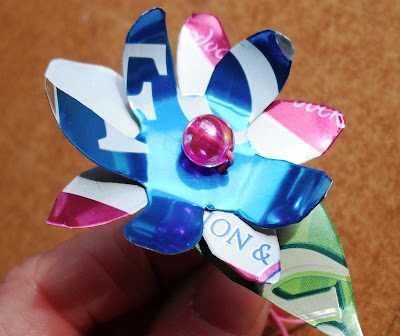 If you want longer stalks on them you can put the bead more towards one end of the wire, and twist the shorter piece around the longer stalk, just below the flower so it is hidden. You might need to experiment with different thicknesses of wire, to see which is best to support the flower. You could do as I have done and make both pieces of wire the same length and bind them together to make them more rigid.
Anyway, that's the basics, enjoy your playing around, and if you already have the bits and bobs, it won't cost you anything. Free entertainment. can't be bad.
Enjoy the rest of your Sunday. Toodle pip.
Posted by Meanqueen at 12:57