Hello. Thank you all for your comments yesterday, it's comforting to know that there are so many kind hearted people who understand. When Rocky has a sad day it makes me sad too. I think, is it too much for him, is now the time? He can still walk about, we go into the garden, but don't go any further. He does his toilet, everything is working ok.
Rocky has had a good day today so I'm feeling a bit better. He was up early wanting to go outside. I have moved his food and water into the living room so he doesn't have to go to the kitchen for it. The hard lino floor in there is too slippery for him, he walks much easier on the carpet. Today he was keen to eat. I think it was the heat over the last few days that he was struggling with. I have given him a hair cut, and I put a fan heater set to cold near him to help cool him down. It hasn't been so hot today so I think he is back to normal now. 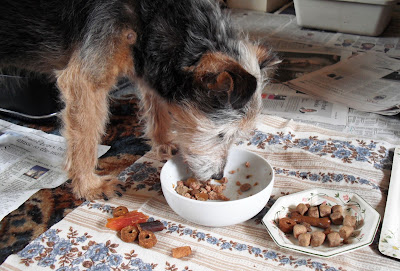 It looks a bit messy in here. Bugsy's litter box is in the corner, there are newspapers around Bugsy's bed because he has been known to be sick sometimes. This morning he scoffed his food down far too quick and it was lucky I was sitting here, because immediately the wretching started  I jumped up and held him still over a few sheets of newspapers while it all came up. After that he went back to bed for a couple of hours before he asked for more food. Bugsy tends to eat more during the night so I always put some in his bowl before I go to bed.
A redundant Pyrex casserole dish is re purposed for a dogs water bowl. Old curtain on the floor to catch the splashes and dribbles. 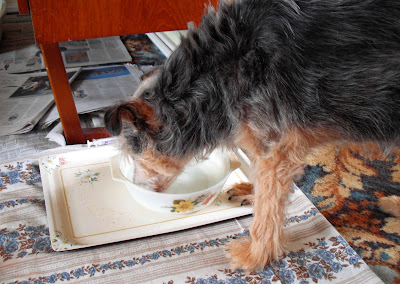 I've kept myself busy working on the picture, and now it is finished. I'm very pleased with it. I had a frame in mind but now I find that the glass has a long scratch in the middle, so it's either get a new piece of glass, or look for another frame at the car boot sale on Sunday. Probably more cost effective to get a cheap frame and buy it for the glass.

We're supposed to be getting some thunderstorms, so I don't know whether to water the flowers or not in case it chucks it down during the night. The ground was slightly damp this morning so there was a sprinkling last night. I've had a man round to clean the gutters out. There wasn't much debris, but a down pipe was blocked. Should be alright now.

Bugsy is next to me scoffing like there is no tomorrow, I gave him a small portion so it should be alright. Lucky so far, nothing coming up. He's looking for more, but he isn't getting any. He's now washing his face. The sun is going down so I'm off out.

Thanks for popping in. Have a nice weekend. We'll catch up soon.
Toodle pip
Posted by Meanqueen at 20:16