Hello. I didn't have a very good night, my cold got worse, throat was sore, and I couldn't stop coughing. On top of that, the nose was running like a tap. I wondered whether to carry on, but I thought things would improve once I got some lung fulls of cold fresh air inside me.
It was drizzly rain when I set off at 9.30am, and I had to get the brolly out when it came down a bit heavier. The forecast said it wouldn't last so I wasn't too bothered. It was a bit cold though. I had it in mind to go straight across on minor roads, the footpaths over fields would have been very boggy. I was heading for Howden, I could probably get a bed there, or a bit further on at Eastrington.
If anyone is following my route, I went through Hillam, Gateforth, West Haddlesey, Chapel Haddlesey, Temple Hirst, Hirst Courtney, Carlton, then Newland. I was coughing and filling up a wad of tissues with my germs, all the way. I reckon I might have got this from a lad who was on the train just across the gangway from me. He coughed a lot. I never get a cold.
There wasn't much of interest to take photo's of, so the camera stayed in my pocket. I like the way they have made good use of this redundant phone box. A mini library, the books were all good quality. 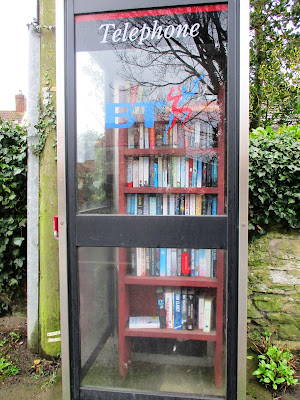 The landscape is not very interesting in these parts, acres and acres of flat agricultural land, mostly ploughed fields at this time of the year till the crop growing season starts. 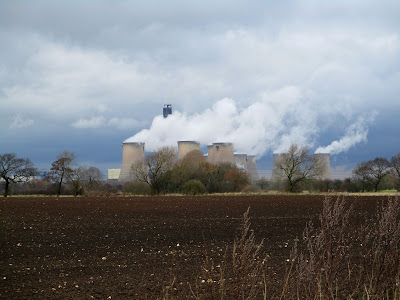 I stopped for a bite to eat at a childrens play ground, I remember sitting on the bench there before when I was walking in these parts. It got to about 2.30pm and I was getting tired, it was becoming a drudge, and I was not enjoying it. All of a sudden I decided to go home, but I was in the middle of no-where and it was going to take me another hour and a half to get to either Howden, or Goole, where I would seek out public transport.

I sent a 'help', text to Janet to ask her to look up train and bus times out of these two places. She rang me back with a couple of alternatives, depending on what time I could get to these places. I thought I was on target to make the 4pm train at Goole, if not then definitely the 5 o clock.

About ten minutes later I arrived at a junction and needed to cross the River Aire. I had walked into a dead end and was trapped. Where I thought there was a crossing, there wasn't, oh no. There is a corner between the Ouse and the Aire where there is no way out apart from a massive detour. Not too bad in a car, but my feet were not going to make it. I decided to knock on a door to ask for advice about what to do, which was the best way to go.

A man came out and he said it would be unwise to scramble up a bank and continue along a busy elevated road with fast moving traffic. I was desperate to get to the station at Goole so I thought I would take a chance. Then completely out of the blue the kindly man offered to take me to the outskirts of Goole in his car. By this time I had had enough of walking with sore feet, and coughing my heart out, so I accepted the lift. It was quite a distance, I would never have made it and would be stuck with no-where to sleep.

What a star eh! We chatted like we were old buddies, it goes to show there are some decent kind people out there willing to help. So, if you are reading this Stuart, thank you for the lift, it was very much appreciated. I got the 4pm train, changed at Doncaster, and arrived in Scunthorpe at 5pm. Lovely friend and cat sitter Janet was there to pick me up. What do you think Puddy Tat, that was one hell of an adventure wasn't it. Are you glad to be going home. By the way, Stuart is a cat person, which makes him a good guy in my books. 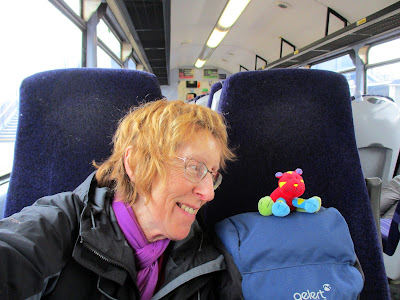 I walked 15 miles today, making a grand total of 110 over six days. I think that's quite good. Now I rest.

Thanks for popping in, we'll catch up soon.
Toodle pip
Posted by Meanqueen at 20:35