Come into my boudoir

Aye up me ducks, a man with a white beard dropped by last night, a Mr Claus I believe his name is. He pulled up right outside my house so I gave him a wave. He didn't have time to come in and was soon on his way. The street was filled with Christmas music, and his little helpers were running about with buckets collecting money for local good causes. The Rotary Club do this every year around the villages, and the kids love it. 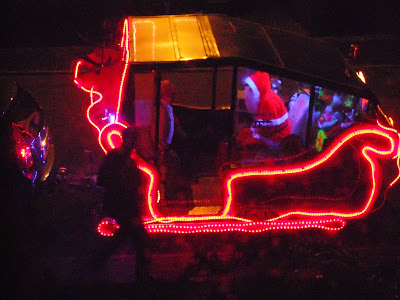 Here is a peek at the latest patchwork thingy, using up all the bits. There are four 24inch blocks here, not yet joined together, that will be the next job. I think I'm going to have to carry on and make more, it's not big enough yet. I'm just wondering if I can carry my sewing machine to the craft club tomorrow so I can start on another block. If not I'll have to find something else to take. It's got a carrying handle and it's not too heavy, might try that. 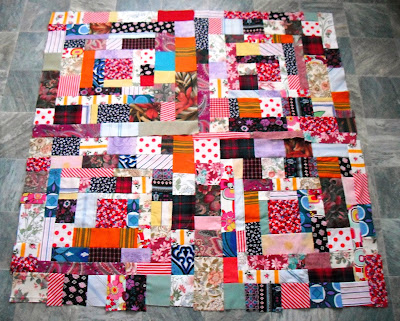 Sandie and annie asked to see the new curtains, with the quilt and rag rug together. Very difficult to get all of it in the one photo, but I think you get the idea from this. I woke up this morning feeling cheerful, it's amazing what a splash of colour can do. 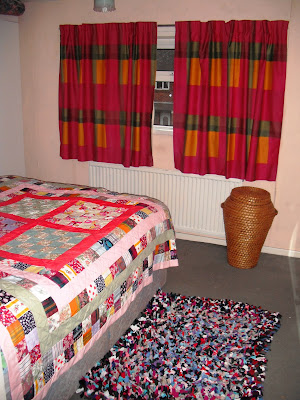 I did a quick dash to Tesco at 3pm today. Not that I needed any food, but to get some chicken, and some posh cat food for Bugsy. The greatest cat in the world, my dear beloved Bugsy is not very well. He didn't eat anything this morning, pushed his food around the dish, and went back to bed. I eventually got him to eat something just before I went out. I need to monitor him now over the next few days. He is not a happy chappie, I fear the outcome will not be good.

I did manage to bag some yellow stickers while I was there. Loads of salady stuff, spinach 10p, lettuce10p, couscous 35p, pasta 13p, and dips 22p, and fresh pineapple 10p. I already had cauliflower, carrots, and broccoli, bought at Asda on Friday. My dinner tonight, steamed veg and couscous. Mighty nice. 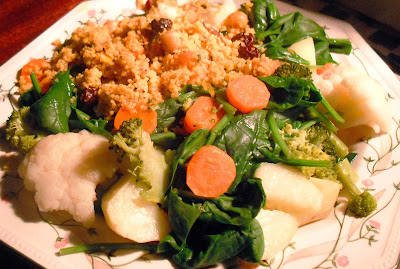 Did you see the sunset tonight? I pulled in at a good high spot to watch it, on the way back from Tesco, wasn't it just glorious. I had only been there two minutes when a car pulled up alongside me. The local bobbies had stopped to see why I was parked there. I opened my window and called across to them, look at that wonderful sunset. They agreed, it was nice. I wondered how old they were, one male one female, only looked about 15 years old. I was bloomin annoyed that I didn't have my camera with me. I was cursing. If it happens again tomorrow night I'm going to get in my car and go back to that same spot. With the lights of the industrial estate in the foreground, and the wind turbines in the background, it was an amazing sight. Talking of turbines, they seem to springing up all around us here. I didn't realise we were going to get that many. Shows how much notice I take of the local press.
That's it for now. Don't get your knickers in a twist over Christmas, just forget about it. It's only one day, it will soon pass. Toodle pip.
Posted by Meanqueen at 19:13