How do you like your coffee, white or black?

Howdy. Me again. You probably guessed it was me, not that there is anyone else here, and Nellie is no where to be seen. The camera came with me to the craft club this morning, and I took a few snaps of these lovely cushion covers. The lady who brought them made them quite a long time ago, she was looking through a book to find the instructions because she wants to make some more, and can't remember how she did them.  Aren't they just fabby. They look very complicated to make, I certainly couldn't work it out. 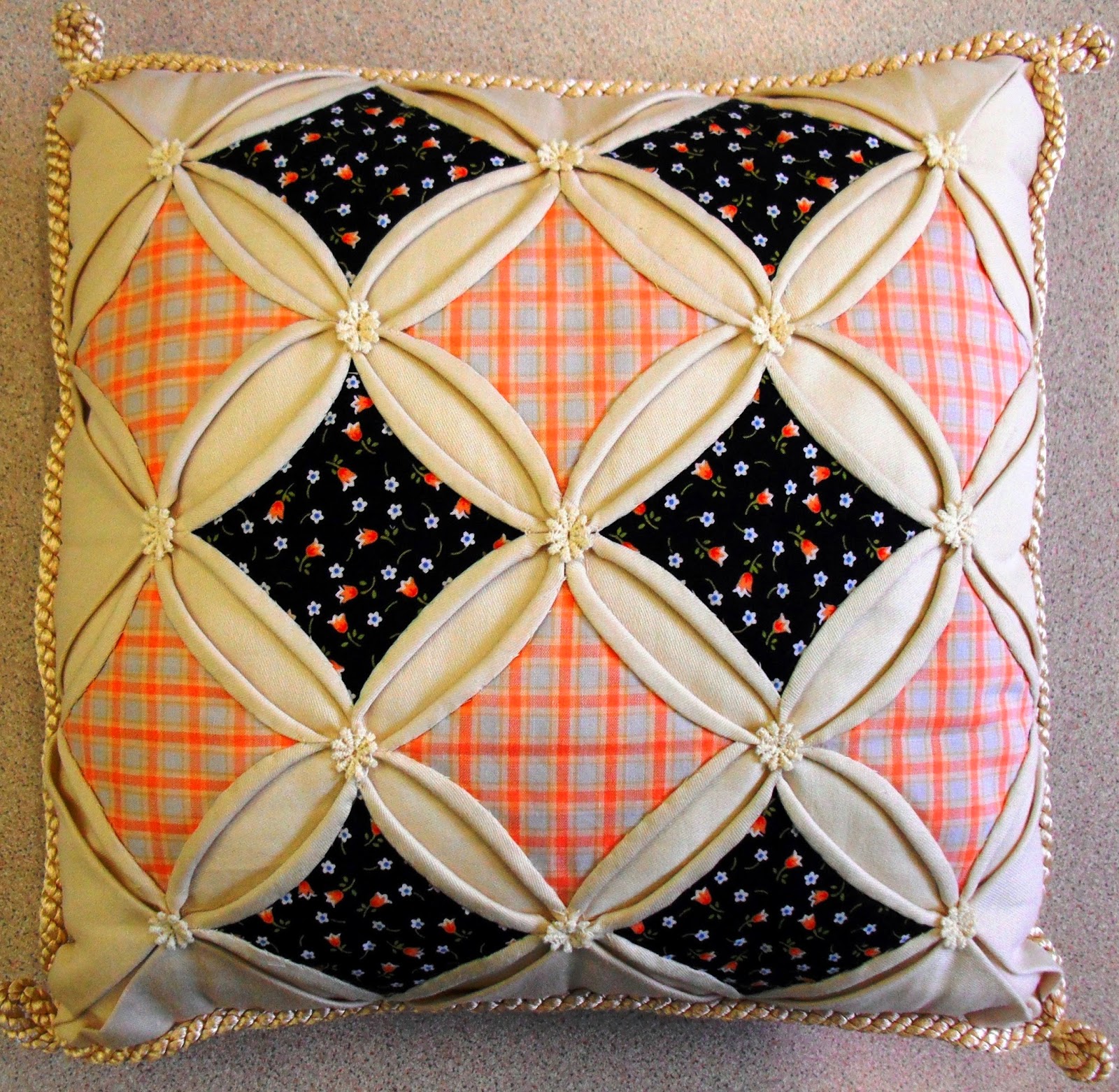 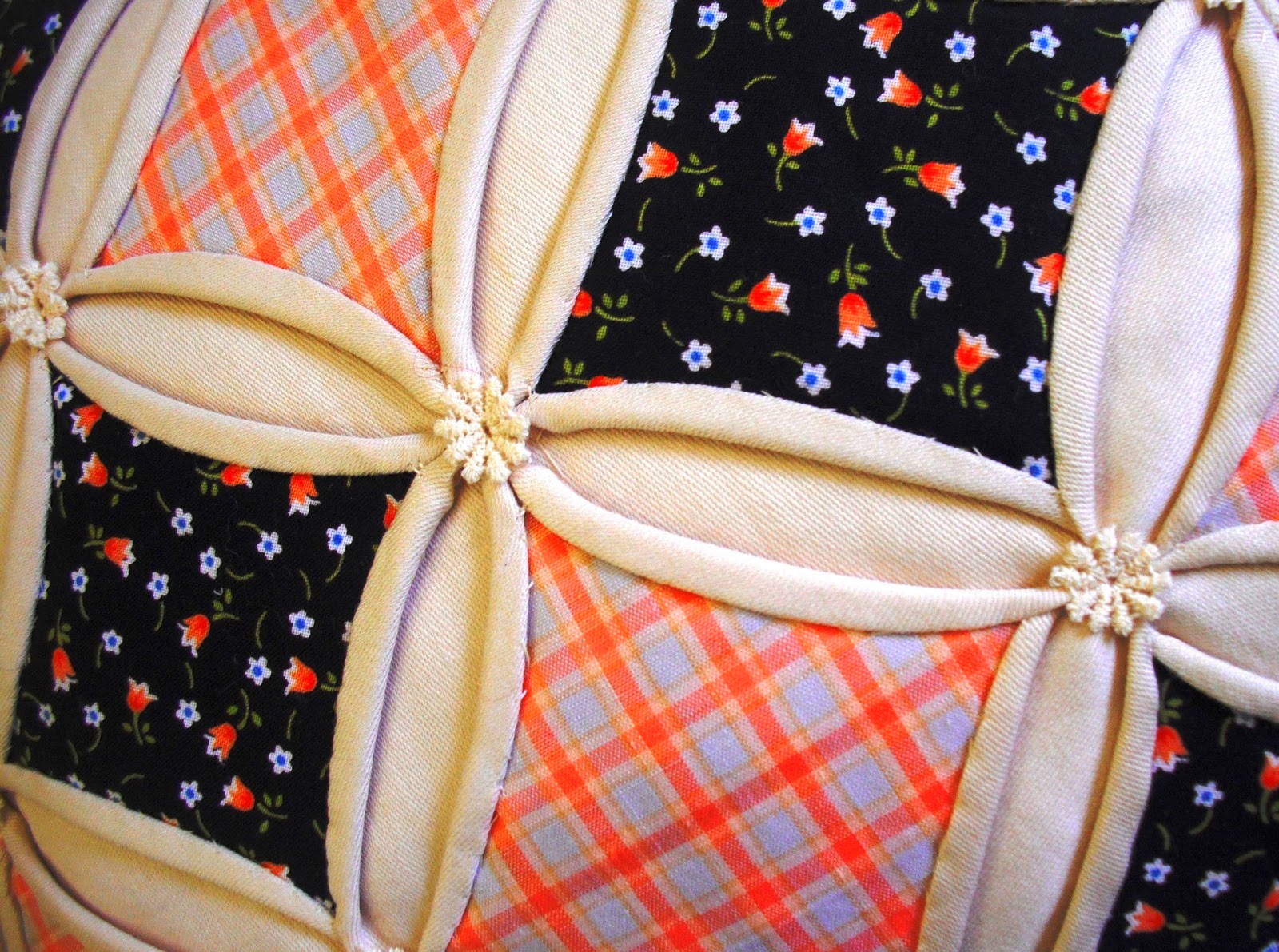 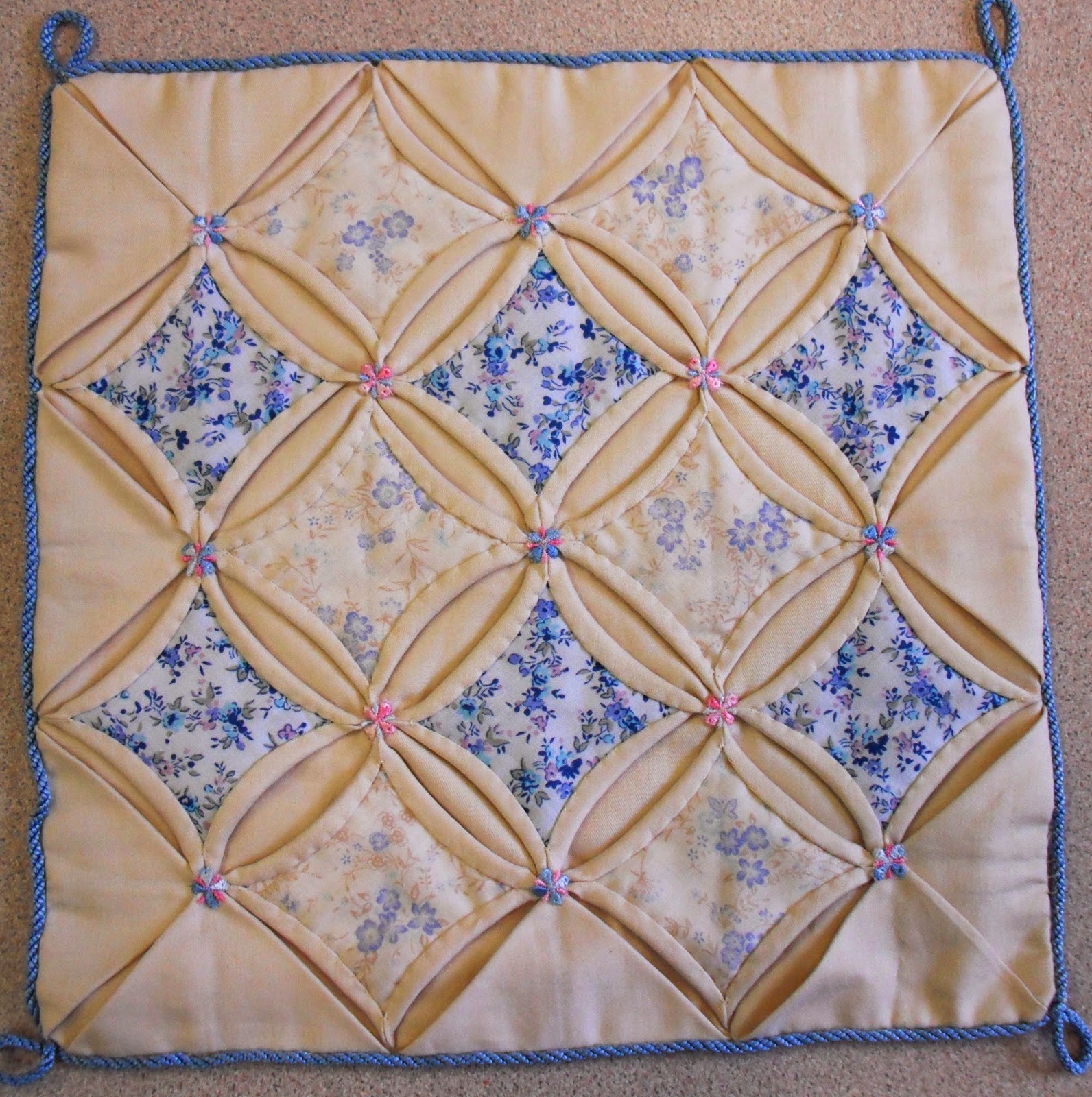 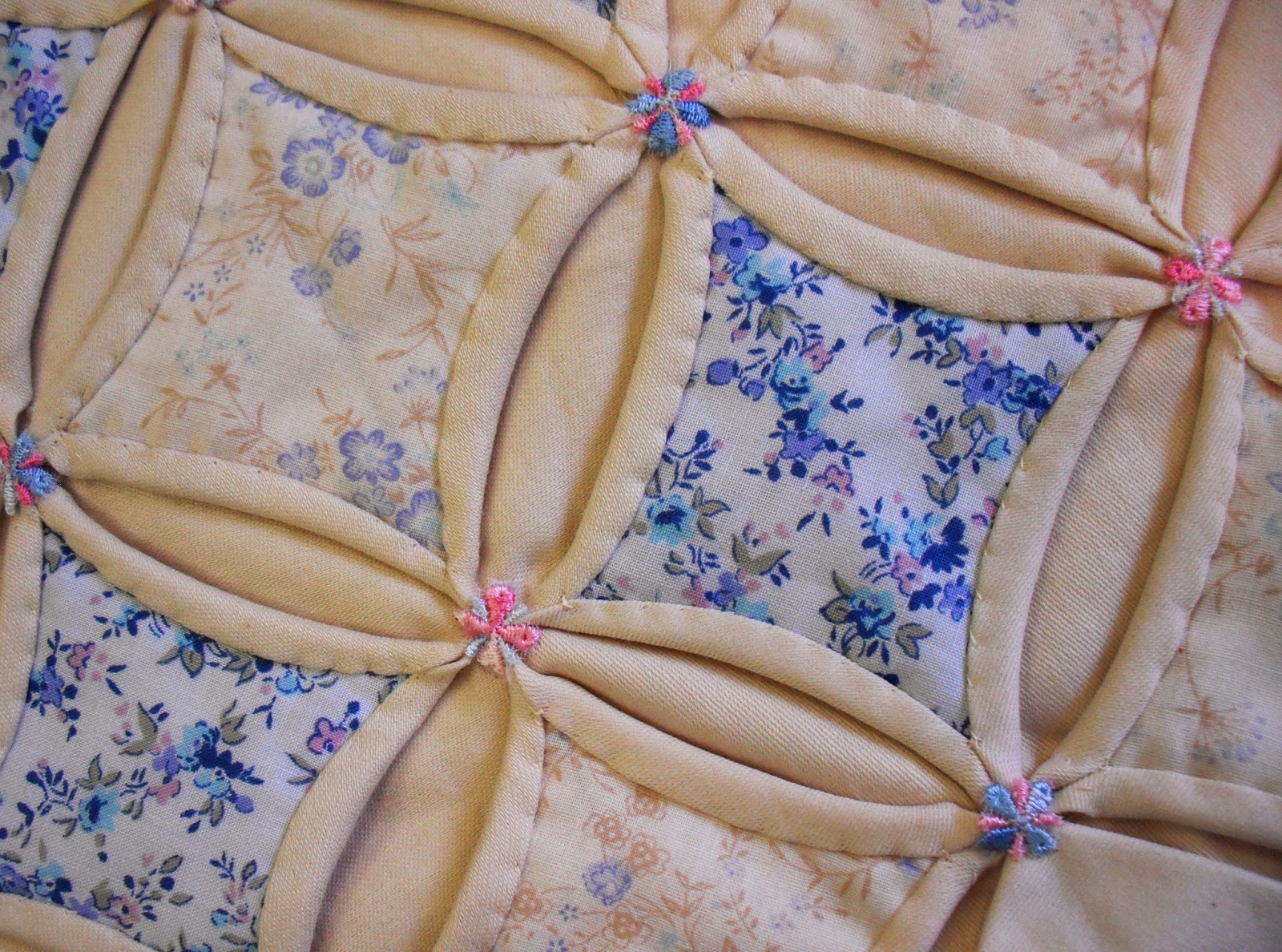 This afternoon I went to do a bit more gardening at Helen's house. Clearing rubble away and straightening some paving slabs up which were out of line. Heavy work, got me quite a sweat on. Afterwards I did my usual call in at Tesco, and Spar shop. Gave the Co op a miss, I've got plenty of food in at the moment. This yellow sticker hunt is becoming quite addictive. So what did I get. Greek yogurt down from £1.89 to 62p. Coleslaw, 67p reduced to 30p. Spinach £1 to 41p. Two packets of Welsh cakes were £1.75p each, reduced to 20p each. They are a bit like Eccles cakes. A cauliflower, was £1.16, now 60p. I am up to my eyeballs in yogurt now, got to get some eaten.

I had a nice surprise when I went in the Spar shop. As I handed my 40p over to pay for the Welsh cakes I mentioned that I like their reduced stickers. The young man at the till said, 'so do I', he said 'I try and live only on reduced food'. I was amazed, here is a young man with his head screwed on the right way. We then had a conversation about living within your means. Usually young people haven't got a clue what I am talking about, but this chappie was as enthusiastic about finding bargains as I am. He was like a younger version of me, ha ha.

I did an experiment, how many mugs of white coffee do I get out of  a 500grm carton of Coffee Mate? It says on the side that you should put two teaspoons in a mug, I say that is too much, I put one teaspoon in. Using this is by far one of the cheapest ways of whitening coffee. I counted out 118 teaspoons. And of course it has a long date on it so it will last ages.

I have been using this for many years. I tried the cheaper versions of dried milk but didn't like them, they go lumpy when you mix it with water. Coffee Mate has a nice taste and stirs in evenly with no lumps. I also put a  small spoonful in the water when I cook my porridge in the mornings, makes it creamy. Give it a try if your milk goes off before you get round to finishing the bottle. 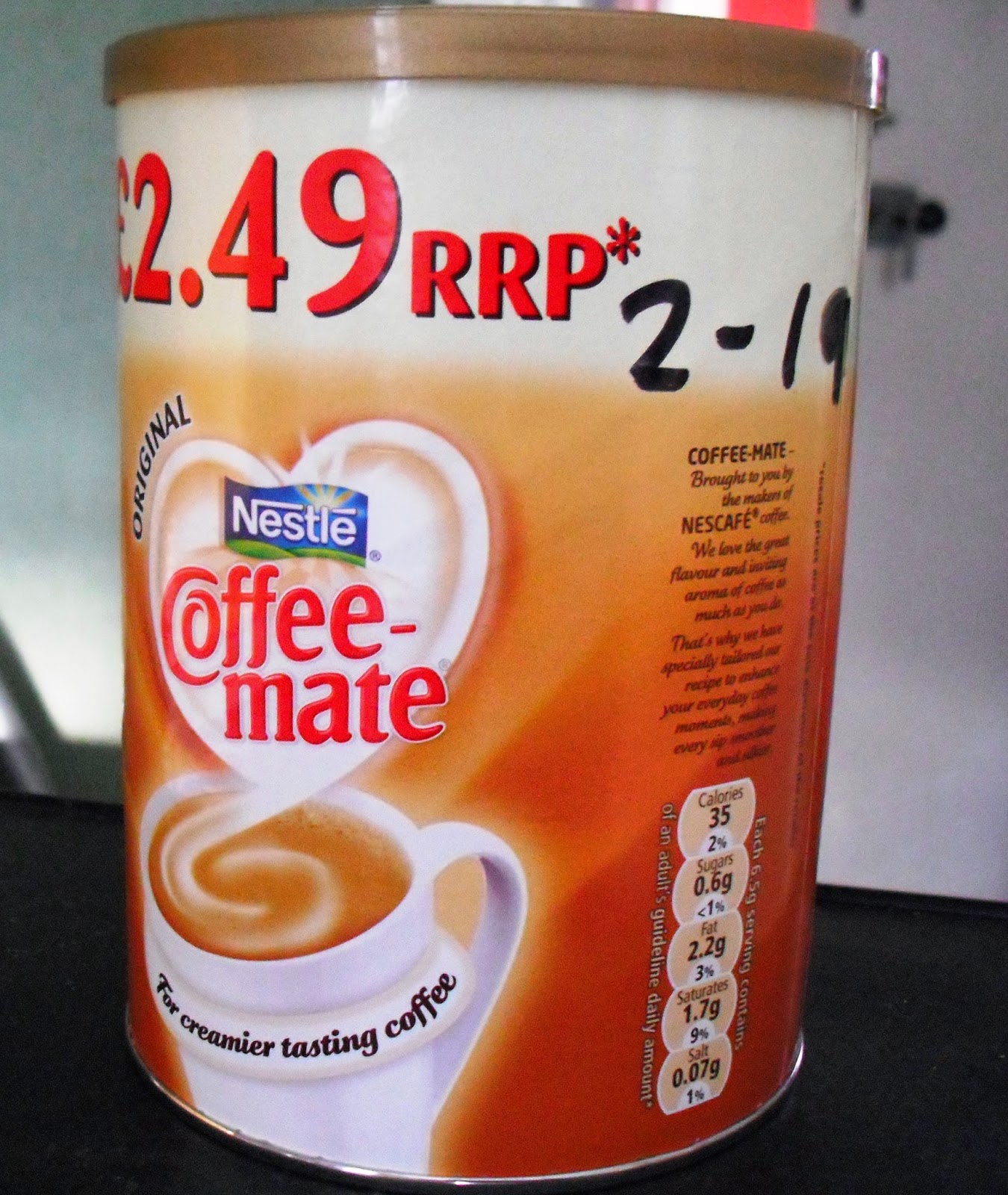 I'm getting some very nice emails from my readers, thank you for taking the time to write to me. And thank you for the free coffee you sent. I'm chuffed.

Talking of spinach, howzabout a bit of Popeye. Rememmber him? From 1948, a year before I was born.

Catch you tomorrow.
Posted by Meanqueen at 22:19