Birthday plans, a surprise parcel, and a singalong with The Seekers

Hello from a chilly North Lincolnshire. By 'eck it's been cold here today, brass monkey weather by all accounts. Time to wrap up. I had a quick trip to town this morning, I've been meaning to buy a ticket for a show at the Baths Hall in May, and after checking their web site again and seeing how fast they are selling, I thought I'd better make a purchase sharpish. I could have done it over the phone with a credit card, but that would have cost me an extra £2, so I decided to go there and hand the cash over the counter.
I parked at Sainsbury's opposite because the plan was to combine the journey with stocking up on cat litter, that one bag I bought at Aldi isn't going to last long. The Baths Hall was closed, chuffin heck. A sign on the door said tickets are for sale at The Plowright Theatre. Back to the car park and into Sainsbury's. Not having much luck, clumping cat litter at £1.55, out of stock. That's another chuffin heck. I got in the car and drove to the Plowright, not far, and bought my ticket, not many left on the front row, my favourite seats. Then I drove to Tesco and picked up eight bags of cat litter and a bottle of wine, a nice treat for me.
The show I'm going to see is Men of Steel - A Massed Male Voice Choir with Lesley Garrett. The blurb says, 25 years ago the Scunthorpe Male Voice Choir pulled together male voice choirs from all the major steel making areas of Northern England to sing in a 200 men massed concert. And now they are doing it again next year, sounds pretty fantastic, I shall enjoy that. The date is five days after my birthday, so I have decided I am going to celebrate over the whole five days and find something to do every day. Whooohooo, that should be fun.
This afternoon a parcel arrived for me, a surprise, I wasn't expecting anything. Inside it was a mixed box of crafting supplies, wool, fabric, etc, and also a gift for Rocky. Here he is in his new lead with matching collar, and doesn't he look a cool dude with his bandana round his neck. Thank you so much to the mysterious sender of this gift. There was a note but I'm not sure which kind reader sent it. A lovely thought. 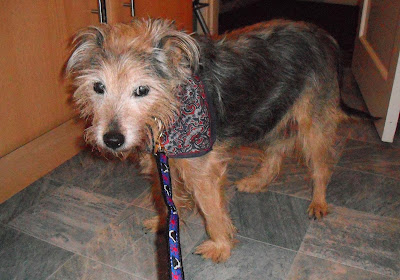 I've had a lovely afternoon. I collected the free newpapers from my friend, Rocky came with me. I've been scoffing veggie stew, and slurping the chardonnay, I've even gone a bit bonkers and put the central heating on. YAY, it still works after not being turned on since February. Some crafting has been done, and a long conversation with my best friend on the phone. Yoootooob has provided me with entertainment, Judith Durham and the Seekers have been revisited. Hasn't she got a beautiful voice. She is now 72, and the most recent video I can find was from last year, the quality isn't so good so here is one from 2010. Their music is just as good now as it was 50 years ago. Hope you enjoy it.

Thank you for popping in. Catch you soon. Toodle pip
Posted by Meanqueen at 21:15