Hello. It was my lucky day yesterday. What is better than reduced yellow sticker bananas? Free bananas of course. Yes, I got five free bananas. I was walking up the High Street and paused to read the notices in the village shop window. The door opened and the owner stepped outside with the said bananas. She was about to throw them in the bin  when she hesitated and asked if I wanted them. I was amazed that she was going to chuck them, the only thing wrong with them was the skins had started to darken a little. I gratefully accepted, and was chuffed that I was there at that moment. One eaten, four to go. 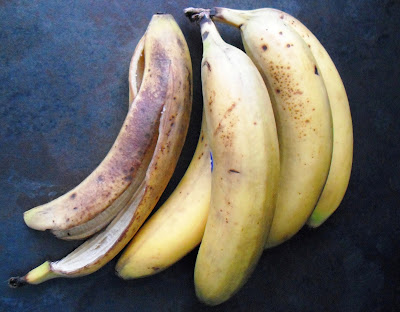 This is a second hand house brick. I have been looking for some of these for a month or two. At a guess  about 200 would do the job I have in mind. Another stroke of luck yesterday. The house opposite has been undergoing a renovation, it's taking ages because there's only a couple of workers on the job. The front looks pretty much finished and now they are starting on the back garden. A skip has appeared and I asked the owner who is supervising the work if he was chucking out any bricks. He said he was, but they were mostly broken as they took a wall out with a jack hammer.

I could see the skip filling up so I had a nosy what was in it. Some of the bricks looked fine to me, a bit chipped, and caked in cement, but that would come off with a hammer. I had a word with the man working there and he said take what you want. So I did. I took my wheelbarrow and cleaned the bricks up before I loaded them in. 20 bricks are a bit heavy to push along but I only had to cross the road and take them to my back garden. 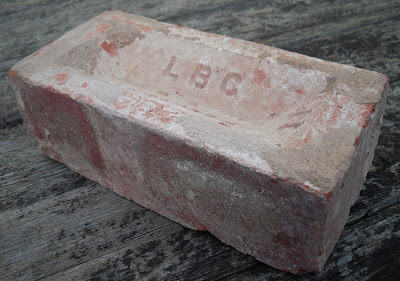 I ran out of daylight yesterday so I went back this morning and got some more. 77 so far, and the man showed me another pile which I can have, he will get his mate to bring them to the front tomorrow. They are taking out an ordinary window and putting in patio doors, so all the bricks below the window have to be removed. Lucky me that I don't have to transport them far, and they are free. Just think, they are about 60 years old, and I am going to use them again. Good bit of recycling there, Hugh would be proud. 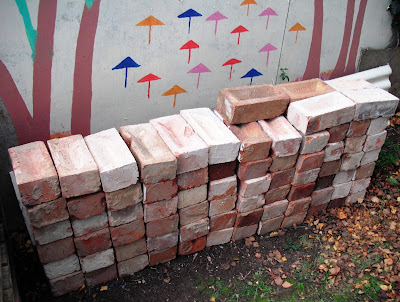 This is what I am going to do with them. The pallets around my raised beds are rotting so I am going to take them out and replace them with bricks. I want to make the beds smaller and sow grass seeds between them so I can get the mower around them. At the moment they are too close together. Then I'm going to plant them up with flowers and shrubs which the slugs don't like. It will make a nice view from the summerhouse. 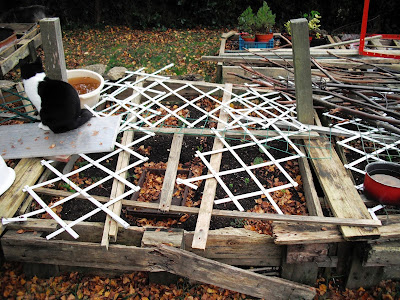 I ran up a couple of shopping bags today, these are particularly suitable for the male fraternity. 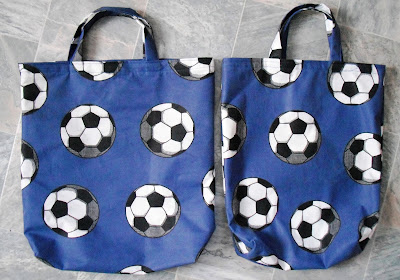 Have guess what these are? No they are not pasties, not even pastry of any kind, nor pasta, in fact not edible at all. I took these shoulder pads out of a garment I bought at a charity shop. As the plan was to cut it up, I didn't need the pads, but what to do with them. I put them with the cleaning materials under the sink, and today I had an idea, I could use them for washing up, instead of a cloth. And it works. They are just the right size to swish around inside pots and pans, and they easily wring out with one hand. Useful for cleaning inside the microwave, and wiping down the top of the cooker. Give it a try if you have any from redundant clothing. 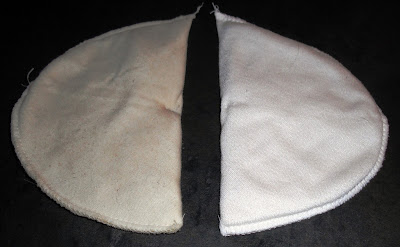 It's been a lovely day today, I had a line of washing blowing in the sunshine, and I got the mower out and went over the back lawn picking up all the fallen leaves. More bricks to collect tomorrow, yippeeeee, then I can get on with the job.

Thanks for popping in. Catch you soon. Toodle pip
Posted by Meanqueen at 18:55