I like taking things apart to see what's inside them and how they work. You never know what you might find, something interesting perhaps, something that can be used to make something else, or not very much at all that perhaps needs dumping. Anyway, it's a good idea to at least look before you chuck. Take this airbed for instance, it's very old, I have slept on it many times, it's been handy for camping, and using as a spare bed. But now it has an air leak somewhere and I can't find it.  It's a bit manky, and it takes ages to blow up, so I think the time has come to either chuck it or give it another life. It is made out of a heavy, waterproof fabric, red on one side..... 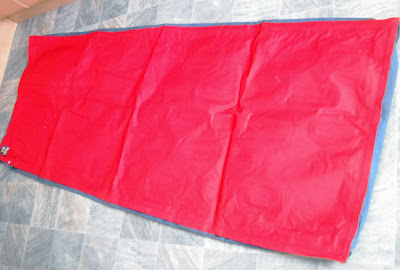 and blue on the other. By an amazing coincidence it is exactly the same as the brand new never been used one, I got out of the skip last week. 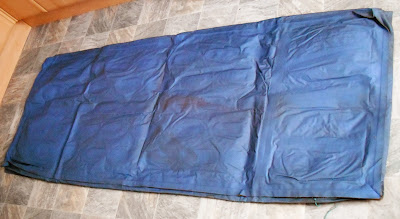 After attacking it with a large sharp pair of scissors, I separated the two sides by cutting around the edge, to find them internally joined with lots of small pieces of stuck on fabric. They needed cutting apart and all these tags could be pulled off, like removing plasters. 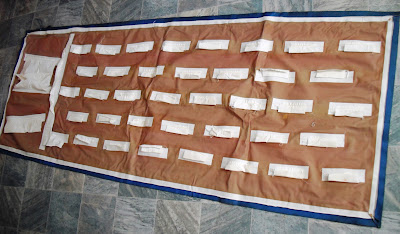 I was hoping to add more pictures to show what I am doing with it, but I am a bit behind as things keep cropping up which need my attention. Jobs need doing, but I am beavering away and hopefully soon I will have something to show.

I was talking to a man today who lives at the other end of the village, I have spoken to him before. He had done some tree lopping and was clearing away the debris. Me being nosey I asked him what other jobs he could do. Oh, a bit of plumbing, a bit of decorating, assembling flat packs, cleaning gutters. That's interesting I thought, my gutters need cleaning. In fact he could be a useful bloke to know, for any other jobs that might crop up which I can't manage myself. Anyway, he is going to come and do my gutters sometime in the next week. If I had the right ladders I might attempt the job myself, but his quote is fair, so I'll take the easy option.

I really must get my spuds dug up now. We had a frost last night, must do that tomorrow. There are jobs that need doing in the garden, the runner bean poles need dismantling and removing and storing in the garage. A couple of the veg beds need digging over, but I have been putting it off because a frog lives in them. I have brought the three massive money plants inside now before the frost kills them, so I need to make room for them somewhere inside the house. I need to take stuff to the charity shop. I need to do lots of things. Not enough hours in the day. I need to eat something now.
Toodle pip.
Posted by Meanqueen at 21:20