The house of make do and mend.

In my quest to spend as little money as possible on house and garden stuff, I am always looking for ways to cut corners, to problem solve by using given and found things, and not running to a shop every five minutes to buy what I could make. So here is a little project I knocked together which didn't cost a bean.
First of all I needed a plastic tray which would not deteriorate and crumble in a short period of time if I left it out in the garden. I just happened to have one of those large containers which they transport fresh fruit and veg in, and end up on the counter in Aldi. They have large cut out holes for easy washing and drying, and the air can circulate around the produce while it is under refrigeration. Just the job, lucky I had one. 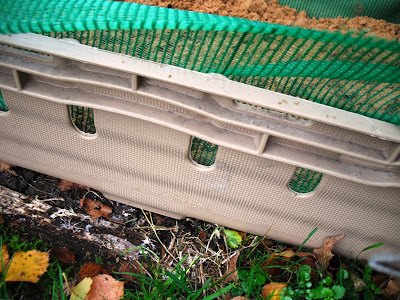 Next I needed some fine netting. Lucky that I had a large roll of this green stuff, given to me by a friend a couple of years ago. Here I have used it for a temporary fence between me and the next door neighbour. I still have lots left, another freebie. 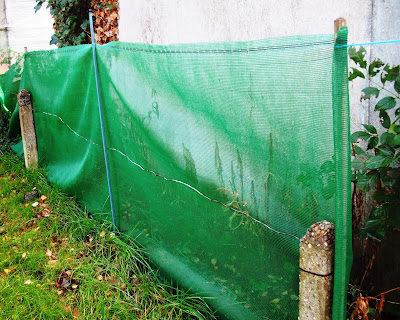 Cut off a suitable length of netting and place it inside the plastic tray, overhanging the sides. Can you see what it is going to be yet? 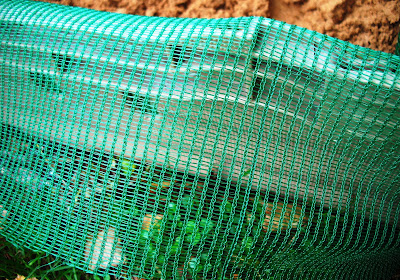 Put a layer of fine sand in the tray, about five inches deep. The sand was also given by a friend, she has loads and wants to get rid of it. Another freebie. 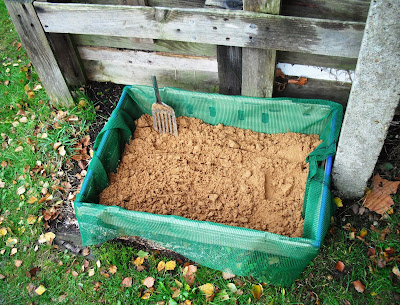 You've guessed now, haven't you. Yes I have invented an outdoor cat litter box. The idea is to try and keep mine and my neighbours gardens free from little parcels deposited all over the place. Cats love freshly dug soil to poo in, failing that they will do it anywhere around the edges of gardens, under bushes, in long grass, and in places which are well hidden. Then someone comes along to do a bit of tidying and yuk, a stinking mess which gets stuck to your boots and hands.

I wish mine would do it in the middle of the lawn where I can see it and pick it up. I do try and encourage them to use the litter boxes indoors, much more convenient and safe. Bugsy the old boy is ok with that, but the two young ladies are ready to dash out the back door into the garden first thing in the morning. Hopefully they will find the new outdoor litter box, and I can scoop the poops out of there and the rain will wash the piddle straight through. We shall see, I'll let you know what happens next.
Toodle pip
Posted by Meanqueen at 12:18