I did something yesterday that I have never done before. I was in town and I noticed a posh jewellers shop with a sign outside that said Gold Bought Here. I had thought about selling my mothers wedding ring, but couldn't get it off my finger. Several months ago I went into a jewellers to ask if they could cut it off, they said they couldn't because they are not insured to do that. So I didn't bother to try anywhere else.
The ring has been on my finger for 28 years, ever since my mother died. It had bent into a funny shape and I managed to straighten it with a pair of pliers, it still wouldn't come off though. There is no reason for me to keep the ring. My mother wore it long after her marriage broke up, though I'm not sure why, it was an unhappy marriage.
I have struggled to get the ring off my finger for ages, and given up, but yesterday I was stood in front of the shop twiddling with it and it came off. I don't know how, my hand must have shrunk. I went in and asked what the value would be, how much would they give me for it.
I felt a bit embarrassed asking actually, it's not like I needed the money, I just didn't want the ring. Anyway, the valuation was £8.30, it's a very thin band of gold. The nice young lady seemed almost apologetic when she told me, she probably thought I would expect more. I didn't know what to expect, having never done this before. She suggested that I might like to try other places to see if I could get a better price. I was on the verge of accepting the cash, but then thought, ok,  I'll look elsewhere.
The next place was another jeweller, they offered a miserable £5, no thanks. I almost went back to the first shop, then I remembered Cash Converters just round the corner. Worth a try. The young man took it into the back room and returned with an offer of £10. Well thank you very much, that will do nicely. Wooohooo, made £10 today :o))
Seems strange looking at my bare hand now, but I'm still wearing a silver ring that my mother wore, I won't sell that one, it means a lot to me.
I've just had a look in my box of bits, mainly broken jewellery, and found my own gold wedding ring. I wasn't actually married, just lived with him for a couple of years. I remember going into a jewellers shop with him to buy it, he didn't want to bother, but it was at a time when people didn't live together out of wedlock, and I wanted to look respectable. We moved to a new area and I got a job, I called myself Mrs. The relationship didn't last he turned nasty and was horrible to me, so I moved out.
I might go back to Cash Converters and see what they will give me for this ring. Might as well, I don't need it any more. 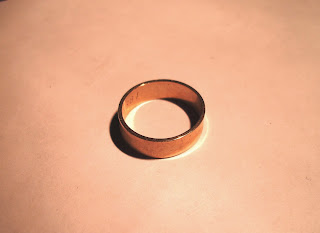 I wonder if there's any gold to be found at car boot sales, might have a look when I next go. Could make me a bit of pocket money. Probably not, I think most folks are savvy now. Bye the way, this isn't an advert for Cash Converters, there are plenty of other places which buy gold.

Hey, what about this then, a doggy party on the hills this morning. I love it when they all turn up at the same time. The dogs chase about and the blokes chat. The topic this morning was the recent Rugby game in Hull. I didn't join in, ha ha. 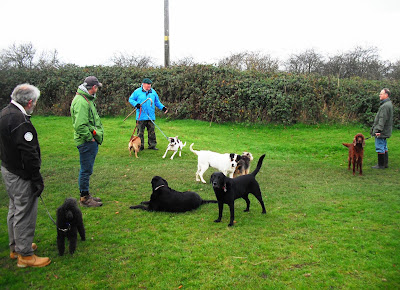 Have a nice weekend.
Toodle pip.
Posted by Meanqueen at 12:07