Hello. Sometimes I get fed up of going into the kitchen three times a day, then have to decide what to eat, and then spend time cooking it. Breakfast isn't too much of a chore, everything goes in one bowl, bran flakes, nuts, seeds, and fruit, milk and yogurt. It doesn't take long to knock that up.
I always try and make a quick lunch, but often I end up adding a bit of this and a bit of that, and before I know it I have double the amount that I actually need on my plate. Today I made a pan of veggie curry, a mild curry, don't like it too hot. Quorn mince and chunks, frozen mushrooms, broad beans, sweetcorn, sultanas, onion, and lettuce. I was stewing some apples at the time so I put some of that in as well.
So, this is my lunch. It looks a lot but underneath it is the crust from a seeded loaf of bread. I don't know why but the crust is always twice the thickness of a slice. Must be something to do with the slicing machines. 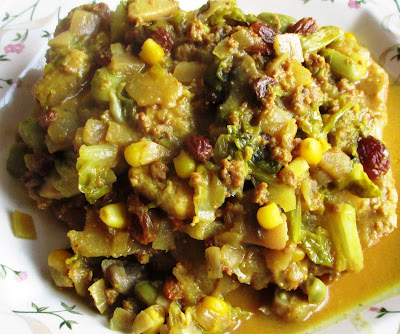 To save time tonight I have had almost the same again, only instead of the bread I made up some couscous, which only takes a couple of minutes. Tomorrow for lunch I will have exactly the same again, so it will be a very quick meal indeed. I made too much couscous, so tomorrow night I will be looking for something to add to that for my dinner.

I never know what I am going to eat until I open the fridge and cupboards, and see what's left. I like surprises.

Are you ready Walking Group? Tomorrow is the last day of November, on Friday it is check in day. Let's have some numbers please. I have just managed to make the 100 this month, now on 1103. It was touch and go, the weather has been awful today, didn't really want to go out, but I did. It has to be done.

Thanks for popping in, we'll catch up soon.
Toodle pip
Posted by Meanqueen at 19:18