Hello. You can say what you like about Katie Hopkins, you can throw all kinds of insults her way, threaten to kill her even, but she will always respond with an equally harsh put down, enough to knock the wind out of the sails of even the most persistent bully. Katie must be one of the most trolled people on the internet, yet there is no sign of her scurrying away into her little hole in the ground. This woman is for fighting her corner, and is not afraid of using whatever ammunition she sees fit. 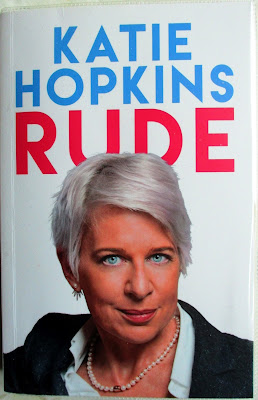 I first saw her when she was on The Apprentice a few years ago, she was determined to claw her way into the finals, whatever it took. When she got there, she told Sir Alan what he could do with his money, and walked out. I thought then that she had balls, but never imagined that she would propel herself into notoriety at such a breakneck speed.

Katie has a lot to say for herself, on most topics in the news today. It seems she has lots of opinions which she is keen to voice to anyone who will listen. Her choice of language is always direct and straight to the point, often littered with insults and name calling. She believes she is speaking for the thousands who are afraid to say what they are thinking, for fear of being labelled with whatever name is in fashion at the moment. Look what happened to me four and a half years ago when I said the UK is full up and didn't have room for any more. Some agreed with me, but I was also shot down in flames with readers saying they would never visit my blog again. Katie has a point, keeping your mouth shut for an easy life is far preferable for some than being trolled and bullied for your views.

Anyway, love her or hate her, I read the book because I wanted to know what drives her. I don't agree with everything she says, but a lot of what she says does make sense. She deliberately uses shock tactics to get her points across, in my opinion that works sometimes but is not always necessary.

The book. It's about her earlier life before she was famous, her travels to different countries, roughing it in remote parts of the world, her turbulent career, her battles with epilepsy and finally overcoming that with a brain operation. She talks fondly about her husband and children, as a wife and mother. The last part of the book digs more deeply into the reasons behind some of the opinions she has about politics, lifestyle, and religion.

I found a lot of the colourful attention seeking phrases she uses a bit silly and a bit school girlish, I felt they were inserted to embroider an elaborate picture around the ordinary bits of her story. Maybe that's how she speaks in everyday life anyway, I don't know.

There were parts of her story which gripped my attention. The graphic descriptions of what happens during an epileptic fit were quite shocking. I used to work with a girl with the same affliction a long time ago, and had forgotten how brutal the fits could be.

It's on the whole an easy read, but I found myself fast forwarding a bit through what I would call ranting. Maybe ranting is her thing. I don't rant myself, preferring a more laid back and calculated  approach to life. I didn't get through 32 years as a lorry driver by ranting, I got through it by steadily plodding on, believing in myself and knowing I was on the right track with my life.

Read what you like into her newspaper articles and videos, but there is another side to her. She is  intelligent, even though she puts some of her opinions across in a cruel and unorthodox way. I think she's going to be around for a while.

I don't buy books. Check your library to see if they have a copy.

It's snowing quite heavy here. No walking today. Don't forget to check in with your miles tomorrow. Thanks for popping in, we'll catch up soon.
Toodle pip
Posted by Meanqueen at 15:26