Hello. Look what I made. Wind chimes with spoons and forks which came from the Village Hall. There was quite a lot of them so I thought I would keep them and make something. First stop yoootooob videos for  ideas. Some of them showed drilling holes in them, I can't do that, then I found one that wrapped wire around them, and luckily I have some pink wire that was given to me for Christmas. 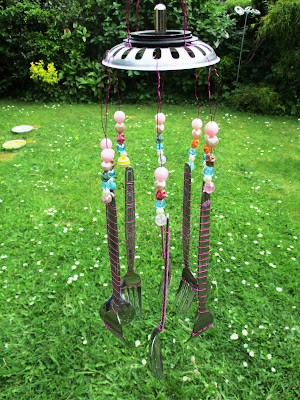 The round metal thingy with holes in it is a plug hole for the waste pipe from a kitchen sink. Brand new found in a skip. I pick up all sorts of odds and sods thinking they might come in useful, and it has. 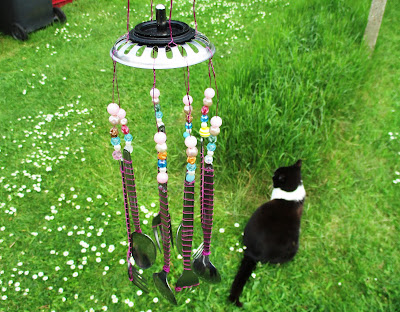 The pink wire looks really nice. Starting at the bottom I wrapped it tightly, and put a dab of super glue at the top so it wouldn't slip off. 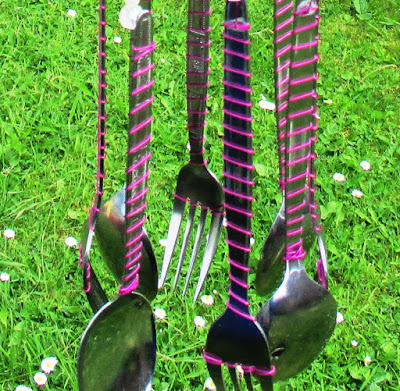 There are eight pieces of cutlery and a few colourful beads threaded on each one. 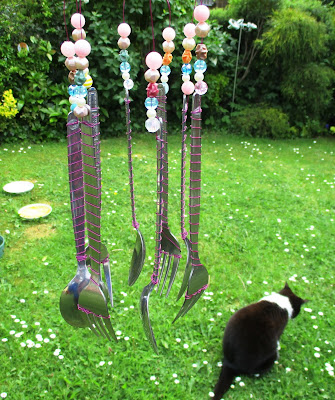 It's hanging on the washing line for the photo's, I shall have to find a better place for it. 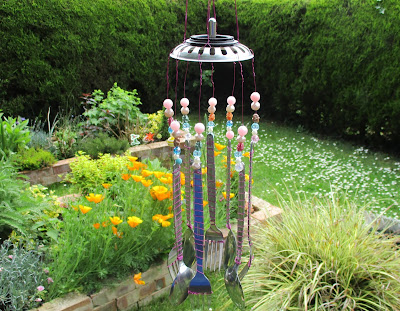 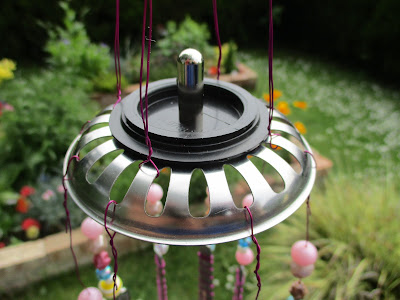 I have bent a fork to make a hook at the top,. and bent the prongs to hang four separate wires from. In the video it shows heating the metal to make it easier to bend, but I just used two sets of pliers and brute force. Also in the video it says use a hammer and flatten the cutlery first. I tried it with a fork and a spoon but didn't like the look of it, so I didn't bother. I like it just as it is. 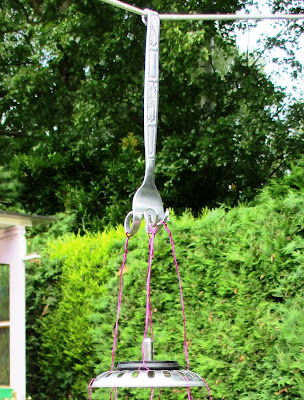 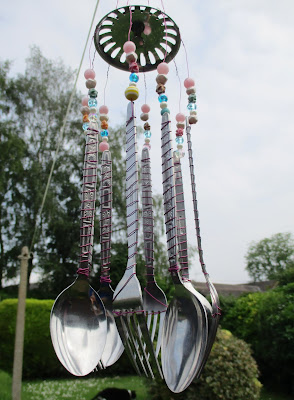 It looks really nice, I'm pleased with it. Something else to decorate the garden with. All I need now is some wind.

I've been to Tesco this afternoon, visitors are coming tomorrow so I needed to get some nice food for them. We are having lunch out, then back to my place for pudding and drinks, and I have enough for a buffet tea depending on how long they are staying. Will be a nice change, they have never been before. I hope it's sunny so we can sit out in the garden.

Don't forget to check in with your walking miles on the post yesterday. I hope you are having a nice weekend. Thanks for popping in, we'll catch up soon.
Toodle pip
Posted by Meanqueen at 19:36