Hello. Looks like I caught the sun yesterday, red arms and red neck. The day went really well. It started off a bit slow, the first visitors were my friends Janet and Paul, they wanted to do half the gardens before the football, and the other half after the football. I think others had similar ideas. There was a road closure through the village in the morning for the 10k race, which probably delayed some people getting here.
An early visitor was blog reader Liz, she brought two friends with her from Nottingham. She kindly gave me a big box of  fabric, which will come in useful for some of my projects. Thank you very much Liz. I haven't a photo of her, she took one of both of us on her phone, but I completely forgot.
Another blog reader visited, this is the second visit for Nick. Very nice to see you again. Love her outfit, fabulous skirt. 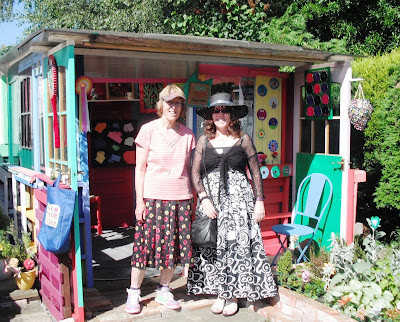 This gentleman is not a blog reader, but he tells me his wife is. Tall Paul was very chatty, and tells me his wife has picked up all my money saving tips and they are saving up towards moving north for a cheaper lifestyle. 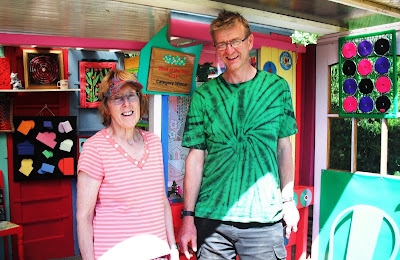 I tried to talk to everyone, at one point I wondered if a bus had discharged it's passengers outside. Quite a crowd had all arrived at the same time. I'm afraid I couldn't give them all the attention that I would have liked, so they were left to wander around for themselves.

I put all the painted rocks around the garden and told people to take one if they see one they like. Many people did, and at the end of the day I only had a few left. This morning I left two of them in the village as I walked through to Crafty Club. When I walked back later I noticed that one of them had gone. This afternoon I saw Ken in town and he said he had picked up one of the rocks to give back to me. He thought someone else had taken it and left it there. I had to laugh.

I had to take a photo this morning, this is Mayze cat saying, 'you might want to get up early, but I don't, I'm staying here'. She always lies in longer than me. 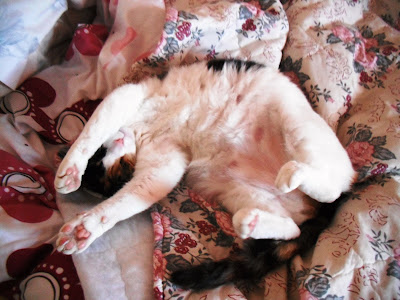 Heidi prefers the window ledge, hidden behind the curtains. 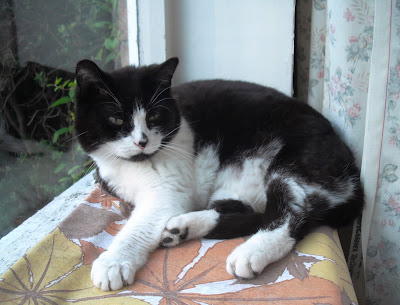 Six o clock in the morning and there are two little faces looking up at me. 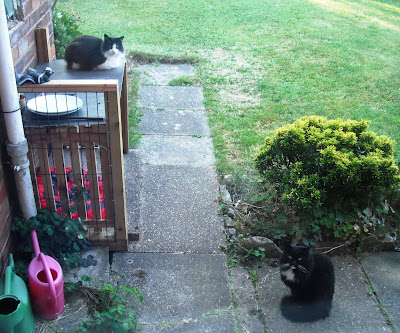 I've got to catch up with the walking, it's too hot during the day, so I'm going out now. It's not long to the end of the month and I am a bit behind due to being busy with other things.

Thanks for popping in, I have some pictures of Saturday's Village Fair so I'll put them on tomorrow.
Toodle pip
Posted by Meanqueen at 20:29