Twas a beautiful sunrise this morning, I rushed outside to take a few snaps. 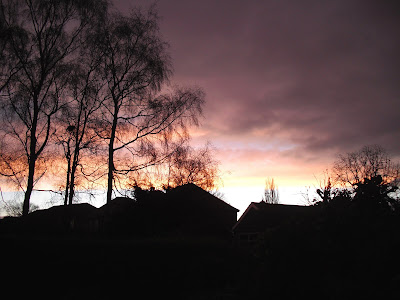 Isn't it amazing how the sky looks like it is split in half. 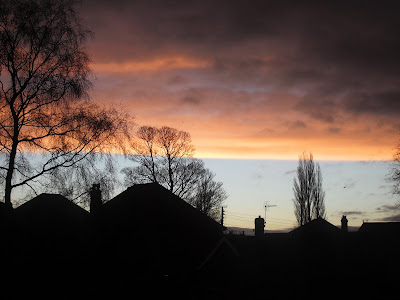 I wonder what makes it do that. 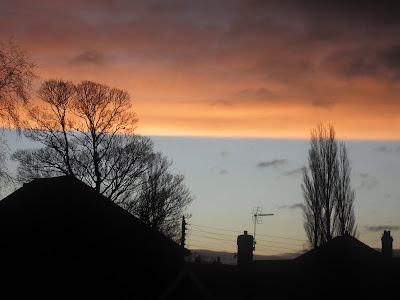 Then the clouds came over and in a few minutes it was gone. 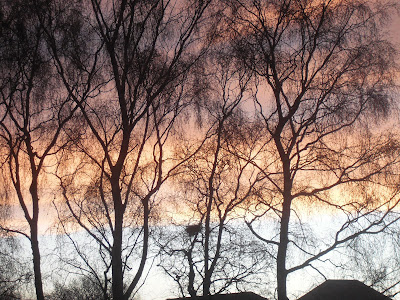 Whatsitlikewhereyouwork asks if I am giving up coffee. Hi there, no I wont be, I like coffee, well Nescafe actually. I am cutting down a bit though, mainly because I can't drink it without sugar. I am having one mug on alternative days for breakfast, instead of every day.

Today I had no coffee, and made a smoothie with these ingredients, this is a dinner plate. Ten grapes, one carrot, one orange, a few pieces of apple, some pineapple, and three teaspoons of seeds. Add water and blend, first on slow speed then whizz it fast. 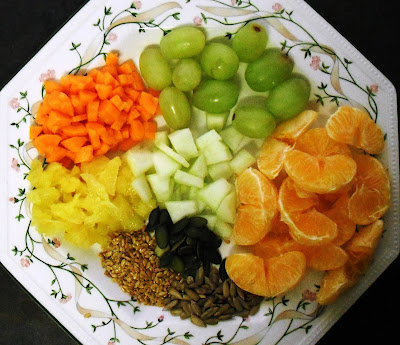 Eat with a long handled spoon, straight from jug. Simple. 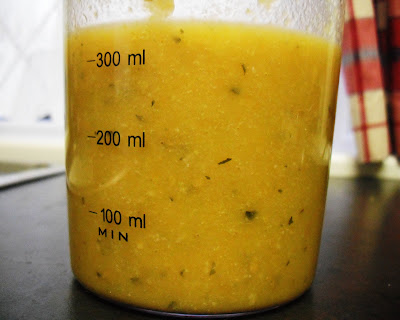 I thought it was about time I got off my bum and went for a walk today, so the computer did not get switched on this morning. Before I went however I had a bit of clearing up to do around the church. The youngsters have been partying and left a bloomin mess, especially around the front gate and the bench. Loads of discarded bottles and cans, some smashed up. They don't think about how this might cut the feet of passing dogs, quite a lot of people walk through here on their way to the hills. I took my sweeping brush, a small dustpan and brush, as well as my picking stick. Job done.

I walked into town because I needed some eggs from B & M store. Some of the route is across the fields, some along a country road, and some on a main road. I was a bit sad to see this beautiful pheasant lying dead by the roadside. It was probably hit by a car as it dashed across from the woods. Poor thing :o( 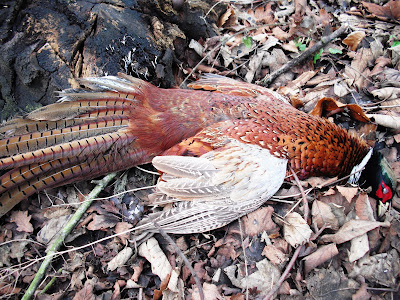 I purchased six eggs for 95p, only buy free range, a small pot of black pepper for 39p, and I found some packets of shiitake dried mushrooms, 29p for four. Apparently they are supposed to be good for you, so the book says, worth a try for that price.

I thought about getting the bus back, but I still had loads of energy so I thought, no, walk back. I need to keep my fitness up, ready for the long days and I can start walking longer distances.

I called in at the Cash and Carry as I was passing. They have some out of date (Aug 2011) tins of John West tuna chunks in brine for 50p. It's a good job I took my rucksack, I bought eight tins, although I won't be eating most of them, the cats love it for a treat. I asked the man if he had a lot in stock, because they tend to have limited supplies. He said they have 60 cases, so I might get some more when I am passing in my car. I used to get Tesco Value chunks but they have gone up from 45p to 75p, a horrendous price increase which I wont pay.

Anyway, I was approaching my village as the sun was going down. Look how it bathes all the trees in a red glow. I deliberately left my shadow in there. 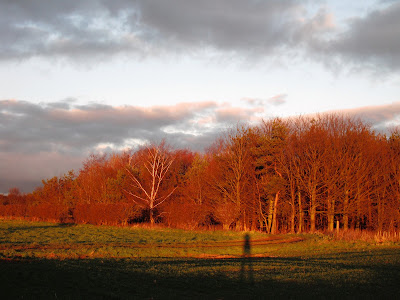 This bit of the walk is very nice, hardly anyone ever uses this route. 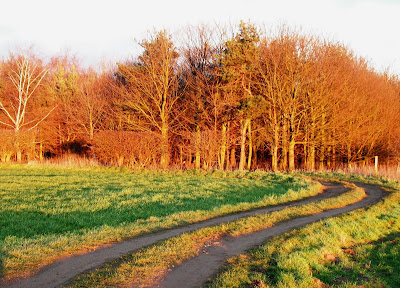 The windmills just the other side of the road, over the hedge, and the marker post saying turn left. 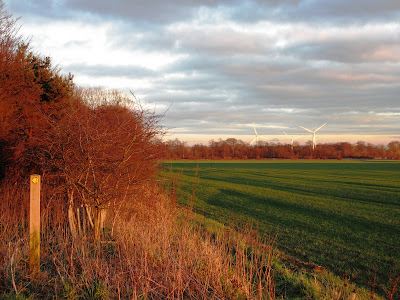 Almost home now. The sun will disappear in the next few minutes. 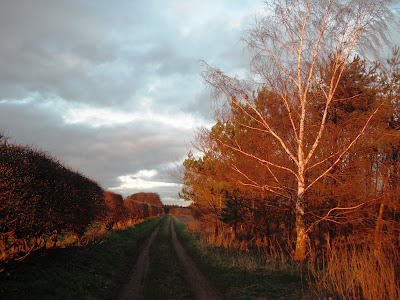 Tonight my dinner was a plate of steamed vegetables with half a tin of tuna fish. I had to open a second tin. As soon as the fishy smell wafted through, I had four cats in the kitchen meowing like crazy, even Garcia the neighbours cat was licking his lips in anticipation. Toodle pip, catch you tomorrow.
Posted by Meanqueen at 19:18