Getting up my nose

We have snow, boo hoo :o( I don't want snow. I did all the pretty snow pictures last winter, have I got to go out and take them all again, or can I slip in a few from the archives and hope no one will notice :o) Oh heck, Mathew wants photo's. At the moment it's blowing sideways, if it keeps up I won't be able to see my car on the front in the morning. Suppose I'll have to do some shovelling. At least there will be one consolation, I won't have to do any litter picking, I won't be able to see it.

I was in town again today, looking for a few items on my list which I missed yesterday. I was feeling really hungry despite having two breakfasts before I left the house. First thing I had bran flakes, then at about 10.30 I had a pan of porridge (yes I eat that out of the pan as well), plus I stirred some of the stewed apple into it, luvverly jubberly. Anyway I needed something to keep me going till I got home. As I was in and out of the discount stores they sometimes have some dead cheap crisps, but no luck today. Oh well, go without, I am not paying full price for anything.

Then I went to Skippingdale, there are several new shops which have moved in over the last few months, worth a look, I might find what I want. I went in Poundstretcher, they might have some reduced crisps, I am still hungry. I found a basket near the till with some out of date marked down items in there. Seabrooks crinkle cut crisps were 10p, whoopee. Wait a minute, here's a packet for 5p, even better, I delved down to the bottom of the basket and found four bags at 5p each. So I have to confess I have eaten some gunk today. There is no chance I will ever become a crisp junkie again because now I only ever buy them when they are cheap, and it takes ages to find any. Four packets at 59p each = £2.36. Cost to me 20p, result. 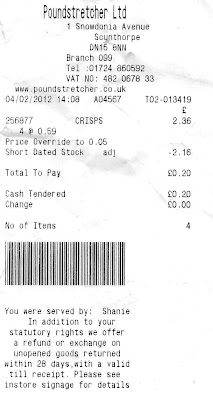 Mathew asks how I am coping with the cold. Very well actually. I have been putting the central heating on for the odd hour now and again, just to take the chill off. I must say the cavity wall and loft insulation make the place feel a lot warmer. But I now have to report that the heating has gone on the blink. I switched it on tonight and it didn't come on. I now have a flashing light on the boiler, it's supposed to be constant. So what has happened I don't know. I'll have to get the manual out and study it.

Anyway, we will manage. I have a few candles on a tray next to me, it's surprising how that makes it feel not quite so cold. Below you will see a picture of my nose, no my nostrils are not stuffed full of tissue because I have a cold, I haven't. Nor is it because my nose is cold and wet tonight. My nose is always cold and wet all the time. I really don't know why, I get fed up of constantly wiping the drips off, so the easiest way to control it is to stuff tissue up there. It works, my nose is warm and non drippy, ha ha. I do this when walking sometimes, a bit embarrassing if someone sees me because I didn't have time to whip 'em out :o)

My food stocks are very much depleted, and I am scraping the bottom of the barrel now. Tonights dinner is a serving of this mush, I put some in a dish because this pan is too big to hold while I eat it. In it is the last of the carrots, potatoes, the last two onions, and broccoli, half a tin of chick peas, some frozen peas, bulgar wheat, and split peas. Someone mentioned about how long it takes to cook pulses out of a packet. I simmered the split peas for nearly an hour, then added the rest and simmered some more, and still they were hard. I will use up what I have got, but think I will stick to tins from now on. After chomping through it tonight the rest will be zapped with the blender tomorrow, to break it down, it will make a nice soup. 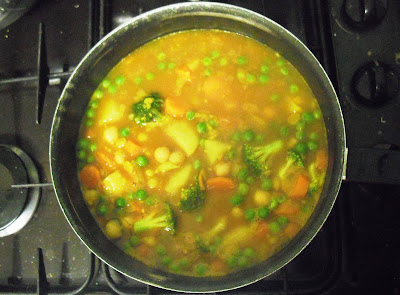 Not a lot left. Just seeing how low I can get it, eating everything I have. Plenty of tuna of course from my bulk buy. I am not adding the whole total of this into my food diary, I am adding a tin when I eat it, the cats will get more than me. I have loads of cuppa soups, most of which people have given me. I am not a fan of these so I mostly use them to flavour soups and stews. 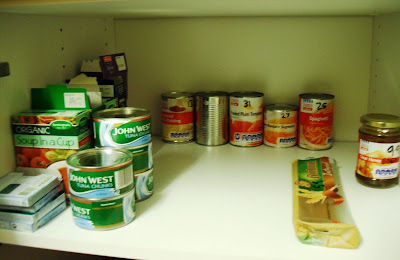 A few seeds, pulses, couscous, bit of rice, some bulgar wheat, some sultanas. 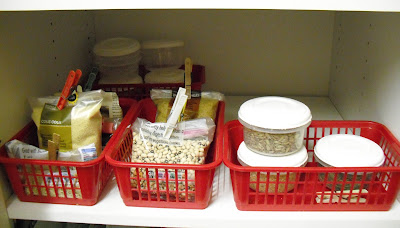 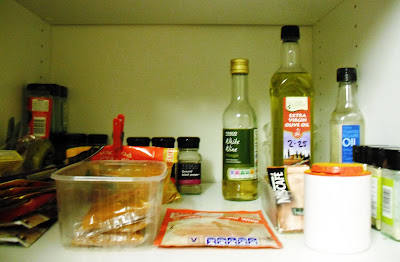 The fridge is bare, freezer has four loaves, three pieces of salmon, a few peas, and my elderberry ice cubes, the frozen juice I made in the summer. I add this to my fruit drinks, I'm sure it's helping me to avoid catching a cold.

I have porridge oats, bran flakes, and tea and coffee in the top cupboard, oh and some cans of cider. That's about it. I'll see what I can cobble up for tomorrows meals, should be fun.

Thank you all for your suggestions for the little pink pot. I'll have a think about it, so many ideas. It would be usefull for pills but I don't take any. Dog treats, not big enough, my pockets are usually bulging with them. Don't use lip balm, don't like it. I like the idea of vaseline for sore feet, or moisturiser. No rush, something will come to me.

I've just looked out of the window, the snow is still coming, loads of it. It's about a foot deep now. An early night I think, sleep tight.
Posted by Meanqueen at 18:59